For the sake of authenticity, the author, a newspaper industry veteran, restricts his scrutiny to the print media 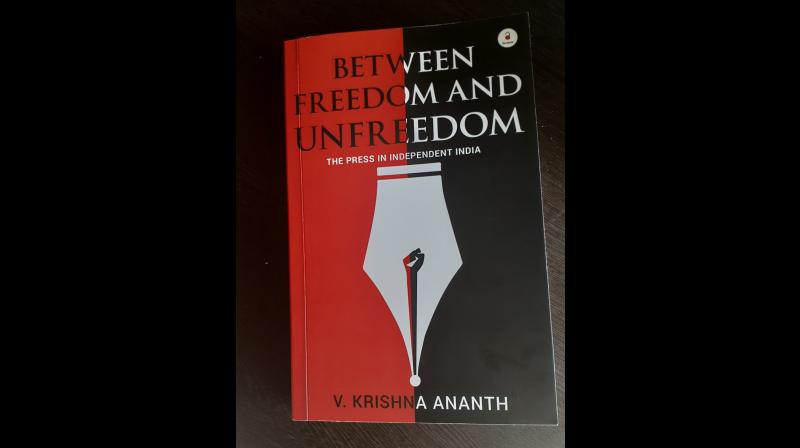 Cover photo of 'Between Freedom and Unfreedom: The Press in Independent India' by V. Krishna Ananth. (Twitter)

Incarcerations, FIRs, dismissals, spiking of stories, sensationalism, fake “breaking news” and the compulsion to not miss a trick in the rat race against the Joneses. Lack of resources or intent to devote them to newsgathering from the heartlands. Selling the narrative before finding the story.

These form a brief glimpse of the challenges facing the media, the freedom of which has come under a question mark since the 1990s, the author posits, rather than in the past septennial, but which looms larger, if it were possible, during the pandemic. Hence this overdue analysis of the Indian media business’ shortcomings. For the sake of authenticity, the author, a newspaper industry veteran, restricts his scrutiny to the print media.

The question then arises, what influenced Prime Minister Nehru to pass this amendment? The answer — the spectre of Hindu-Muslim riots and a court case involving a little-known Bengali pamphlet called Sangram. Borrowing from works of published poets heavily and out of context, its ambitious writer issued through it an unsophisticated call to arms against “injustice, oppression or wrong”. The Bihar government found it objectionable under Section 4(1) of the colonial-era Indian Press (Emergency Powers) Act, 1931, which cited public order and foreign relations as reasonable curbs on press freedom. The printers moved court in 1949; the law was declared ultra vires (The State of Bihar v. Shailabala Devi, Patna high court, October 1950). This judgment was later (May 1952) struck down by the Supreme Court but by then it was too late. The first amendment passed in 1951 had already brought back these curbs — in the form of Article 19(2) of the Indian Constitution.

It is the courts in our country that have been the great champions of press freedom. The evidence? Romesh Thapar (1950), Brijbhushan (1950) (each from opposite ends of the Left/Right political spectrum), Sakal Papers (1962), The Indian Express Newspapers (1985). The crowning moment came during Emergency (1975-77) in the Freedom First (Minoo Masani) and Bhoomiputra cases (each representing a side of the libertarian/authoritarian divide). Unfortunately, both these papers had been non-mainstream publications. With the honourable exception of the Indian Express and the Statesman, all other national dailies surrendered to the Establishment.

The Shah Commission report of 1978, a valuable resource for researchers, categorises these papers as “friendly”, “neutral” and “hostile” in a list prepared at the behest of then information and broadcasting minister V.C. Shukla for use in the framing of the Indira government’s advertisement policy. Those considered friendly were rewarded and those deemed hostile punished. The Amrita Bazar Patrika was paid far more than the prevailing rates for advertisements.

The impulse to cater to the lowest common denominator rather than nurture, or even create, at the very least a discerning niche is what dumbs down the media, but more critically, cancels original commentary and important coverage. Typically, in deciding the content, the editor/proprietor adduces this denominator in the form of a presumption of their putatively “middle-class” audience’s tastes to hide the reality that their own vested interest is aligned with the guilty party’s. The presumptions usually take the form of deterministic interpolation of their own biases into populations without a voice (in some contexts, this is referred to as “colonial consciousness”). All this is couched in the language of glib neoliberalism to get the employee on board.
The author cites the excessive coverage of the 1990 Mandal Commission protests in comparison to the scant attention devoted to L.K. Advani’s rathyatra to make his point. In so doing, he calls out a well-known newspaper for achieving a 9:1 ratio in terms of dividing that space. He also flags the arrival of fellowships in 1992 in order to relegate reportage on social issues to notified corners of the paper. But the most insidious development of that decade, he observes, is the appearance of contracts and individual bargains to replace the Wage Boards.

The other shoe has fallen. The Working Journalists Act of 1955, unlike the contract system, did not allow barons to close down editions and send journalists out of a job, as was seen in the wake of Covid-19, the author writes. The contract system has also promoted editorial frailty even though the law does not give the business owner the right to dictate what news should be printed and what should not be, nor the manner it should be presented. Most of all, it has led to a preference for the young and the passionless, over the seasoned and the committed reporter, analyst and editor.

The reader is left looking for a closer interrogation of the state of the media industry in today’s times.