Books   04 Jul 2021  Book Review | ‘Many of us drift into friendships, but Ram takes his very seriously’
Books

Book Review | ‘Many of us drift into friendships, but Ram takes his very seriously’

Over the last twenty years I have known Ram in various guises, but there are earlier incarnations that I could not know 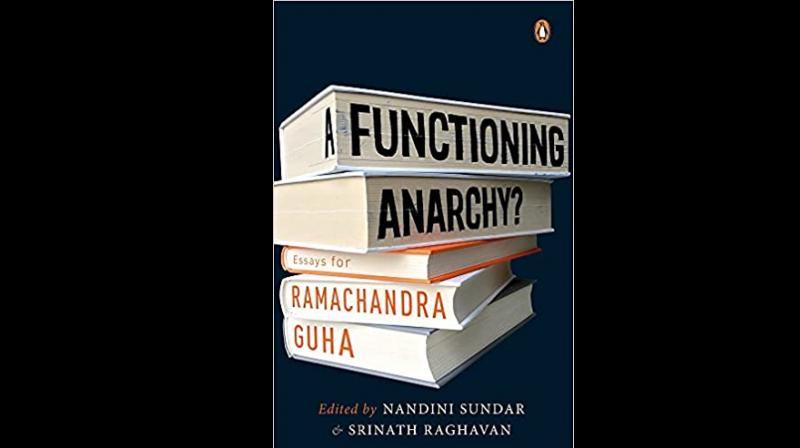 My first impression of Ram Guha was that he was like an intellectual of about sixty or seventy years ago. With his rough tweed jacket and baggy trousers, his tousled hair, his round-lensed spectacles and his rather shambling gait, he looked like a figure of the 1930s; underneath his jacket he wore a patterned jersey that might have been knitted for George Orwell. Furthermore, he talked in the way that bhadralok scholars used to talk, rapidly and excitedly on a very wide range of
subjects.

Yet, I soon realised, he was not really garrulous — an adjective much used by British rulers to denigrate Bengali intellectuals — he was simply more interested and better informed than almost anyone else. About twenty years ago we went to Trent Bridge to watch a cricket match, I in my stripy blazer, he in his tweed jacket and Orwell’s jersey. We travelled to the ground with Sunil Khilnani and my son in a motor car, a rather ropey old vehicle that Sunil had recently bought from a friend. It was a day–night match, an one-day international (ODI) between Australia and Pakistan, and as we returned to the car park shortly before midnight, Sunil suggested that, as he had only recently passed his driving test and had never driven in the dark, it might be better if I drove home. Reluctantly, I agreed, and, while I navigated the outskirts of Nottingham and set off on the long dreary journey down the M1 to London, Ram in the back seat kept up an inquisition that lasted two hours. Had I read the current issue of the New York Review? Did I agree with so and so’s piece in the latest Times Literary Supplement? What did I think of a denunciatory article in the London Review of Books? He is sometimes a difficult chap to keep up with.

Over the last twenty years I have known Ram in various guises, but there are earlier incarnations that I could not know. I never knew Ram the anthropologist, Ram the trainee sociologist or Ram the nearly-Marxist, the Calcutta student who gave away his cricket books in order to find room on his shelves for a Marxist library that included the ninety volumes of Lenin’s collected works. Nor, more regrettably, have I seen much of Ram the ecologist, although we have similar views on the environment — we have been on expeditions into the Nilgiris, and we have enjoyed good country walks in Britain, in the hills of lowland Scotland and southern England.

The first Rams I was acquainted with were Ram the fledgling biographer, then struggling through several drafts of his biography of Verrier Elwin, and Ram the historian of Indian cricket, a subject he found easier to write about and which resulted in what I consider his most enjoyable book, A Corner of a Foreign Field. Yet, whatever difficulties he had with Elwin — with an Indian editor (helpful though he happened to be), with Western publishers (unhelpful though they were) and with his own problems in making the transition from anthropology to biography — Savaging the Civilized is a wonderful book. Not the least of the book’s charm is the way that it is amiably sprinkled with cricketing metaphors, with how Elwin might be ‘stumped’ or forced ‘onto the back foot’, and how some Indian minister would go ‘out to bat’ on his behalf.

The next Rams I knew were the Rams that everyone knows, Ram the biographer of Gandhi and Ram the chronicler of modern India. These are great books, which I read in draft form, but I do not think there is much point in my talking about them to an audience, which knows so much more about these subjects than I do. Instead, I would like to say something about Ram the essayist and political journalist because his articles reveal more about his mind and his character than anything else he writes.
An English journalist once said of my father, Ian Gilmour, a left-wing Tory who was a minister in Ted Heath’s government and briefly (until he criticised her) in Margaret Thatcher’s, that he was a man of ‘liberal views, illiberally held’. Much the same could be said of Ram, who liked — and was liked by — my father, and who once described himself as a moderate who sometimes expressed his views in ‘an extreme fashion’. I think that one of the best decisions he ever made was to refuse a professorship in Delhi, which would have made him part of the ‘academy’. I am someone who rejected academic life because I wanted to write about different subjects and different countries, but Ram had more serious reasons. He wanted to be independent, not to be part of any ‘school’, not to have to defer to colleagues or to the prevailing fads of a particular department. He is not an intellectual of the seminar or the cafe table but a scholar of the archives and his own desk. He rejected the academic fervour of Delhi for what, in intellectual terms, is the backwater of Bangalore.

Ram’s independence has allowed him to attack, at some personal risk, targets in all areas of the particular spectrum. He will assail with equal vehemence both the enthusiasts of Hindutva and the communists of West Bengal. Yet he will also criticise those parties and their representatives that might be closer to him in ideological terms but have failed to perform their duties, whether because they are corrupt, stupid or merely incompetent. If I were Rahul Gandhi and I had read Ram’s articles, I would long ago have disappeared from public life.

I will end on that most personal note, that of friendship. Ram is someone who takes friends seriously. Many of our generation seem to regard friendship as a rather fluid phenomenon, something that prospers with the help of proximity and occasion and which tends to fade when faced by distance or unavailability. Ram will have none of this. Friendship is friendship, whatever distant continents the friends might
live in.

Many of us drift into friendships, after rather liking someone at a dinner or a cocktail party; it is often a casual, take-it-or-leave-it affair, something that doesn’t really matter whether it works out or not. Ram is different, in this respect as in so many others. If he wants someone as a friend, he will travel hundreds of miles to ensure that the friendship is kept flourishing. I will never forget how twenty years ago he came to do some research in Edinburgh, where I then lived, and, following an introduction from a mutual friend, turned up at my doorstep in tweed jacket, baggy trousers and Orwell’s jersey. He was at his wittiest and most irrepressible, perhaps even ‘garrulous’. Afterwards, he summed up the encounter in a sentence that may not have been his most stylish but which perfectly described the episode, ‘I felt that we hit it off first ball.’