Reinventing Kabir in an age of bigotry and unreason

The 15th century Kabir has perpetually remained an enigma. His faith, religion and beliefs were all suspect. 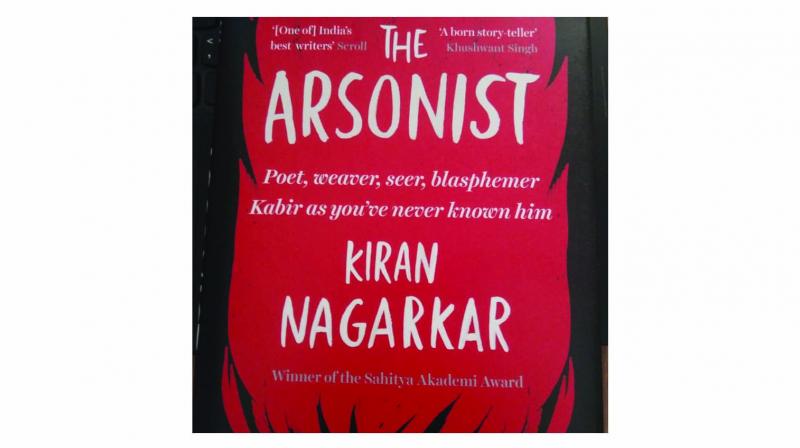 The Arsonist by Kiran Nagarkar inhabits two worlds, as it were. His protagonist, Kabir, while wrestling with dilemmas about work and relationships, is convergent with the 15th century mystic saint and Bhakti poet who had answered to the same name. Is there a continuum of values and challenges being faced by two Kabirs separated by six centuries?

The book draws a parallelism between the two Kabirs and leaves the reader to decipher as is his wont. Even as you flip through the seamless chapters, each dealing with its own message, it urges you to ponder over the imponderables, access the inaccessible and try and reach out for all that is latent in us and which call for an answer. We have ruminated on these issues sometime or the other, even as they are beleaguered by sundry other everyday thoughts. We have wanted answers or at least wanted to engage in some soul-searching exercises that have forever evaded us.

The 15th century Kabir has perpetually remained an enigma. His faith, religion and beliefs were all suspect. But his dohas and poetry are still a part of our daily lives and have evinced Kabir, the modern thinker. Apparently unlettered, Kabir left behind his dohas which have travelled by word of mouth — gems of insightful and progressive thinking which are relevant in today’s world of discord and impatience as probably never before.

God, religion, faith — the discourse never ends on either of these pre-occupations. In recent times, the world has significantly become polarised on these obsessions that are ruling the planet now in the name of hate wars and religious terrorism. Our good sense for peace and rational thinking slowly slips through our fingers and we do nothing to retrieve it.

Nagarkar’s Kabir, living in today's aggrieved world, is a man with more than his share of human frailties —he lies, shocks and scandalises people, is over-dramatic, likes his wine and women, is irreverent and has even indulged in brigandry and robbery just to shed his extreme ennui about life. He is not perfect but he reminds us about all the values we need to pay heed to.

The stories are short, pithy, often witty and always end with a Kabir doha, duly translated in English. Every tale stands on its own but as a bunch they all add up. The Weaver (Kabir in the 15th century was also a weaver by profession) is a fun person, who is likely to choose a woman, song or a beautiful sunset over God, because “…God has eternity on his side, he can always wait. Will the woman, the song or the sunset wait for me?” Irrefutable logic there. Because sin is fun, he says, “they should forbid God as they forbid sin, then maybe he would become far more attractive and we would all be drawn to him.” Even when he borders on impudence, he actually throws up issues we need to think about with an open and unbiased mind. We starve and go through penance in the name of God and for the love of Him. But does the Almighty really want us to sacrifice? So Kabir tells a simple blacksmith who leads him to think afresh, “You taught me that one can get a little too attached to selflessness. You taught me that at the end of the day, a man must renounce renunciation itself.”

The book, at a certain level, almost runs like Aesop’s Fables. The tales tell their own narratives, each touching a raw nerve. So we have casteism, religious divisiveness with fanatics mowing down sensibilities (where “God ends up as the mass murderer in every faith”), subjugation of women in our society, the dichotomy between right and wrong, the never ending debate between Hindus and Muslims, Catholics and Protestants, the Creator and the age-old question about who created Him, and inevitably Heaven and Hell and who gets what and why. The chapters flow easily because they are liberally laced with humour, an easy style and fast paced sentences. What does mar it though are bad typos and a few grammatical errors, presumably aberrations in the editing stage.

This Kabir is today’s Kabir — he is a poet, weaver, seer, blasphemer. He belongs to an age being torn apart by hate politics and marked by a sickening rise of fascism, where thousands are being killed in the name of one’s interpretation of God and religion and where sane thinking takes a back seat to abysmal agendas. Nagarkar justifes his choice of the protagonist here when he says, “I don’t know of any Bhakti poet who has such a robust sense of irony and humour, a deep understanding of the different springs of human motivation and action.”

And a discussion on Kabir is incomplete without one of his most eloquent dohas, a couplet which reverberates with lucidity and coherence:

(Putting stones and rocks together, You build a mosque, Then climbing to the top the mullah sings the azaan, Does he think God is deaf?)