Colourful digital work of art reminds one of magical city of Macondo that Nobel laureate brought to life in One Hundred Years of Solitude. 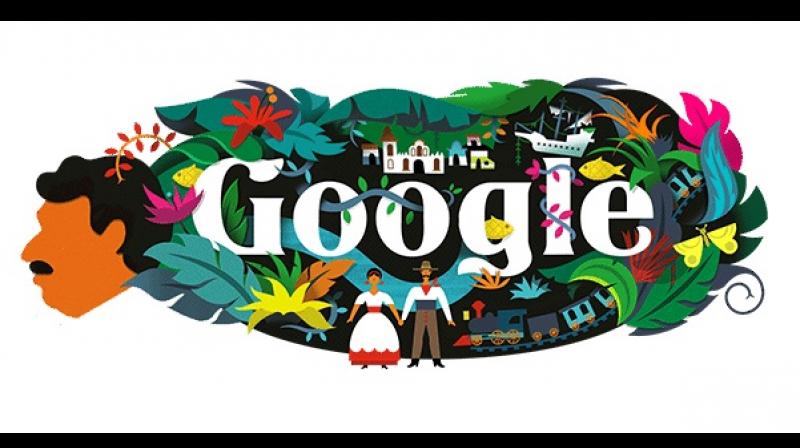 Published in 1967, the book sold over 30 million copies, and continues to be Marquezs best known work. (Photo: Google)

New Delhi: As a boy of 18, Colombian journalist-author Gabriel Garcia Marquez set out to pen "One Hundred Years of Solitude", without, of course, realising that it would be his most commercially successful work.

Published in 1967, the book sold over 30 million copies, and continues to be Marquezs best known work.

On the writers 91st birthday, Google has dedicated a doodle to the literary icon whose "star continues to shine brightly over the literary and journalistic worlds of Latin America and beyond".

The bright and colourful digital work of art reminds one of the magical city of Macondo that the Nobel laureate brought to life in "One Hundred Years of Solitude".

Created by Matthew Cruickshank, the doodle takes one deep into the Amazonian jungle, through the lush green canopy and multi-hued vibrance of the hot and humid rainforest, to offer a glimpse of the city that is home to the Buendia family.

"...one might catch a glimpse of a city of mirrors; a city separated from the world by an expanse of water and yet reflecting everything in and about it...and the site of strange otherworldly happenings," the doodle says.

The artwork is embellished with quintessential elements of Marquezs magic realism -- a little fish made of pure gold dazzles the eye and large yellow butterflies flit through the flowers; a train chugs along once in a blue moon, and the only visitors are the all-knowing, mysterious gypsies who come bearing strange tales.

Born in Aracataca in Colombia, Marquez is considered one of the most significant authors of the 20th century.

"In his long literary career, he penned over 25 books, transporting readers into a world of magical realism where they find themselves in the lush, humid tropics ? moldering into solitude or being slowly consumed by the throes of passion," the doodle informs.

Other popular novels by him include The Autumn of the Patriarch (1975), and Love in the Time of Cholera (1985).

His keen sense of political activism and courage also allowed him to author a number of non-fictional works that eloquently document the times that he lived in, News of a Kidnapping being among the most famous of these.