A manifesto for Gandhi’s ‘science’ to change world

It was a chance meeting with the author that led to discovering her latest work, The Science of Peace. 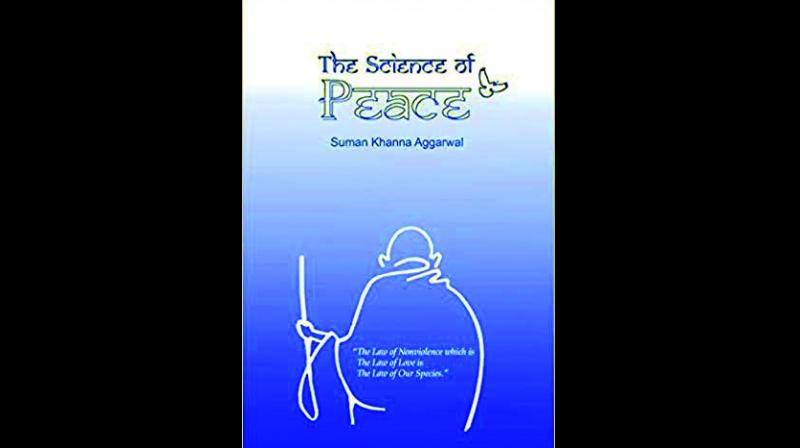 It was a chance meeting with the author that led to discovering her latest work, The Science of Peace. Usually when someone thinks of science it conjures up images of chemical reactions and white lab coats. Living in the present age one is overwhelmed by what science and its offspring, technology, is doing to our lives. Science is a broad spectrum and as per definition, it is the study of the world through experiment and observation. In her book, Dr Suman Aggarwal observes the word through the lens of what Mahatma Gandhi accomplished to achieve India’s freedom from the yoke of colonial powers.

The title of the book is not entirely an original one. In 1904, Bhagvan Das, scholar of comparative religion, wrote a book which he titled The Science of Peace. His researches were inspired by the ethos of theosophy propounded by Dr Annie Besant and her band of occult practioners. The work by Dr. Aggarwal although bearing the same title explores an altogether different field.

As a practising Gandhian and president, Shanti Sahyog Center for Peace & Conflict Resolution, New Delhi, Dr Aggarwal presents Mahatma Gandhi and his life as the one conceptual framework that could provide the world the necessary wherewithal for establishing enduring peace among warring nation states. In an easy to grasp and straightforward manner she introduces the law of non-violence and the law of love, which needs to applied with scientific precision. She argues that one needs to understand laws and scientific processes. The approach and methodology evolved by Gandhi had succeeded in freeing India from the mighty British empire. Therefore, by extension, the whole world could be transformed. The author’s personal conviction almost compels the reader to believe world peace is not only achievable but inevitable.

The book opens with a profoundly insightful foreword by Richard Falk, professor of International Law Emeritus, Princeton University endorsing Dr Aggarwal’s reasoning.  This is followed by a message from Ms Suma Varughese, Founder facilitator of The Zen of Good Writing Course and former editor, Life Positive and Society magazines.

It does not require much reflection to understand that the endowments that distinguish the human race from all other forms of life on earth could be summed up in what is known as the human spirit. The author offers in an original and illuminating manner the importance of Gandhi’s fundamental belief principles for the impending transformation of global society as a real possibility when we understand the “science” behind it. Dr Aggarwal’s contribution is both brilliant and compelling in her portrayal of Gandhi’s “highly original and historically tested approach to peace” that most urgently needs to be applied to save the planet from mutual annihilation. The madness in the all-pervasive violence that seems to have gripped the present-day world may have its root in the World War doctrine of erstwhile superpowers — the United States and the former Soviet Union —“mutually assured doctrine”. Although the Soviet Union is no more and there were great expectations in the early 1990s that at long last the sceptre of nu
clear holocaust would soon be a thing of the past, very quickly new geo-political challenges surfaced. The world is still spending roughly $3.5 million every minute on defence. The spread of international terrorism has opened the floodgates of grave uncertainties making the “unthinkable thinkable”.

The author’s highly perceptive diagnosis of conflicts and wars impels us to take a serious view of why nonviolence and a grounding in truth as far more transformative and effective than a reliance on force and militarism. She quotes Gandhi extensively in expatiating on the methods he adopted and way he dealt with organised violence during India’s freedom struggle. “The rishis who discovered the law of nonviolence in the midst of violence,” the Mahatma stated, “were greater geniuses than Newton… The Law of Nonviolence (Love) will work, just as the Law of Gravitation will work, whether we accept it or not.

The book must be savoured over a period of time and is a timely tribute to the Father of the Nation on the occasion of his 150th birth anniversary (1869-1948). Might not the appeal give rise to a historic moment for the comity of nations and particularly the nuclear armed ones to create a parallel structure that the book describes as “Nonviolent Defence Army” (Shanti Sena) for obtaining the necessary training and application of the science of peace?

The world has been held captive by powerful stakeholders who drive the military industrial complex it is high time for the world to make the desired paradigm shift and experience the fruits of peaceful living. There is no other alternative if humanity has to survive!

Tags: the science of peace