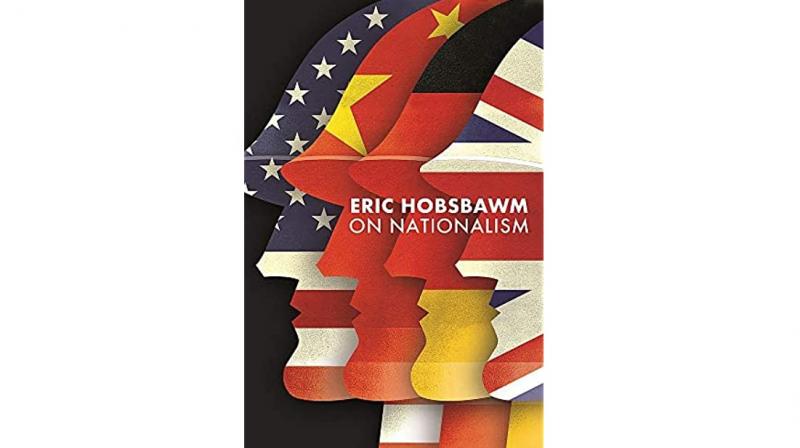 This is clearly a book that needs to be read over an extended period of time. (Photo: Goodreads)

Karl Marx, to put it mildly, disliked Capitalism. This of course did not prevent him from writing tomes on the subject. And as is to be expected not much of what he wrote on the subject was complimentary.

Britain’s best-known historian, Eric Hobsbawm, traverses a similar path in his writings on Nationalism. Despite professing a “dislike” for nationalism, the historian devoted dozens of essays on the subject.

Donald Sassoon, Hobsbawm’s historian friend decided to put together this new volume, “Eric Hobsbawm on Nationalism” nine years after Hobsbawm’s death because of the relevance of this contentious subject. We stand, writes Sassoon, “on the doorstep of an age when the internet and the globalisation of capital threaten to blow away many national boundaries while, partly as a reaction, nationalism seems to re-emerge with renewed strength”.

Hobsbawm’s views on nationalism were strongly influenced by his personal experience and views on the destructive power of nationalism as it evolved in Europe since the early 19th century. “His anti-nationalism is not surprising,” notes Sassoon. “He was a Jew opposed to Zionism. He was British but born in Egypt in the year of the Russian revolution. His grandfather was Polish. His mother was Viennese. His father was born in England. His parents married in Switzerland. His wife, Marlene, was born in Vienna and bought up in Manchester. He grew up in Vienna and Berlin, and was a boy in Germany when the Nazis took over - an experience that left an enduring impression. He wrote in his autobiography that Berlin had made him a lifelong Marxist and communist, a political project which, he acknowledged, had utterly failed.”

As a young man he took part in the Second World War, after which he went on to complete his PhD in history at Cambridge. His insightful books on economic history quickly won him a place in the top bracket of world historians. His famous trilogy — The Age of Revolution: Europe 1789-1848, The Age of Capital: 1848-1875 and The Age of Empire: 1875-1914 — is mandatory reading for most students of economics and history.

According to one reviewer of his works, Iker Itoiz Ciáurriz, “…Hobsbawm was a fierce critic of nationalism. A close analysis of Hobsbawm’s work, especially his ‘Age’ quartet, The Age of Revolution: Europe 1789-1848, The Age of Capital: 1848-1875 and The Age of Empire: 1875-1914, and The Age of Extremes: A History of the World, 1914-1991, reveals Hobsbawm’s evolving scepticism and opposition to nationalism. He would come to argue that nationalism, driven by industrial capitalism, undermined the universalist goals proposed by revolutionary movements, particularly in Europe."

Hobsbawm argues that nationalism is a relatively recent construct and mainly a European phenomenon. The rise of nationalism coincided with the emergence of an educated class in various European regions and the rise of the bourgeoisie. He felt that nationalism outside Europe was largely a consequence of European imperial power.

However, he did not entirely disregard the positives of nationalism including, most importantly, the rise of democracy that eventually accompanied nationalism. At one point he conceded: “I remain in the curious position of disliking, distrusting, disapproving and fearing nationalism wherever it exists… but recognising its enormous force, which must be harnessed for progress if possible.”

It would, therefore, be incorrect and unfair to dismiss or classify his writings on nationalism to be wholly critical. He was too great a historian not to recognise the nuances and many implications of the processes and constructs associated with nationalism.

For instance, Hobsbawm cautions against a new trend emerging around the world, based on the demand of self-determination and the rise of nationalistic feelings within existing nation states. He voices his concerns in the chapter on “Perils of the New Nationalism”.

Referring to the relatively recent creation of small and tiny nation states, Hobsbawm writes: “Of course such states — even much larger ones — are not independent in any meaningful sense. Politically and militarily, they are helpless without outside protection, as Kuwait and Croatia show. Economically, they are even more dependent. Few separatist movements hope to go it alone.”

“The usual reason given by would-be state builders is that the people of the territory concerned have constituted a ‘nation’ from the beginning of time, a special ethnic group, usually with its own language, which cannot live under the rule of strangers. The right of self-determination, they argue, implies states that coincide. Almost everything about this argument is historically wrong, but as Ernest Renan noted more than a century ago, ‘Forgetting history, and even historical error, are an essential factor in the formation of a nation.’ However, we are concerned not with history or rationality but with politics.

“However, if we can understand the forces that led to a revival of the politics of national consciousness, and even sympathised with the feelings that inspire it, let us have no illusions. Adding another few dozen to the member states of the UN will not give any of them any more control over their affairs than they had before they became independent. It will not solve or diminish the problems of cultural or any other autonomy in the world, any more than it did in 1919.”

This, therefore, is clearly a book that needs to be read over an extended period of time. There is much to ponder over. Perhaps it's not for everyone either. Large parts of it would be totally incomprehensible to readers who have little or no knowledge of European and world history. But those who can persevere will find much fodder for the intellect.