Co-authored by Bahuguna’s daughter, it is mostly hagiographic in its treatment of the central character 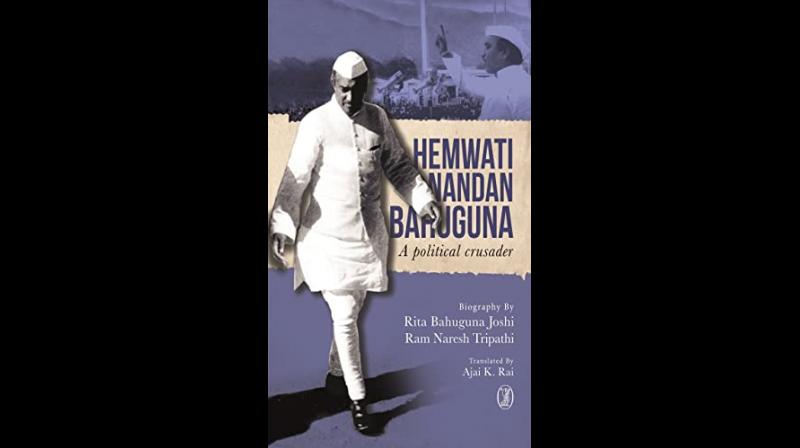 Hemwati Nandan Bahuguna was a central character in Uttar Pradesh’s turbulent politics of the 1960-70s. He also had the 3 Cs necessary to make a successful politician — charisma, competence and cunning. It is somewhat unfortunate that a book charting out his political career is coming out so late. Co-authored by Bahuguna’s daughter, it is mostly hagiographic in its treatment of the central character and conveniently leaves out the warts in his political persona.

Take the pole-vaulting which this wily politician did to remain relevant: Bahuguna quit the Congress along with Jagjiwan Ram in 1977 to form the Congress for Democracy which then merged into the Janata Party. Subsequently, he deserted the Janata Party government to join the Charan Singh government, which was propped up by the Congress. In 1979, he was back in the Congress, falling prey to Indira Gandhi’s allurement of making him the secretary general of the Congress.

But he left the party yet again, contesting the famous Garhwal by-election in 1982, vanquishing the might of the Congress. In 1984, however, he faced the biggest humiliation of his political career when he lost the Lok Sabha polls from Allahabad to Congress candidate and filmstar Amitabh Bachchan.

But that wasn’t the end of the Bahuguna story. There was talk towards the end of the 1980s of this ambitious politician building bridges with the Rajiv Gandhi-led Congress again after the party began feeling the heat of the V.P. Singh-led insurrection. But Bahuguna’s health deteriorated and the rapprochement did not materialise. This, of course, does not find a mention in the book.

While a hallmark of Bahuguna’s earlier career was his secular outlook — and there was nary a Muslim leader in UP whom he did not know by first name — later he did compromise on his beliefs by cohabiting with the Jan Sangh within the Janata Party.

As a rookie reporter in Dehradun, I saw Bahuguna in action for the first time as petroleum minister in the Morarji Desai government. He had come to attend a meeting called by the staff unions of ONGC agitating for higher scales. Before the meeting, there was much slogan-shouting, and there were frayed tempers at the venue. Bahuguna dealt with the list of demands methodically. His grasp of the subject was impressive and left the gathering silent.

The book calls Bahuguna a “political crusader” and paints him as a hero pitted against insurmountable odds.  True he had developed a reputation as a canny administrator. That is why he was made chief minister of UP by Indira to firefight the situation which developed in the state following the revolt by UP provincial armed constabulary during Kamlapati Tripathi’s tenure. To Bahuguna’s credit, he managed to turn around the political situation in the Congress Party’s favour.

But the book glosses over some of the behind-the-scenes events which took place then. One of the reasons why Bahuguna was chosen to replace Tripathi was because like the latter, he, too, was a Brahmin. Clearly, Indira Gandhi did not want to alienate the powerful lobby of Brahmins who along with Harijans and Muslims then formed the pivot of the party’s support base.  The fact that Brahmins did matter in those days is evident from the choice of Bahuguna’s replacement, N.D. Tiwari, and Tripathi’s subsequent rehabilitation as railways minister at the Centre.

Did Bahuguna’s ouster have anything to do with Indira’s growing insecurity about his popularity? The book alleges that a caucus surrounding the then PM instigated her against Bahuguna. Also, Indira was peeved with Bahuguna because he refused to politically handhold her son Sanjay, then an emerging extra-constitutional authority. But talking to Congressmen from UP and those who mattered during that era, one got the impression that Bahuguna was getting uncomfortably close to the Soviets for Indira’s liking. (Charan Singh, in fact, had later even alleged in a letter to Morarji Desai in 1979 that Bahuguna was a “KGB agent”.) Another reason could have been his efforts to build a larger-than-life image among the Muslims.

The book has been translated from Hindi into English. That’s always a tricky exercise as political writing/reportage in Hindi tends to lean on hyperbole. Unless one has an understanding of the heartland politics, it is difficult to get the nuances right. Hence, the translator, Ajai K. Rai, has done a reasonably decent job.

The reviewer is a Delhi-based journalist