A minister recounts his game of thrones

It is in times like these that one sees political veterans penning memoirs, fulfilling a vital need for the hitherto unknown. 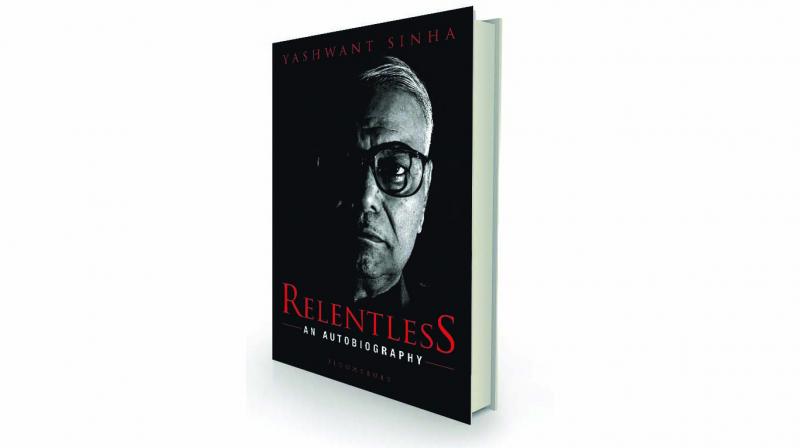 At 81, Yashwant Sinha has seen it all. He had a worm’s eye view of Indian bureaucracy for almost a quarter of a century and both a ringsider’s viewpoint as well as participant’s perspective of the hurly-burly world of politics. He was member of both Houses of Parliament besides also serving for a short period in the 1990s as Bihar state Assembly member. Sinha held crucial portfolios of finance and foreign affairs during very important periods in Indian and global politics and inhabited diverse political camps which at times made common cause and on other occasions were at one another’s throat. Like most political leaders in India, the last phase of his political voyage has been in the wilderness as the party where he spent a quarter of a century found him of little use and was left “no role in the party. I had no connection with the people in the government either”.

It is in times like these that one sees political veterans penning memoirs, fulfilling a vital need for the hitherto unknown. Insofar as Sinha, the political leader, is concerned, the interest in him is chiefly due to the following episodes or phases in his political career: The beginning — when he sought voluntary retirement from the Indian Administrative Service and joined the Janata Party; the first “real” recognition when he was appointed finance minister (with cabinet rank) by Chandra Shekhar — V.P. Singh who had been the previous Prime Minister offered him a MoS rank which Sinha turned down; his decision in 1993 to join the Bharatiya Janata Party barely months after criticising the party for its role in the demolition of the Babri Masjid; becoming finance minister once again in 1998 — an appointment which enabled him to present several budgets and join the hallowed group of Indian finance ministers to present five or more Union budgets; his tenure as foreign minister from July 2002 till 2004 when the BJP and himself were defeated in elections; the advent of Prime Minister Narendra Modi at the BJP’s helm and finally Sinha's exit from the party in 2018 after having held the placard of “rebel leader” since 2016 when he joined an unlikely citizens' group to explore political dialogue in Jammu and Kashmir.

This is not a tell-all autobiography and Sinha has been kind to most people he rubbed shoulders with. One could have expected him to shed bureaucratic reticence and be more revelatory, especially on the most contentious decisions during his tenure as Union finance minister — in 1990 as finance minister when the perilous balance of payment crisis forced India to pledge its gold reserves, a decision “I could have done without... but that would have been highly irresponsible”. Sinha may have considered including what little “revelations”, made in his 2007 book — Confessions of a Swadeshi Reformer. But certainly, not much has been missed because in his previous book, Sinha provided only a sketchy account of the process of how 20 tonnes of confiscated gold was mortgaged.

Like in the previous book, Sinha once again mentioned his being the “second choice” finance minister in 1998 or how he was asked in 1999 to be the minister once again but this time in a truncated finance ministry. But there are insights into a certain moral and political hollowness in the character of Chandra Shekhar, the man who inducted Sinha into the Janata Party. There is also a significant hint regarding the infamous Kandahar exchange personally led by Jaswant Singh in December 1999. Sinha writes that after the Cabinet Committee on Security decided to “exchange hostages for a few terrorists” the issue of Singh “going to Kandahar with terrorists to personally hand them to the Taliban” was “not discussed in the CCS; it was announced by Jaswant Singh himself as he entered the meeting room along with the Prime Minister as he generally did [sic]. Those present received it in complete silence; everyone assuming that he was doing so with the approval of the Prime Minister. But today is another day...”

Sinha also writes that his “problems with the Sangh Parivar increased when I became finance minister. In fact, senior Sangh functionaries would often approach me to help someone close to them”. On his part he tried to assist if the “work was doable but, more often than not, I had to disappoint them”. This obviously had them gunning for him.

Sinha’s severe troubles within BJP began after the 2009 elections which he won from Hazaribagh although the party plummeted to a performance worse than 1991. This was the time when pressure mounted on L.K. Advani to step aside from leadership, Nitin Gadkari became party president and more importantly, the rise of Narendra Modi. Sinha was done in by his “ambivalence” regarding the then Gujarat chief minister's emergence as prime ministerial candidate of the party, a fact that sealed his fate. Their differences dated back to 2003 when Sinha as foreign minister delayed, with valid reason, Mr Modi’s travel to the United Kingdom. It’s often said of Mr Modi that he neither forgives, not forgets. Sinha possibly learnt it the hard way.

The writer is a Delhi-based journalist and author. His latest book is RSS: Icons Of The Indian Right.