The book’s many, well-researched papers dealt with the larger issue of the state of healthcare in India 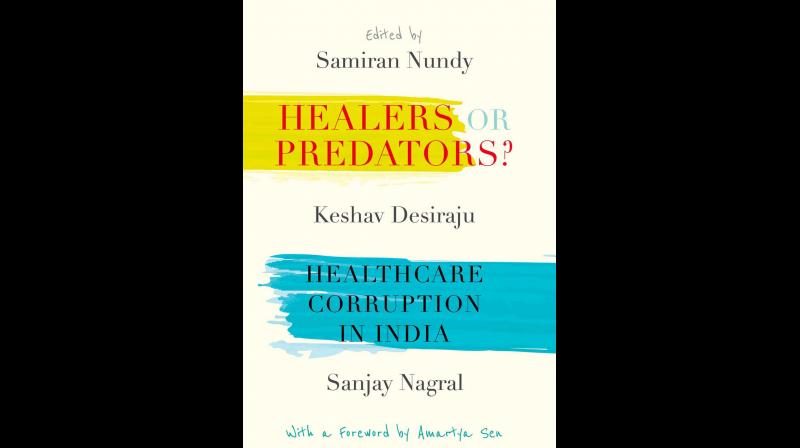 Cover page of Healers or Predators?: Healthcare Corruption in India

The coronavirus pandemic holds many lessons for India, primary among which is the need for a robust public health system. In times of crisis, the private sector healthcare industry can and surely will help but the brunt must be borne by the government sector, which operates beyond the dictates of profitability and with a freedom mandated by the fact that it is an arm of the government.

Much before the current pandemic exposed the terrible gaps in our healthcare system, one doctor had gone to great lengths to make the public aware of the serious shortcomings of Indian medical institutions, systems and practitioners.

Dr Samiran Nundy, one of the country’s leading surgeons in the field of gastroenterology and former head of the department of gastrointestinal surgery at the All India Institute of Medical Sciences (AIIMS), had painstakingly put together an encyclopaedic book on the ills of the Indian healthcare system. Although the primary focus of the book was on the corruption in the medical profession, the book’s many, well-researched papers dealt with the larger issue of the state of healthcare in India.

In his introduction, Dr Nundy had focussed on the heart of the matter, asserting that “public health must remain a public responsibility and neither the lack of financial resources, the inability to manage systems, the unwillingness to govern responsibly nor an unfamiliarity with technology should become an argument or excuse for outsourcing healthcare to private enterprise. Corruption arises precisely because of these issues but these are remedial situations.”

The root of the problem is low government spending on healthcare. “India is a poor country”, he writes, “but there is no justification for the fact that for many years now the total public expenditure on healthcare has hovered between 0.8 per cent and 1.1 per cent of the GDP. It is not that funds cannot be provided.”

Of course, as many of us know, there is money, especially when it is not being spent on populist vote catching schemes or freebies like free power and loan waivers. The several lakh crores of the taxpayers’ money which have gone to garnering votes for the next elections could well have been spent on the country’s tottering government healthcare system.

Apart from political profligacy, there are additional problems as some of the papers in the book elucidate. Authors Ritu Priya and Prachinkumar Ghodajkar in their chapter titled “The Structural Basis of Corruption in Healthcare in India”, point out some factors that have eviscerated the Indian healthcare system.

“Since the 1980s, the role of the nation state has weakened in social welfare; commercial entities have become stronger and shape state policies rather than the other way around. They, or the new institutional structures developing under their influence, operate increasingly on market principles informed by ‘new public management’ approaches, often contrary to the welfare and service orientation of healthcare”, they explain.

This is troubling because, as the authors of this paper point out, the “conventional logic of the buyer and seller in the marketplace does not apply to the health sector” since “the user often does not have the choice of not buying the services, as it can be a matter of life and death or discomfort and disablement”. This is the basic underlying problem associated with medical care.

The book is really a magnum opus on not just corruption but the plethora of ills plaguing the country’s healthcare system, including issues such as the rise of the medical-industrial complex, problems of regulation, government spending, the unholy nexus of doctors and pharmaceutical companies and much more.

There are a total of 41 chapters or papers in the book written by a diverse set of experts in their own fields. This book is for practitioners, policy makers, researchers as well as the lay reader, who now more than ever must make herself aware of the myriad and very serious problems ailing our healthcare apparatus.

Ultimately, the message, as far as the good doctor is concerned, is clear: “Governments at both centre and state levels, must continue to be the primary player in healthcare, and certainly in primary healthcare. The specious difference between providing and purchasing care must be called out. Even if government were to purchase the services, it must still provide those services to the people at little or no cost.”

In these times of crisis, the grave inadequacies of our government-run healthcare system are destined to adversely affect millions. The lessons Dr Nundy has learnt over years of medical service need to be disseminated among all thinking Indians, as well as the country’s leadership.