The book is a recollection from memory, says Hamid Ansari on his autobiography 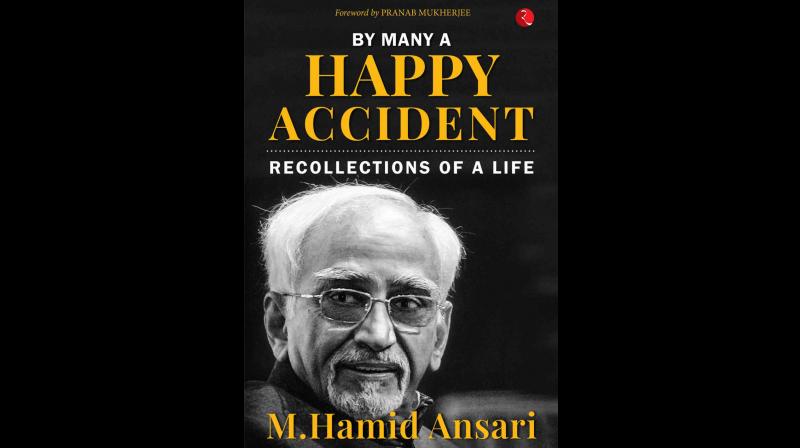 Cover page of By Many A Happy Accident by Hamid Ansari

Career diplomat Hamid Ansari, who rose to become Vice-President of India, in which capacity he served from 2007 to 2017, in a conversation with Ashhar Khan over his just-released book By Many A Happy Accident, and the many controversies surrounding it

What was the idea or inspiration behind writing your autobiography?

Well, it was nothing, actually. I was not too keen but my children and my friends said that I should write as I had a diverse life. So, one fine day, I started writing and kept on writing. I had sent it to the publisher in last March but due to Covid-19 it will be formally launched only now. The book is a recollection from memory.

You have had run-ins with the Prime Minister, Mr Narendra Modi? Could you explain?

There was no run-in. Everybody has got it wrong. I had met Mr Modi for the first time when he was the Gujarat chief minister in 2007 and he came to congratulate me on my election. I asked him a question about the post-Godhra issue. I recorded his reply. As PM he came to my room unannounced. Though meetings between the PM and the VP are not abnormal, they are rarely unannounced. He spoke about bills getting stuck and I replied that Mr Jaitley had been a witness to that during UPA times. I did not agree to pass the bills in the din. Even the UPA was not happy with that. Then Mr Modi asked about Rajya Sabha TV. I said I have no role in it and there is a committee that takes care of it. On my retirement, he said something in the morning and I replied to him, and in the evening he spoke differently. Now, why he changed his tone I do not know, but neither did I try and find out. I have normal relations with him. He has his own views and I have my own; that’s all.

You have been a diplomat in important places like Australia, the UAE, Saudi Arabia, Iran and Afghanistan. Would it be correct to say that the prestige of India has increased post 2014?

No. That is actually not correct. I have been around in the 1980s and the 1990s, mostly as an ambassador of India. The image of India was always high in political terms. India was an important country as a leader of the Non-Aligned Movement and it also played an important role in the councils of the world. Post economic reforms in 1992, India’s economic capacities were being looked at afresh. When I was Ambassador in Saudi Arabia around 1996, I noticed that India was being looked upon as a market where investments can be made. One day, two senior officers of the oil company, Aramco, came to me for seeking visas. They wanted to establish a product experimental centre in India. The other centre was in Houston. Finally, they set up the centre in Vadodara. This hugely changed the perception of political relations. Since 2000, perceptions have changed and India is viewed as a political, economical and military force.

Do you feel that, diplomatically, we have handled China well, considering all the action at the LAC?

A structure was put in place in 1993-94 and during the UPA government’s tenure, which had a two-pronged approach. One that we have to keep talking to find a solution to the boundary problem, as there existed different perceptions. This made sure that there was no active conflict or blow-up. That worked very well. We exchanged visits. A great deal of trade was taking place. The full story of Doklam or Galwan will not be known. Probably, someone will write it someday. But there was a skirmish and, in Galwan, it went out of hand. In spite of that the perception on both sides is to keep talking. Talking will yield results. I don’t think both are interested in starting a war. But, yes, something did go wrong in Galwan. Both states realise that we are big neighbours, and that cannot be wished away.

In the last couple of years, do you think that there is a concerted effort to attack minorities under the garb of legal sanction, like love jihad, anti-conversion law, etc.?

It’s all there. It is true, but my thing is that you cannot travel on that path in this country. That is my firm belief. The diversity of this country is a fact of life that you just cannot undo. Identity is a very important factor in any society. And it’s multiple identities in this case. Yes, all that you asked in your question is true as a political agenda that is being spread in a crass manner. It may trouble people for the time being, but it just cannot go on.

One of the predominant themes in your book is equality before law, justice. Do you think this is happening in present-day India?

Yes, I see everything. The simple thing is, one should read the copy of the preamble. One should read it. It says equality, justice and fraternity. I have hinted in my book that we should take lessons from the experiences of other diverse societies in our own times. Accommodation and fraternity is very important for the well-being of the country, and the foundation of this country is based on this.

Do you think governments that have brute majorities use Parliament as a post office?

That is very unfortunate thing because the system of government of a parliamentary democracy rests on four pillars, and the Parliament or legislature is one of them. The Parliament has to do its work. Thirty years ago, the House would meet for 100 days, and now it is barely 60 days. This means, the Parliament is not doing enough work. The question is why this should be allowed. It is within the rights of members to say that they want more sittings. But they just want to sign on the attendance register and leave. State legislatures are even worse. The Standing Committee is a very good system as all parties are represented. The money bill technique of passing laws is also an aberration, which has been tried in the recent past.