An intrepid Bengali teacher and his time in Tibet

The problem was that Tibet had closed its borders to all foreigners and the only people allowed in were Buddhist monks. 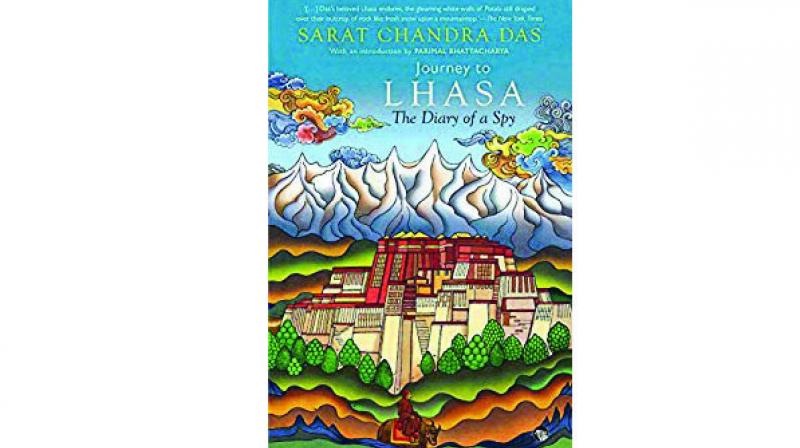 The 19th century was the age of the great game, played out with British India at the centre and the rival powers of Russia and China at the peripheries. The British, careful to guard their precious Indian empire from any possible threat, regularly monitored the neighbouring regions. Soon Tibet too became an area of concern and to know more about this forbidding, jealously guarded land, British officials in Calcutta recruited Indians willing to risk the arduous journey there.

The problem was that Tibet had closed its borders to all foreigners and the only people allowed in were Buddhist monks. “The British began to exploit this chink”, writes Parimal Bhattacharya in the book’s introduction. “They sent spies into Tibet disguised as Buddhist monks in secret and dangerous missions. These spies were called Pundits.”

Sarat Chandra Das, an English educated school teacher based in Darjeeling, was among the handful of “Indian Pundits” recruited and sent into Tibet. Not only was he a trained civil engineer but also a Tibetan scholar with a consuming interest in Buddhism. He was a natural choice for such a mission and was sent in twice — first in 1879 for four months and then in 1881 for somewhat over a year. His second, more extended visit, forms the basis of the book.

One problem with this travelogue is that the author has not deemed it necessary to provide a larger topographical account of his travels. He plunges straight ahead from his point of origin (Darjeeling) to the Tashilhunpo Monastery in Tibet and finally to Lhasa. To a lay reader unfamiliar with the geography of the region, the places, valleys, rivers, mountain passes and so on mentioned would remain a mere succession of foreign-sounding names. But the author was not interested in doing so. He was writing a meticulous report for his masters who were more interested in the details than in the broad picture. However, one would have assumed he would mention the distances travelled between each point in the form of a route map. But this too is absent.

One has to refer to maps to realise the extent of the author’s remarkable journey from the mountains of Darjeeling in north Bengal, across the Valleys and passes of Sikkim along the western side of the Kanchenjunga range before finally entering Tibet through the Kangla Chen pass in eastern Nepal. The author travelled roughly north till the Tibet border and then turned northeast towards the monastery at Tashilhunpo.

This monastery, unfamiliar to most in India, is the seat of the Panchen Lama and located at Tibet’s second largest city, Shigatse. The author has visited this place earlier and knew several important people there. These connections were used to obtain permission to his further excursions to Lhasa, the capital of Tibet. Some of his detailed descriptions of the monastery are remarkable:

“In the evening the monks of Tashilhunpo busied themselves illuminating their chapels. Hundreds of butter-lamps were tastefully placed in rows on the roof of every building in the lamasery. The Government supplies butter to every house in the town and to every resident monk, to enable them to contribute towards the illumination. From the roof of my house I saw the illuminations to great advantage. The fantastic roofs of the four tombs (gyophig) of the Tashi lamas were beautifully lit up. The mitre-shaped spires, the upturned eaves of the temple looked most gorgeous, and resembled the illuminated tajiahs in a Mohurum procession in India. The great monastery of Tashilhunpo, situated as it is at the foot of a hill, presented a magnificent appearance. For an hour the illumination was beautiful, but towards 7.30 o’clock the wind began to blow a gale, and had soon extinguished all the lights and driven me into my house shivering with cold.”

One significant part of the author’s account of Tashilhunpo and the Shigatse town, is the Tibetans’ relations with their overbearing Chinese superiors. He recounts an incident where the Amban or Chinese high official misuses his position to extract travel money from local Tibetans and when the people protest, “the Chinese soldiery, by various oppressive means, tried to squeeze out of them.”  This further infuriated the locals who rioted. Instead of punishing the Chinese official responsible for the trouble, the Tibetan authorities punished the local officials (Djongpon) by demoting them and decreed “furthermore, each of them should receive 200 blows with the bamboo”. This incident illustrates the power of the Chinese emperor over Tibet and how oppressive suzerainty to Beijing had always proved to be. “The punishment of the Djongpon had filled the people with fear of the Chinese”, writes Das. “They apprehended new insults at the hands of the Chinese swaggering about the streets of Shigatse. People who had come to the market from a distance to sell their goods were packing them up to hurry off home. No provisions could be had, no purchases could be made.”

From Tashilhunpo, the author went on to Lhasa where he saw the amazing Potala Palace and met the then Dalai Lama who was only a child of eight at that time.  The author presented the Grand Lama with a tola of gold and a scarf. He and others given audience were made to drink tea and eat rice consecrated by the child Lama.

In Lhasa, Das discovered that the “Amban, or Imperial Resident of China in Tibet, is the head of the Tibetan Army” and has virtually become political master of Tibet. “The political relations between Tibet and China are now so intimate that the Imperial residency established at Lhasa in the first quarter of the last century has converted Tibet from a protected state into a dependency of China,” the author observes, adding that the “Ambans are the terror of the Tibetans, who abhor them from the depth of hearts.”

These and numerous other observations formed the basis of a fascinating report on the inner workings of Tibet. The trek from Darjeeling to Lhasa and back spanned over an year. Reading the book, one can only express admiration for the sheer grit, physical endurance and courage of Sarat Chandra Das, the intrepid 19th century Bengali schoolteacher. His journey remains a magnificent example of the indomitable spirit of explorers of a previous age.