The opening pages of the book argue that India was always rich. Certainly it was 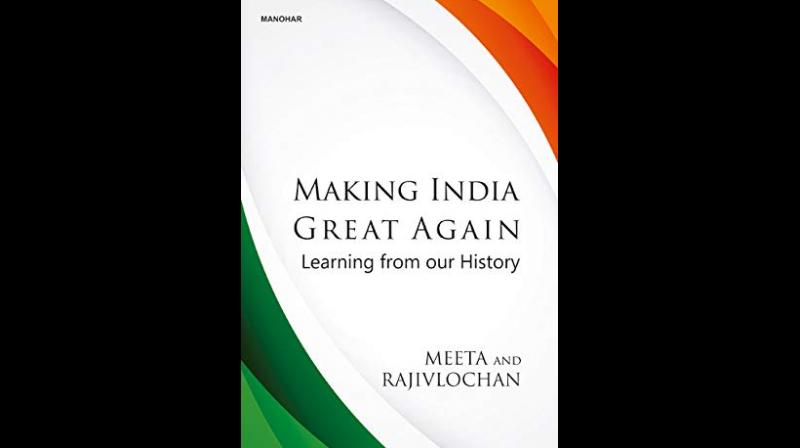 Making India Great Again: Learning from Our History By Meeta and Rajivlochan. (Amazon)

This book, according to the authors, arose out of probing questions from students about the causes of present-day India’s poverty, and what can be done about it, especially since India is rich in resources and knowledge. The opening pages of the book argue that India was always rich. Certainly it was. Why else, indeed, would so many others invade India? But even after all those invasions, at the time of the arrival of the East India Company, India was well off. The data presented show some indicators of the quality of life of “ordinary” people in some parts of the country. A set of observations, for instance, of the diet of a peasant family of six in Bengal in the early 18th century, and the life of a Marwari family in the late seventeenth century, show that the average person had a reasonable quality of life by the standards of the day. This was the period just before or about the arrival of the East India Company on Indian shores, and several visiting diarists remarked that common people in India were at least as well off as people almost anywhere else, if not better off. Its merchants were rich and knowledgeable, its rulers effective and powerful, and artisans skilled and productive.

How, then, did the East India Company establish itself as a power in the land? The lesson from history is this: legal, fiscal, and financial mismanagement. Essentially, the State and merchants didn’t share information, responsibilities, and duties clearly or evenly. This hampered risk-taking ability, caused uneven infrastructure, and created opportunities for officials to feather their nests. For example, soldiers of Indian kings were paid irregularly and, therefore, not committed to the protection of subjects, with consequent risks to shipping. The Company had a unified, leadership capable of sharing and using information to its best advantage, while large parts of Mughal officialdom and even merchants operated more or less on their own.

Indeed, trade in India depended on trust and honour instead of enforceable laws based on written contracts. Absent, incomplete or inconsistent financial records meant that trade processes couldn’t proceed smoothly or profitably, and couldn’t expand as fast. Indian rulers were lackadaisical in matters of collecting taxes and customs duties, and the East India Company evaded duties successfully to the extent that disputes over these evaded duties led to the Battle of Plassey, after which the Company entrenched itself and exploited the natives on a larger scale than before. Tax collection was at best patchy, as can be seen from the available records showing the Mughal jama, taxes that could be collected, versus the haasil, or actual collections.

The victory of the Company over the Nawab of Bengal in the Battle of Plassey marked the beginning of the end of India’s wealth. The Company used its information base and systems to exploit the populace — witness the terrible famines in Bengal of the time— while the rulers stood by. The pity is that people did know that having a government and business working in concert and sharing information was a definite advantage. There’s a long anecdote – a whole chapter — about the banking house of Jagat Seth, which flourished, thanks to the relationship between one Manickchand and Nawab Murshid Quli Khan of Bengal. They failed to institutionalise the relationship so that it could continue beyond their lives. Though this does smack of crony capitalism (why not all bankers in Bengal?), the lessons are clear: business cannot operate in the long term unless it works with government.

The book also notes, among other things, the change in India’s population from the time of the Mughals to the year of Independence: the country’s population is thought to have doubled during the period to about 350 million. In the Mughal era, zamindars treated their workers well, simply because there were less people available for work. The growth of the population changed all that. What the book doesn’t acknowledge fully is the effect of the depredations of the British Empire. Estimates of the value of what the British took away are in the trillions of dollars: Shashi Tharoor, in a speech to the British Parliament, speaks of $15 trillion.

Instead, it talks of the competence and knowledge of Indian artisans. Again, there’s a whole chapter on a kind of steel called Wootz, which eventually grew too expensive to manufacture. Some ways of making different kinds of steel are described in the sixth century Brihat Samhita. You could make a sword that wouldn’t break against rock, for instance, or blunt itself against iron instruments. There was even the use of what has been found to be a kind of nanotechnology in metal-making, though the ancients didn’t use such modes of thought. There’s no mention, though, of the Asoka Pillar, which is older by far than the Brihat Samhita.

There’s more on construction, and the sophisticated geometry, for instance, of temples. Artisans of the day had simple tools, but could use those to create remarkably intricate and strong structures, mostly of stone, and these can be seen all over the country. There’s even a mention of surgery in the eighteenth century — specifically a procedure now called a rhinoplasty, reshaping or reconstructing the nose — being done long before the like was possible in the West.

And so to modern India, where the last decade of the twentieth century saw the economy opening up. The link between information and productivity continues weak despite the mounting evidence that information systems must be strengthened, and that information is the mainstay of all aspects of modern living, industry, agriculture, trade and services, and what-have-you. Here is what is required: a working legal system that delivers justice reasonably quickly; information systems oriented towards increasing productivity rather than controlling or regulating lives; a proper understanding that information aids governance and business; and, most important, the creation of systems that enable learning to learn for the future.

But the solutions presented fail to address issues that are now built into the system.

First, how do we get past the vested interests – corruption and petty self-interest – that affect our systems of governance just as they affected the Mughals?

Second, how do we come to grips with the active destruction of Indian systems of thought by the British, particularly Lord Macaulay, and, afterwards, the trend in successive Indian governments towards ignoring these systems?

Third, and perhaps most important, there is no formal evidence that the information infrastructure that the authors propose is likely to work. There are anecdotes, such as the story of Manickchand or descriptions of steel making, but there isn’t rigorous evidence to support the thesis. And plenty of available anecdotes indicate otherwise: note, for instance, the development of Kerala, which has among the best social indicators and per capita incomes among the states in the country, but is among the least business-friendly states as well.

Regardless of its weaknesses, though, it does present some interesting facets of life in India before, during, and after the British. Its hypothesis on transparency, cooperation, and infrastructure for information is intuitively appealing, and technologies such as blockchain make it easier to implement. The anecdotes, although far from comprehensive, do offer insights, and would be useful reading material for students of business, public administration, and political science.