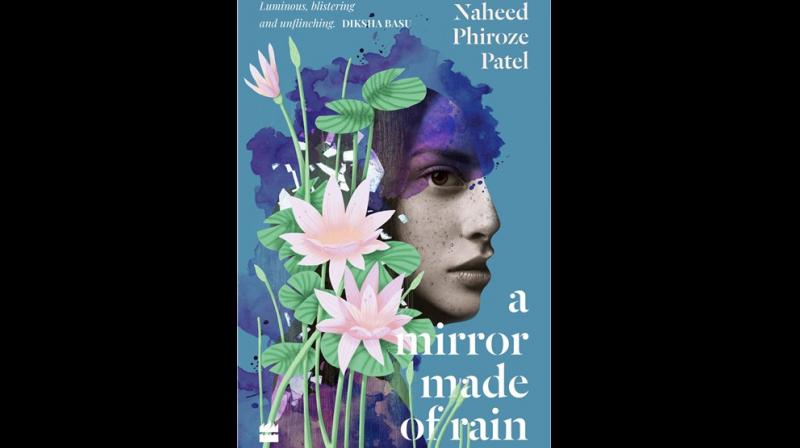 Cover image of a mirror made of rain

The cover of “a mirror made of rain” written by Naheed Phiroze Patel does full justice to the theme, plot, as well as the protagonist. The main character Noomi Wadia is a sharp-tongued, quick-tempered, bright Parsi woman, with an air of no nonsense that she carries around her like a halo. At times I wanted to shake this rebel with a cause and ask her to behave herself.

The story starts with Noomi attending one of Kamalpur’s high society parties, hosted by the hoity-toity Sheila Sehgal, who ends up becoming Noomi’s nemesis, due to her inability to stay out of trouble. In this case making out with Sid, Sheila’s engaged son, in his bedroom, while his family and fiancé are partying below. Sid and Noomi had a history which after a couple of drinks repeated itself.

Her mother Asha was left home so that her drunken stupor wears off. Living above her paternal grandparents: Zal papa and Lily mama’s house, Noomi constantly rebels against Zal papa’s controlling nature; the man who holds the purse strings also loves to dole out diktats for the rest of the family to follow.

Much of Noomi’s childhood is spent devoid of her mother’s love, who succumbs to frequent bouts of drinking binges, later making a spectacle of herself. Noomi’s teenage years are spent in playing the sex kitten with boys known to her family circle, losing her best friend because of one such indiscretion with her friend’s brother. Luckily, she and her bestie patch up several years later; age and wisdom brings the friends back together.

Noomi is frequently claustrophobic, unable to tolerate her mother’s behaviour or her father’s calm acceptance of his wife’s fondness for alcohol and his own father’s over-bearing nature. One day Noomi leaves Kamalpur for Mumbai, where she bumps into Veer outside an ATM.

Noomi and Veer end up together. When Noomi meets Veer’s parents the Malhotras, Parul, his mother with a fetish for following customs and rituals, and his father, the pompous Ajay, a high-ranking bureaucrat in the Indian government, the reader is in for some comic relief, as these scenes are tinged with a gentle irony and dollops of humour.

Though Noomi finds the love of her life, happiness is missing in action. Sadly, her mother’s pattern repeats itself, rearing its ugly head in Noomi’s life. The story moves along without much bumps and jostles, told in the first person point of view, with clever flashbacks that neither weigh the story down, nor make it tedious.

Some phrases made me sigh, like “a lake is a mirror made of rain”, while the descriptions made me chuckle. Zal papa fond of his daily two double-pegs, until a stroke in his fifties leaves one side of his face looking like Drooping Dog’s. Now he entertained himself with his annoying habit of minding everyone’s business but his own.

Noomi constantly struggles with her fragile relationship with her mother; while she fervently hopes that she doesn’t go down her mother’s self-destructive path, sadly, she not just walks the same path, but also embraces it wholeheartedly. What works in Noomi’s favour is her determination to break free from that cycle.

Patel’s characters remind one of their extended family with their bickering and resentment. Under her deft pen the ensemble cast comes alive and their interaction entertaining, making the reader constantly turn the pages. Patel doesn’t caricature alcoholic addicts; instead she treats addiction with a pen dipped in sympathy. Those scenes don’t go over the top and that works to the story’s advantage, as the reader’s heart goes out to the mother-daughter duo.The mirror is not just a something to see one’s reflection in, it’s also symbolic of looking deep into one’s soul. Do read this mirror.

A Mirror Made of Rain
By Naheed Phiroze Patel
HarperCollins India, pp. 296, Rs.499

Tags: book review, a mirror made of rain