How bots are making life easier for mankind

The fatal flaw in such speculation is the assumption that there is a defined Platonic best in everything. 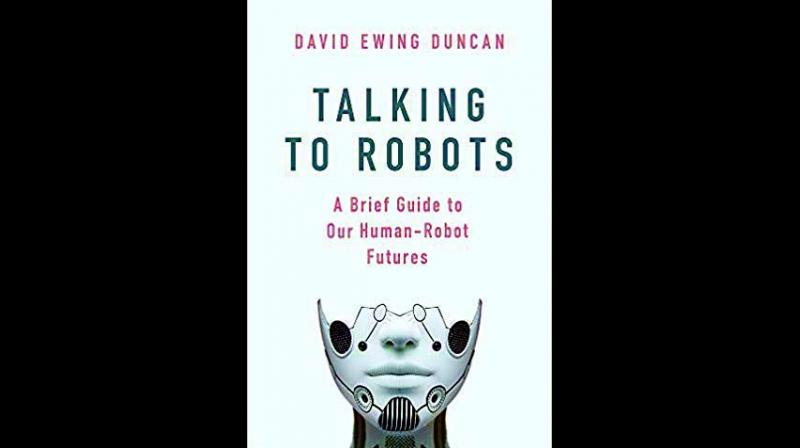 This book, as the author writes in his introduction, is “a brief guide to possible future scenarios about robots, real and imaginary. Mostly it’s told by an unnamed narrator from the future who seems to know all about robots and AI”.

Each chapter in the book is an essay on the “bots” or robots that are likely to be developed in the future. They are written as if the bots they deal with have already evolved and are part of our lives. Some of it is real and a lot purely imaginary. The setting is entirely in some distant future.

Several good things will happen in the future, the author predicts, when we have a world of robot physicians who rarely misdiagnose, robot taxis, robot teddy bears for children, robot warriors and what not. In India, although the author does not mention it, there would in all probabilities be robot maids, cooks and ayahs.

Given the daily traffic situation most of us face in Indian cities, it is heartening to find out that there would be utterly safe driver-less cars in the future —in fact companies would not manufacture vehicles driven by humans. Perhaps these futuristic cars also would follow traffic rules and not jump red lights. What a wonderful world!

There would also be politician bots, journalism bots, thriller bots, risk free bots and bots that would dig up your forgotten memories. Finally, man would build the immortal bot where man’s brain or consciousness would reside.

The world of robots will not be entirely sci-fi or set in ethereal realms. Some of it will have to do with our traditional needs such as beer. “One thing that hasn't changed in the future is our love of beer”, the author writes. One would also assume, “you will drink it the way nature intended, without a robot of any kind…”

But alas here too, the author predicts robots will step in — in fact they already have. According to him, robots moved into our breweries in 2017 when “scientists in Australia created the first-ever beer bot. They called it RoboBEER, and used LEGO pieces to build it (not kidding), creating an automated system that not only poured your beer for you but also analysed it using fifteen attributes known to correlate with a fabulous beer experience”.

Damn! I thought they would keep off that one. If beer bots are going to tell me what is a fabulous beer experience, I would rather not have it. That kind of future would be rather boring.

But the author believes there is an inevitability to it. Australians are already using RoboBEER. In the future, the author writes, “No one would dare to drink a beer without their trusty RoboBEER bot. How else would we know — after a long day of dealing with bots driving and flying us hither and yon; bots replacing our jobs; and bots that remind us to breathe during sex — which beer will give us that perfect foam that tickles our upper lip and tastes just perfect going down?”

At times, the foray into the world of pure speculation can get a little tiresome. For what after all is perfection? When the realms of the utilitarian and the emotional and sensual get blurred, life could lose much of its meaning. And that is where the author’s vision of the future perhaps fails.

For instance, when it comes to sex, the author claims there will be a future where “no one has sex without their intimacy bot from Aphrodite Inc”. These are “holograms projected from small boxes that you carry in your pocket and plop onto a bedside table or desk, or onto the floor, or wherever you find yourself having sex or discussing relationships with your lover (human or robot)”.

The author contends that sex or intimacy bots derives from our tendency to “devise visual aids, tools and devices to use for sexual stimulation. Some humans even invented gods to help them better understand love, relationships, and sex”.

The fatal flaw in such speculation is the assumption that there is a defined Platonic best in everything — from morality to sex. From this assumption arises attempts to produce the “best” experience. But is such a thing possible or even desirable? The thought of a “best” human being should send shivers down our spines — remember Hitler’s dream of breeding the perfect Aryan, blonde, handsome, strong and obedient?

The book’s basic presumptuousness makes it a tedious read in most parts. Where it excels is in informing us about the advances that have and are taking place in the utilitarian space. How bots are indeed making life easier and could be more so in the future.

This book makes it amply clear that robotics is already integral to our lives and is destined to become more so. It makes for an interesting read, detailing as it does the influence of robotics on various aspects of our life and times. Worth a read to stay informed.

Book Review | Why the ‘hardest’ journalism is exactly what matters most