Comey narrates the story of his entire life as a principled fight against bullies, without sounding preachy or unreal. 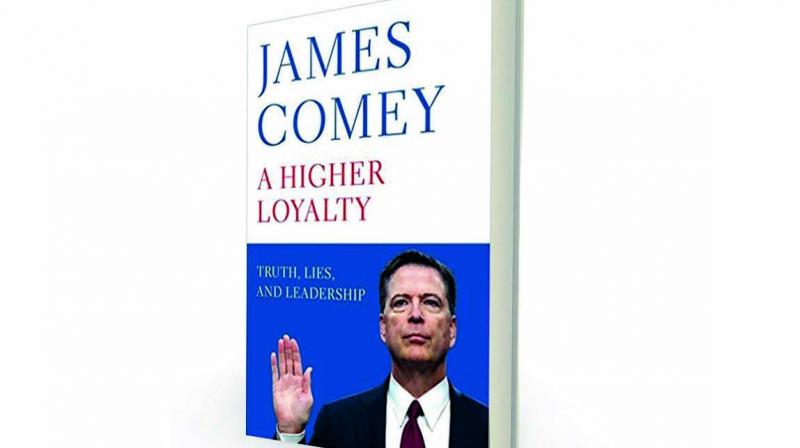 In his hard-hitting memoir, A HIgher Loyalty, James Comey, controversial official of the justice department and director of the Federal Bureau of Investigation (FBI), with a self-confessed Republican slant, ironically hired by Democratic President Barack Obama, and fired by Donald Trump whom he is accused of having helped get elected with his “timely” investigation of Hillary Clinton’s email leak scandal, makes a convincing case against Trump as an unethical leader, moulded like a mafia warlord and most certainly unfit to lead America.

Purpose found early
Comey narrates the story of his entire life as a principled fight against bullies, without sounding preachy or unreal. Starting from school, through college and law-school, to working as a junior prosecutor in New York and rising in the ranks, making it to the department of justice in Washington as the deputy head and then the FBI as its chief, his experiences against the mafia and celebrities, whom he fought equally hard, find integration to one life-theme.

Standing 6’8’’ tall, stately, dignified, with a long career in justice department prosecuting criminals and several high-profile cases, having worked with three American Presidents, “Jim–the FBI giraffe” tells a convincing story of his life shaped by purpose and strengthened by adversity from a young age, without hiding his ambitious ego-centric streak, or his love for media and attention.

Once, when his mother gave him a punishment, he wrote a note to her accepting his mistake, promising to become a great man. His mother taught him not to give up morality to join the crowd, or seek safety in letting the mob decide for him. The book show great success in living up to both the promises.

He worked at a retail store where he found an “ideal example of ethical leadership” early. His first boss at a part-time job was an extremely fair-minded man named Harry Howell who mentored the rookie in everyday work of filling cartons of milk or labelling prices on every product in the non-tech era.

Near-death experience shapes values
It was a near-death incident when a fugitive, nicknamed Ramsey, the rapist, held a gun to his head, that made Comey reject the option of becoming a doctor and take interest in fighting crime to protect people. His brief life flashed through his mind, sure as he was that would die.

Later, after being rescued by a brave neighbour and cops, he thought to himself  the only things that would matter at the end of life was impact made on other people’s lives,the evil people stopped, the good people saved and empowered. That would be his primal value.

He made his bones in the office of Rudi Giuliani as a prosecutor. Going after the mafia, breaking down criminals who killed without remorse to break away from medieval oaths of loyalty to boss, Comey promised himself to be bipartisan, hold the dignity and reputation of the offices he would hold high.

He stresses on why he values the trust American people have in DoJ or FBI, built by generations of men and women of honour with diligence and commitment, and yet, he realises, it takes the irresponsibility or corruption of very few to squander public trust.

American tribalism
American tribalism tends to scrutinise every public or policy decision as either Republican or Democratic. He refused to wear red or blue ties to showcase he stood for justice, independent of politics.

Comey shines in small cases where away from media glare, his focus was on his ideas of patriotism and institutional bipartisanship despite individual political inclinations and taking difficult decisions. He is accused of “going after fame” in the Martha Stewart case, for being motivated by jealousy of her fame as a rich star when her crime was to try and steal (insider trading through a shared stock broker) a “petty” sum of $50,000.

From the New York attorney’s office, he moved slowly but surely, when President George Bush Jr appointed him as deputy attorney general, and years later, President Obama, gave him a 10-year-termed office of director, FBI, only to be fired six years before his tenure was over by President Trump, who he was accused of helping “get elected” by going after Hillary Clinton.

In many famous cases, including the case of legality of torture in cases of terror suspicion, to privacy versus encryption by tech majors like Google and Apple, Comey places facts reasonably, argues his views, accepts that he could go wrong, and still takes a decision matching the expectation of people in his office.

Bush, Obama and Trump
Confessing most people in FBI “lean Republican”, including possibly himself, he objectively showcases the class and dignity Obama brought to office through small anecdotes of dilemma, conversations, the ability of laugh at himself, and the people the Democrat President brought to White Office. Bush laughed at other people, Obama laughed with others and Trump never, he notes.

He showcases the leaders’ strengths through their insecurities, the kind of people they hired, the small things they said, and did, — Bush was a powerful leader with limitations, Obama was extraordinary and Trump a total misfit.

I am forced to think of our own leaders, their sense of humour, wondering how many officials would stand up to those in power and speak the truth to authority or oppose illegal decisions, without fearing  loss of job.

Human, and humane
Comey fuses big issues with small personal moments. Like the death of his infant son, Collins, and how he and his wife responded to the tragedy, preparing their two grown up daughters to bid farewell to their little brother before unplugging the ventilator. Comey takes us beautifully through the pain, a case of medical negligence, and their combined resolve to help ensure others don’t have to go through such needless pain.

Russian entangle
His take on the Hillary Clinton email investigation with insight into actions publicly well known, the inner conflicts and why he choose to do what he did is fairly convincing.

Does Putin have videos of Trump engaged with prostitutes in Moscow as a leverage? Does Comey have a grudge against the Clintons because of his various run-ins with them? Did Comey actually influence a highly divided nation, at the peak of election fury, away from the first women President? Comey engages with every question and puts his viewpoint successfully, unveiling the story like a thriller.

And then, like for the world, for Comey too, Trump happened. Comey accused Trump of using techniques similar to mafia warlords who seek “personal loyalty”, oblivious to notions of institutional independence or personal integrity. Comey resists, and pays the price. He was informed, while giving a lecture on his pet project of diversifying talent at Quantico, that he had been fired by a TV headline.

He gives insight into the FBI’s work into Russian interference in the US elections. He explains how foreign interference works. He reveals, with responsible caution, how the FBI was dealing with Trump.

There is little doubt that Republican Comey, with deep insights despite few personal interactions, is convinced Trump has no sense of ethical leadership and is unfit to rule America, or the free world.

Indian context
I could not help taking forced breaks from James Comey’s memoirs to reflect and find parallels in Indian political context of an equivalent official who used his office and station with great sense of purpose, a commitment to higher loyalty and standing for a single motto during an entire lifetime’s work — to protecting people and upholding the Constitution, and challenging authority when it becomes unethical, tyrannical, unjust or illegal.

Surely, there have been those who have served with a diligent sense of duty, fought for justice against the powerful without fear for job, or life, but I can’t recall reading many memoirs. T.N. Seshan, G.R. Khairnar, Vinod Rai, Ashok Khemka or V.V. Laxminarayana are just top name recalls. Rai’s Not Just an Accountant is the only book I have read. Some are still serving, some have not chosen to write a memoir, and of many others, we possibly just don’t know about.

Taken in our context, it is terrifying to think that Pakistan, or China, could choose to spend a few hundred crores of rupees to try to sabotage Indian elections.

It is frightening to think who are the “people, just like us”, in whose hands the affairs of the nation are wrested, and who may or may not, like Comey, choose to respond to a higher loyalty of protecting people and upholding the Constitution.

A Higher Loyalty is a great memoir, a terrific read which leaves the reader outside America with the hope that there are more Comeys in every government across the world, especially his own nation.

Sriram Karri is the author of the bestselling MAN Asian Literary prize longlisted novel, Autobiography of a Mad Nation, and the  non-fiction, The Spiritual Supermarket.