The story starts with a thief breaking into the British museum to steal the Cyrus Cylinder, a relic of Cyrus the Great who ruled Persia 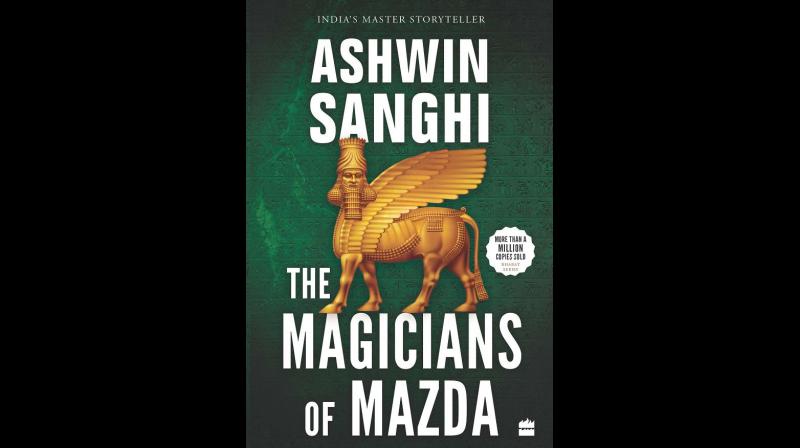 Cover page of The Magicians of Mazda By Ashwin Sanghi. (Photo By Arrangement)

The size of Ashwin Sanghi's book The Magicians of Mazda may end up scaring a new reader. But for fans of Sanghi’s thrillers as well as book lovers, it’s a welcome sight.

The story starts with a thief breaking into the British museum to steal the Cyrus Cylinder, a relic of Cyrus the Great who ruled Persia 2,600 years ago. The man kills the guard who tries to stop him. That sets the tone of the novel, that people will kill to get what they want.

Cut to the next few scenes, Jim Dastoor, an Indian born Parsi scientist and his historian wife Linda are living a peaceful life in Seattle. Jim is on the verge of a major breakthrough in his research. Through a video call from his laboratory, he communicates to the four researchers who work with him, that his formulation called Hamzaa Dura can replace virtually every other medicine in the world. It’s a medicine that can trigger the regeneration process in humans and it can be the mother of all cures.

So, if it’s that good, needless to say there will be pharma companies too clamouring for it. Jim is first abducted by the pharma giant Asclepius and taken to their facility as they want the medicine. From there he is again abducted and taken to Tehran, as the supreme leader of Iran believes that Jim will lead them to the ancient relic called the Athravan Star which he believes was taken by the Parsis when they fled to India from Persia. In Tehran, Jim is imprisoned in the coffin cell (a torture unimaginable) to break his spirit.

Jim's wife Linda and his close friend and co-researcher Dan Cohen,take the help of a motley group of people and follow him to Tehran to rescue him. The trio with a couple of other people then reach Afganistan, smack into the waiting arms of the Taliban. Practically everyone around Jim, who is either abducting him or rescuing him, has a secret agenda of their own. Friends turn into enemies and betray himand enemies offer to help;all this happens in the blink of an eye. The three constantly jump from the frying pan into the fire and then back into the frying pan, this becomes a loop with the reader eagerly turning the pages of the book to know whether they will meet a friend or a foe next.

The entire story is linked to the exodus of the Parsis from Persia. Through the story you will see the ancient ruins of Persepolis, hear about the fire temple of Udvada, visit the Tower of Silence of Dui and also a library in Navsari (a city linked to the history of Parsis in India) with an octogenarian Pestonji Unwalla and see the valleys and lakes of Kashmir with a baba. Then you will also bump into China's spy agency, move along with a razor-sharp mossad spy and shake hands with an NSA agent. The roads of Kish Island and Taliban camps and deserts come alive during the escape scenes.

The Magicians of Mazda is a lesson in Zoroastrian history, in ancient myths that have been shrouded by time. Though this is a work of fantasy, Sanghi’s research is phenomenal, his characterisation happens on a large scale, the characters are so life-like (even the deadly commandos) that you can’t help but like them.
Sanghi's story is like a giant jigsaw puzzle and, chapter by chapter, he makes the characters assemble it as the reader gets to learn what is this Athravan Star, how it is connected to Jim, what is in the wooden box passed down from ancient time and how Jim is its current custodian.

At times Sanghi’s narrative may overwhelm the reader, especially with the mention of so many ancient kings and the battles they won/lost, but he always manages to wrest the story back to Jim and back on track, so that the deviations will make the readers think that they just took a detour to get acquainted with ancient history.

Though Jim is the main character, but for me Linda completely stole the thunder from him. But that fact in no way dilutes Jim's character. Infact it balances his story, as the man of science is married to a historian, so the reader getsboth facts and myths and both are tied up together so neatly. For that the credit goes to Sanghi.

As for the reader, this roller coaster ride that encompasses the geography of the world is both racy and intriguing. Whoever said that history was boring hasn't read Sanghi yet. Under his pen history takes on a new persona and comes alive.