Book Excerpt | Some seek song, others salvation, still others wealth at Kumbh 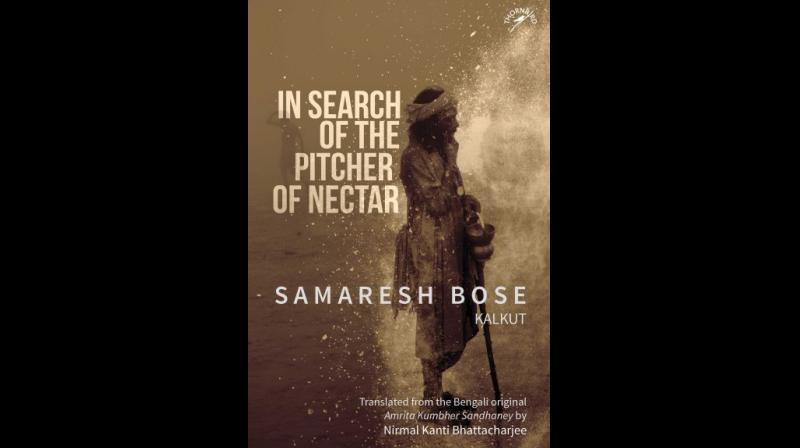 Cover page of In Search of the Pitcher of Nectar By Samaresh Basu. (Photo By Arrangement)

Babuji, on hearing this song, Rukmini came out fearlessly and worshipped Raghunandan by offering water, flower and sandalwood paste at his feet. Everyone was stupefied. More conservative sanyasins of the akhra were angry. The Mohanta said, we have to inform the members of our other ashrams—Nirbani, Niranjani, Atal, Ananda and others. We would take appropriate action after consulting all of them.

"But it was no longer necessary. Raghu absconded that night…
"Rukmini was distraught, but calm. Two months passed away in this tension. Then suddenly, Rukmini’s husband visited the ashram along with a group of people, some of them armed. They had come to take Rukmini away. Their charge against the ashram authorities was that she had been detained there by force. It was a huge scandal. The reputation of the ashram was at stake…

"Babuji, I would not lie to you. Rukmini’s departure pained me. And why should it not? After all, Rukmini was the leela-consort of my beloved Raghu. In the path of sadhana, a consort was only a spiritual process… But in the case of Raghunandan, Rukmini had acted as a key to open the door between his heart and knowledge…"

Mahavir got up to go. I pleaded with him, "Before leaving, please tell me what happened to Rukmini?"

He replied, "I can’t say what exactly happened to her. But within a year, we heard that she had become the glamourous Muniabai of Lucknow."
I asked, "How did that happen?"

He said, "I won’t know. What I heard was that her husband was a timid person. He could not save her. On the way, the very ruffians who had accompanied him, took her to a hidden place and gang-raped her for days.

"Finally, Rukmini escaped from the clutches of the goons. She did not go to the police or seek anybody’s help. I don’t know who helped her to the world of the courtesans in Lucknow. But soon, her reputation as a captivating beauty grew.

"But suddenly, she left everything in the prime of her glory and re-emerged in the new avatar of Ramjidasi… She is now the talk of the entire Uttar Pradesh. Even the sanyasins in the akhras discuss her. Today, you saw her with your own eyes. She is still the dazzling flame. I don’t know what pralay, catastrophe, will happen again around her. As far as I hear, she is now always in an ecstasy of naam-kirtan. People say she met Raghunandan in Lucknow. After that, she has undertaken this journey…"

Mahavir stopped. I implored him to go ahead. He continued, "It may be a rumour. The person who was playing the sarod is believed to be totally devoted to her. He was an ordinary clerk in Lucknow. It is said that every evening, he volunteered to play sarod with Muniabai’s dance. Now, he is her constant companion. He does not talk much. Not even with Ramjidasi. But the tune of his sarod speaks. Without the tune of his sarod, Ramjidasi’s feet do not find the right step to dance, nor the right voice to sing."…

Mahavir folded his palms on his forehead and took leave by saying, "Namastey, Babuji," then rapidly walked away towards the eastern side of the Kumbh-mela… I found a lot of people still roaming around. It was quite cold by then. Everyone was moving towards his or her respective tent. The moon had climbed almost up to the mid-sky.

Suddenly, I was jolted back to attention by the sound of the lashing of a whip. A tonga was entering the sand-bed. Its wheels were digging into the sand… [I] was about to turn back when someone came and stood in front of me. He bared his large teeth in the semblance of a smile and stared at me with his big round eyes. Before I could ask anything, he enquired in a hushed but excited tone, "Have you got something?"

I was totally flummoxed. The man spoke in chaste Hindi. His whole body was covered in an expensive shawl. It was impossible to guess his age, but there was a conspiratorial look on his face. I was sure he had mistaken me to be someone else.

Totally unfazed, the man replied, "Why, haven’t you been talking to the sadhuji for the last two hours? And that too in a low tone. I’ve noticed everything. Maharaj, you are lucky. Not everyone gets such a break. But please tell me, thodabahut."
I did not know whether to laugh or cry. How full of surprises was this congregation of lakhs of people! "What do you think I might have got?"

The man laughed with his head bent on one side and said, "My God, if I knew that, I would not be standing here. Brother, I’ve turned my hair grey by observing all this. You cannot hoodwink me."

What a blackguard! I started walking. He also walked side by side. After a while, he asked, "Have you seen the huge precious stone shop on the bank, just at the entrance of the mela?"
I said, "No, I didn’t."

He laughed intriguingly with dancing eyebrows and said, "Then you have missed a lot. That man is now a millionaire, you know. But once he used to beg on the streets of Lucknow. Then I noticed in one Kumbh-mela, he was tagging along constantly with a sadhu. After some time, I found that he had opened a small shop in a dark and narrow shed at the town. He started selling small stone icons of Shiva-linga. By the next Kumbh-mela, he became a full-fledged businessman, dealing in stone icons of various types. How did it all happen? Because of that companionship with the sadhu. I know all this, brother. You cannot dupe me."
I was dumbfounded. This man was also a seeker, but seeker of what? Millions? At Kumbh-mela? On this sand-band? Just by running after a sadhu? Good God, I could not even imagine it.

This time I firmly said, "I’ve not got anything. You are wasting your time."

In Search of the Pitcher of Nectar
By Samaresh Basu (as Kalkut)
Translated by Nirmal Kanti Bhattacharjee
Niyogi Books
pp. 288, Rs 450