These pioneers later came to planet Swarg, carrying with them the best of art and literature they had preserved when they left Earth. 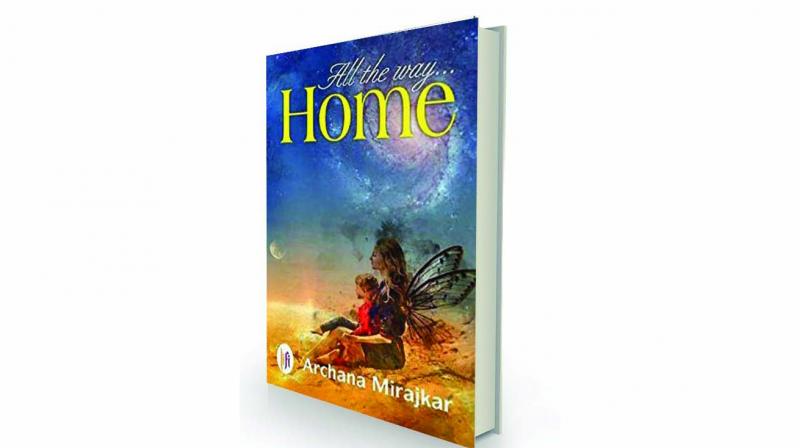 All the way home, By Archana Mirajkar LiFi Publications, Rs 350.

Archana Mirajkar’s novel All The Way Home literally transports the readers to Swarg, not the heavenly abode of the gods, but a planet where humans have settled down after the Final Wars on Earth destroyed the planet and most of mankind.

Let me get the backstory out of the way. After the humans on Earth had exhausted all their resources due to their overindulgence, corruption and negligence, constantly engaging in wars for basic resources, some people (the more scientific and entrepreneurial humans) fed up with these fights left Earth to settle in the colonies on Earth’s moon, Mars, and some other moons and asteroids. While colonies on Mars and Europa flourished, the ones on the moon and Titan were slowly abandoned, due to their bleak living conditions.

Now these smart colonists lived on Mars and Europa under harsh conditions in underground houses, tolerating the lack of air and water, continued to survive, only because of their passion to protect the humanity of mankind. It was here that the spark for true enlightenment was born?!

These pioneers later came to planet Swarg, carrying with them the best of art and literature they had preserved when they left Earth. Over centuries, these humans evolved into more compassionate beings, with sharp intelligence. Through centuries of genetic engineering, they changed into photosynthetic creatures with purple wings, doing away with their need for food, surviving on a morning and evening drink for hydration. These evolved and enlightened humans (not my words but the author’s), derived their daily energy from the sun -- Ravi’s rays, sunbathing with their wings spread out.

By eliminating the requirement for food, these humans kept themselves free for more important things in life, like eliminating diseases and infections and devoting time for fundamental research on life and the universe. When people on Swarg came to the end of their lives, this phase was characterised by their disinterest in life and daily activities, they went into their final rest aka death. This reminded me so much of samadhi that the ancients sages took, when they wanted to leave the world.

The story of All The Way Home is set in this Utopian world of Swarg, where the humans can fly like birds. The story starts with three-year-old Arushi, having a pearly luminescent body and shiny pale golden hair, being urged by her mom to master her flying, before she begins school. Arushi is lovingly called Bittu by her mom. Her mother works in EARTH Laboratory — Emission and Radiation Technology for Health, but her passion is history and astronomy, she loves reading about her ancestors on Earth. Arushi inherits this trait from her mother. Arushi’s father is a computationist at the centre for galactic studies.

Swarg is unique in many ways. The inhabitants of Swarg share a parental pact where they nurture a child together, the children aren’t born naturally. Until the kids who study in the academy till the age of 15, the parents are bound by the parental pact, once the kids go on to pursue their chosen professions, their parents are free to form new relationships. In Swarg, people move around in Zippers, and communicate through their Comms.

Arushi is one of the few natural born children here. She is extremely intelligent, just like her parents. At the age of 15, Arushi is chosen by the team of scientists, headed by Sherlac Windar, one of the most acclaimed scientists on Swarg, to be a part of the first planned mission to Earth. Arushi as well as a young crew of 15 astronauts start their training. Arushi’s job is to interpret the computational data on the movement of their spacecraft.

The chapters where Arushi starts training and preparing for her mission to Earth are interesting. So are the chapters when they are in space and land on Earth. On Earth, Arushi moves from Chile to Australia to the Himalayas and a few other places, taking samples of the soil and trees and digging up the ruins. In one of the places she finds things that change her perspective about life, about herself. I can’t say more than this, as it will be a spoiler.

Though Swarg reminded me of heaven in many ways, the people were a bit of a letdown. I didn’t find anything extraordinary about them. I wish Mirajkar had given her characters some kind of power, something like the sages of yore had, that would have taken the book to an altogether another level. The way the humans here behaved felt a bit too humdrum. In which way were these humans enlightened was something I couldn’t figure out. I personally felt that the world building could have been explored a bit more. Though there are many characters, Mirajkar has given them equal importance and they constantly figure in the story. And that is a huge achievement when a writer has so many characters in her story. The pace is decent, though at places the chunks of details weigh the narrative down. What I liked the most was the ending. Startling. Magical. Eternal. Leaving the readers mouth agape, it so suited the theme. Archana Mirajkar is a writer to watch out for. Read the book for an innovative world.

Rachna Chhabria is a Bengaluru-based children’s authorand a freelance writer. She is author of Festival Stories Through The Year (HarperCollins). In her soon-to-be published Shiva and Parvati in Magadhpur (Mango Books), she has delved into the world of gods.

Tags: radiation, all the way home