According to him, it is very hard to know the real life stories of the people unless one hears these from them. 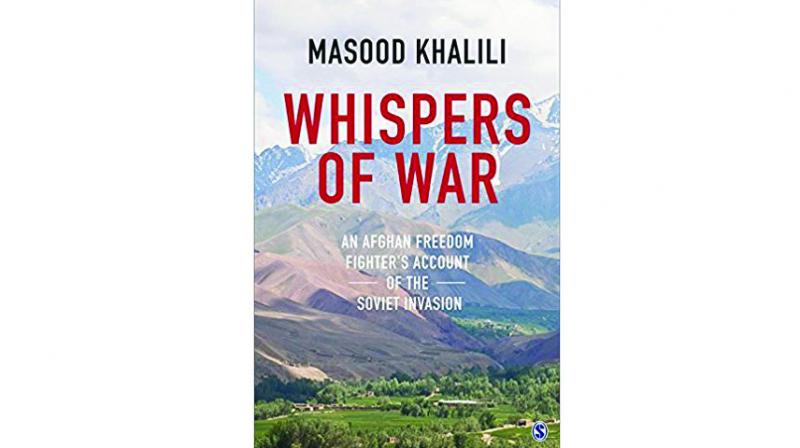 New Delhi: When Afghan diplomat Masood Khalili travelled through the high mountains to mobilise people against the invading Red Army, he missed his wife and to console his heart, he would take out his notebook and write the things he saw, felt, heard and experienced.

And now years later, one of those notebooks has been translated by his son into Whispers of War, a heart- wrenching tale of freedom and hope.

Whispers of War: An Afghan Freedom Fighter’s Account of the Soviet Invasion by Khalili, ambassador of Afghanistan to Spain and son of great Afghan poet Ustad Khalilullah Khalili, is published by Sage Books.

As a young political leader, Khalili motivated his people and led them in their fight against the Red Army. Alongside his friend, Commander Ahmad Shah Massoud, Khalili travelled on foot, horseback and donkey, sharing the tales of pain, despair, and despondence of his countrymen and women.

In letters to his wife Sohaillah, he writes of his journey through the Himalayan range, accompanied by a team of foreign journalists. The book is an account of the search for ever elusive peace in a country ravaged by war — a war that changed the landscape of the country and the fabric of its society.

“As I travelled through the high mountains of Afghanistan, I would miss my wife and the only thing that could console my heart, would be to take out my yellow notebook and write the different things that I saw, felt, heard and experienced,” the author says.

“In my 13 trips into Afghanistan over the course of the whole jihad, I travelled to every corner and in each one, I had one thing always with me and that was my notebook to my wife. One of those notebooks is the one that my son translated and we made into Whispers of War,” he says.

He describes his book as a journey of a young political officer who wanted to bring peace in his country.

“But more than the story of that young political officer, it is the story of the tears, pain, and suffering of the common people of that poor, war-torn country,” Khalili told PTI.

He says he would write to his wife almost every hour.

“Whenever we took a break to try and regain some energy in order to keep going on, I would take out my notebook,” he says, adding his notebooks helped him with that mental strength.

The inspiration for writing diaries came to him from love of his family and even more so the love for his nation.

“I wanted my wife, for whom I was writing, to really understand the depth of the struggle of my people as I was learning it by being with them. Family is number one in our hearts but our nation is just as important to most patriotic people,” he asserts.

He wrote over 40 notebooks, some political, some military and the others for his wife.

“My son, Mahmud, who translated Whispers of War has plans to translate one more of my notebooks. This one is the trip to Herat. It is a totally different kind of feeling because I travel through the Southern provinces of Afghanistan, which has a different people and culture than people of the North,” Khalili says.

According to him, it is very hard to know the real life stories of the people unless one hears these from them. He then recalls one such story when he saw a Nooristani woman extending her hand as if she was seeking alms.

“It was strange to me to see a woman begging in Nooristan. It was very unusual. They are poor but not beggars. I moved past quickly. At that moment, one of the men said loudly, ‘Khalili Sahib, she has something for you.’ As I turned back, I saw that the woman instantly covered her face with her old black headscarf and kept one hand extended towards me. I took a few steps in her direction and saw that in her outstretched, there were four walnuts,” he recalls.