Discovering the Queen’s love for books

One of the highlights in the Queen’s itinerary was the inauguration of the Indo-British Participation and Summit Meeting at Pragati Maidan. 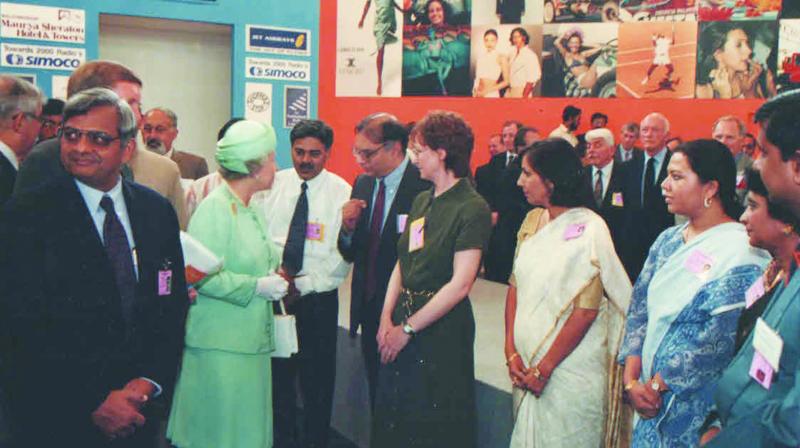 The year 1961 was momentous for many reasons. It marked the year when Soviet cosmonaut Yuri Gagarin became the first human to orbit the earth in his spacecraft. This made Gagarin a household name marked by a triumphal tour of many countries. I remember my school bus driver in Kolkata proudly sporting a Gagarin badge with the picture of the cosmonaut, a memento of his visit to India. It was also my last year in the school before being shunted off to a boarding school near Ooty in the Nilgiris in the following year. The year was also marked by a historic visit by Queen Elizabeth II and Prince Philip to India. As Kolkata was a part of the itinerary, I remember going with a friend to his father’s office in Mission Row to catch a glimpse of the Queen and her consort driving in a motorcade from the airport to the city. It was exciting to watch the Queen from afar and at a distance driving past with outriders as motorcycle escorts with bystanders as cheering spectators. Little did I know then that I would have a more direct and personal encounter with Her Majesty thirty six years later.

The-second visit to India by the Queen and Prince Philip was in 1997. This visit was not without controversy as it was marked by intemperate statements by both Britain and India. Apart from Delhi, the Queen was also to visit Amritsar and Chennai. The visit was a little ill-timed as during the early part of the Queen’s visit, the then Indian Prime Minister I.K. Gujral was away touring Egypt. The Queen’s itinerary was such that she visited Pakistan before India. Robin Cook, the then British foreign secretary stoked a controversy by offering Britain’s role as a mediator between India and Pakistan over Kashmir. This evoked a strong reaction in India with Mr Gujral angrily calling Britain a third rate power. Both were to withdraw their statements later. At Amritsar, the Queen publicly apologized for Jallianwalla Bagh but Philip made a controversial statement that the statistics on the number of victims in the massacre were grossly exaggerated. In the ensuing uproar, which led to a demonstration by descendants of the victims, Philip said he had based his statement on accounts given by General Dyer’s son who had served with him in the Royal Navy. At Delhi, the Queen for her part remarked adversely on the state of cleanliness of the Delhi roads. It was a trying time for David Gore-Booth, the then British high commissioner. The son of the famous Paul Gore-Booth, David, hard-pressed in his job, was to meet Mr Gujral at the airport to prevent his being recalled, which he duly was, a year later.

One of the highlights in the Queen’s itinerary was the inauguration of the Indo-British Participation and Summit Meeting at Pragati Maidan. The British Department of Trade and Industry had pulled out all the stops for this meeting. Representatives of all major industries were to attend and they liaised early with their Indian counterpart, the ministry of commerce to ensure full participation from Indian industry. There would be a major exhibition on Indo-British participation and this would be inaugurated by the Queen herself in which she would meet dignitaries. The British Council in England got in touch with its counterpart in India about participation. The then ever enthusiastic book promotion officer in the British Council at Delhi suggested a book exhibition by major representatives of British publishers in India and this was accepted with one proviso. The volume of trade in books between India and England was much too small to warrant space in the Hall of Technology, so the exhibition was housed outside at the rear of the main hall. It was a much smaller world of publishers then and Oxford University Press (OUP), Cambridge University Press (CUP) and Macmillan were the major publishers with stalls with Penguin, Collins and Prentice-Hall being represented by their distributors. I was in OUP then and as the Queen’s presence was an important one, we were all expected to participate in a rehearsal before the d-day.

As we lined up to secure entrance to the hall for the rehearsal, an English gentleman in front burdened with a large carton asked me for help. I carried the carton in for him and later as he thanked me he asked, “Young man, do you know what you were carrying?” Later, I realized it had been the Prudential Cup, the then trophy for the India-England cricket matches. Sure enough, the centerpiece of the hall was a huge blow-up of an India-England cricket match at Lords. At the rehearsal, we were all instructed in the etiquette of greeting the Queen. The British high commission was clearly not taking any chances. It sent one of its second secretaries to brief us. As the publishers were the responsibility of the British Council, its office in Manchester sent one of its executives who would reinforce the proper procedure.  The secretary said that as the Queen along with her entourage passed us, the men should incline their heads in a bow while the ladies should curtsy. In case the Queen chose to address any one of us, we were asked to keep our reply brief and to the point and always address her as “Your Majesty” or “Ma’am”. In case (heaven forbid) she greeted us by extending her hand, we were to lightly brush her fingers and not shake her gloved hand at all. Of course all this was extremely unlikely but the secretary had been asked to prepare for all contingencies.

Anyway, D-Day arrived and we all reported early. All of us were given labels which clearly stated the organizations we represented. The representative from the British Council at Manchester took up her position next to me in case I got adventurous. I was reassured for surely she would help to calm nerves. Finally, the Queen regally swept in along with her entourage and ladies-in-waiting. All the chief executives of the major British and Indian companies were all there. The Queen stopped briefly to greet a lord here and a sir there. She probably had conferred the peerage or the knighthood. She finally swept up to us flanked by Gore-Booth and the DTI officials.

As she passed me, she stopped. She looked at me as did everyone else and said, “I did not know that Oxford University Press was here!”. I replied quickly, “We have a book exhibition here, Your Majesty”. Continuing to look at me but possibly addressing her remarks to Gore-Booth, she said, “I was not informed that there was a book exhibition”. The Queen then swept on past us. My companion from the British Council had been so surprised at the encounter that she had forgotten to curtsy! But I always wondered. If she had been informed earlier about the book exhibition would she have changed her itinerary to visit it? Was she interested in books and a reader? Why is it we are no so well informed about the Queen’s reading habits and love for books?

Alan Bennett, the British dramatist, has written a wonderful book, titled The Uncommon Reader. In this, the Queen develops a reading habit and this causes much consternation both in Buckingham Palace and outside. Not least the Prime Minister, whose secretary is worried that all this reading might result in the Queen putting unwelcome questions to the PM.

In the book, the Queen happens to be reading Anita Brookner’s Hotel du lac while travelling by the royal coach along with Philip to address Parliament. While getting down, not wishing to alarm the MPs and feeling a trifle self-conscious, the Queen tucks away the book beneath the cushions at the back. On return, she gingerly feels around for the book but to her consternation she can’t find it. Philip is not of much help. She asks her equerry about the book, who in turn asks the page, who asks the footman, who asks the coachman and so on. She is finally informed that the security personnel had inspected the coach and removed an object that suspiciously resembled an object very much like a book. Asked why on earth would they remove her book, she is informed that security thought it was a device that could explode. “Explode”, the Queen says incredulously, “But it was only Anita Brookner!”

The writer is a senior publishing industry professional who has worked with OUP and is now a senior consultant with Ratna Sagar Books.