Yoddha, according to author Rajat Pillai is a ‘saga on the human condition and how true leaders emerge out of extreme adversity.’ 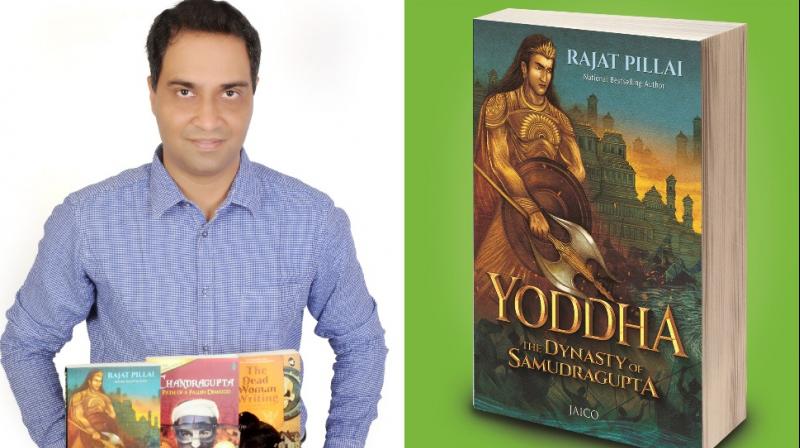 The author says that his efforts aim to bring about an interest towards the roots Indians have and make them question their origins and past.

Storytellers have, for thousands of years, repeated, interpreted and retold history and myths, often mingling the two to create something wondrous to the delight of listeners, and later, readers.

Rajat Pillai’s historic fiction, Yoddha; The Dynasty of Samudragupta is one such retelling that delves into the life of the historically significant ruler of the Gupta Empire, a time, often denoted by historians, as the Golden Age of Indian civilisation.

An MBA degree holder from a top B-school, Pillai is a self-proclaimed history buff, who finds immense pleasure in leafing through pages of history in search of, often, hitherto overlooked, unknown facts, and at other times, create reinterpretations of what was, what could have been, and what may have had transpired.

The life story of the first Mauryan emperor and the lack of contemporary storytelling on such legends affected him so much as to make him yearn to write something concrete, comprehensible on them. Thus, was born his first historical fiction, Chandragupta: Path of a Fallen Demi-god’ which went on to become a national bestseller.

Earlier this year Pillai published his third book, once again, a historical fiction ‘Yoddha: The Dynasty of Samudragupta’ which delves into the life of one of the most inspiring rulers in Indian history.

In conversation with this correspondent, the Mumbai based author who juggles multiple careers and passions speaks about his reasons behind writing Yoddha and shares other titbits as well.

The author confesses that he is constantly reading and researching Indian history. “I am constantly on the lookout for strange and difficult situations that they were put through and how they handled it,” he says.

The basic storyline for the book, Pillai says has been derived from the ancient text ‘Devichandraguptam.’

Elucidating upon his reason behind writing Yoddha, Pillai adds, “I had an inspiring moment while reading about Samudragupta and Chandragupta Vikramaditya. There was a certain episode in their reign which was bizarre, thrilling and interesting. I felt everyone needed to know more about this riveting episode.” That was the basis behind how the book evolved, suggests Pillai.

Yoddha, according to Pillai is a “saga on the human condition and how true leaders emerge out of extreme adversity.”

Elaborating upon why he felt he needed to write a historical novel at all, Pillai says that history books taught in school, have somehow fallen short in making the past interesting.

The author says that his efforts aim to bring about an interest towards the roots Indians have and make them question their origins and past.

“In a world where there are forces trying to McDonaldise everything, this deep dive into the past leads us to our unique identity,” he adds.

Braiding history and fiction is a ‘tricky’ thing Pillai admits, adding that basic plot and storyline have to be exactly as per historical records, however, it is the gaps in between that are filled with fiction.

“Certain amount of liberty can be taken based on circumstantial evidences and alternate interpretations as well,” he explains.

Imagining the lives of historical characters is no mean feat, and Pillai, achieves some level of success in this with Yoddha. The characters are well etched, each with their shortcomings and all, very human till the end.

Elaborating on it, the author says that historical accounts provide the basic nature, interests and high level orientations of the characters.

He explains, “Samudragupta was a great military general but also an expert musician. Chandragupta was a romantic, a risk taker and very brave. Once some of these high level traits are established, it becomes easier to predict related behaviour and finer mannerisms. Contradictory traits can also make the character come across as more human. The combination of all this creates a coherent living breathing character.”

While, Yoddha, from a reviewers point of view is a delightful read, encompassing intrigue, romance, conflict, murder and written in a lucid conversational style, the author, however, says that he is not planning any sequels to it.

He reasons that unlike the Chinese, Egyptians or Mesopotamians, Indian history is very poorly documented with large voids in between.

“I prefer jumping across timelines and dynasties to give the readers thrilling episodes from across our history and tying to stimulate their interest about our roots.”