Book review: Walking through Kabul, in the shadow of war

As someone who spent her childhood there, and who is distressed when Afghanistan is imagines as a forsaken wilderness populated by masked bandits, 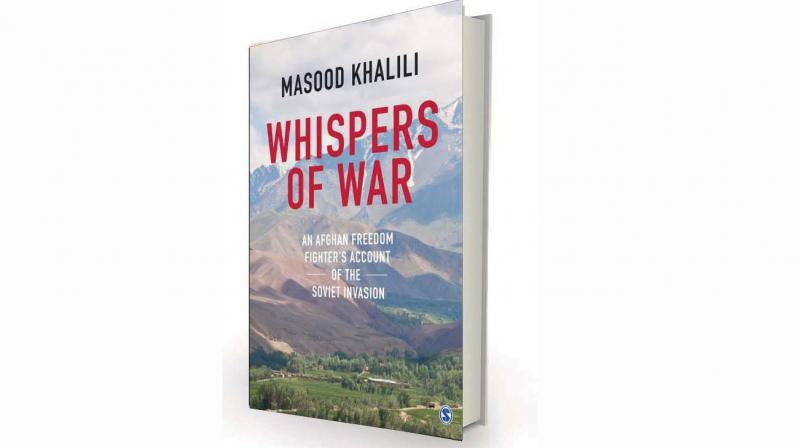 An unforeseen outcome of the attack on the World Trade Centre on September 11, 2001, was that Afghanistan, perhaps the most forgotten country in West Asia, was suddenly in the headlines: Osama bin Laden was assumed to be hiding somewhere in its inaccessible mountains under the patronage of the country’s Taliban government. Television channels scrambled for “experts” to comment on a country that had been shut off to the world for several years. Some were running interviews with a badly-injured Afghan man, who had survived a suicide bombing in North Afghanistan two days before the twin towers came down in New York.

The man was Masood Khalili, who is currently Afghanistan’s ambassador to Spain. As a young man, he had joined the popular Afghan resistance against the invading Soviet Army in the 1980s. Whispers of War is a diary he kept at the time, when he gave up a Ph.D. at Delhi University and threw his lot in with the popular guerrilla leader from the Panjshir valley, Commander Ahmed Shah Massoud. Crossing the Pakistani border with Afghanistan at Chitral, he travelled through some of the most remote and difficult terrain in the world to meet Commander Massoud, through the Afghan provinces of Nooristan, Panjshir, Baghlan and Takhar before returning — and nearly getting killed — via Kunnar. Even more impressive than his journey is the survival of his notebooks: they outlasted the surging rivers, the wild rainstorms, the teetering passes over which pack animals in his party plunged and died, and Khalili’s own exhaustion: he remained an indefatigable observer, commentator and recorder in the most hostile circumstances.

Modern prose writing in Afghanistan has been hobbled by decades of war, though of course there are many Afghan writers both in Afghanistan and in exile who are writing today. In that context, Khalili’s is a valuable account, written at a time when very little else was being written in the country. In any case, it’s unlikely that anything would have come close to this story of walking through Afghanistan at a cataclysmic time. Khalili’s father, Khalilullah Khalili, was one of Afghanistan’s great poets and Khalili’s writing has some of that literary gift: he’s a fine diarist, with both the power of precise observation and of the poetic flight.

Rather unusual literary companions for this book come to Its title suggests war and certainly war hangs like a shadow over every page — as Khalili travels, he meets the wounded and the displaced, and sees abandoned villages and destroyed landscapes. But it’s also a travelogue which documents and records landscape, culture and the little accidents and incidents of local life. The last time I read anything like this might have been Eric Newby’s A Short Walk in the Hindukush, if only because Newby also trekked gamely through the wilds of remote Nooristan as well, memorably describing one of its high passes as “one of the lonely places of the earth with all the winds of Asia droning over it”. Nooristan isn’t any less lonely by the time Khalili gets there, but he brings intimacy to his tale. It’s his wife’s home province, in his own country, where there is

“…No school, no hospital, no clinics, no roads, no grocery stores, no postman, no bakery, no barber, no butcher, no
electricity, no proper water channels, no transportation, no telephones, and no
administration…”

As we read on, we get a sense of why — historically — Afghanistan has remained unconquerable by foreign invaders. The wild passes that Khalili and his party struggle across are all easily over 11,000 feet. The travellers are hammered by sleet and rain on unprotected mountainsides and lose their pack animals over precipitous drops. The isolation of the landscape underscores the difficulty of everyday survival, in a country that has changed little over the last 500 years. Khalili has a difficult time making it through, struggling with constant exhaustion and starvation, living off whatever can be had along the way:

No spices, no salt, no pepper, no cooking oil, or any kind of vegetable can be found. What a lucky cook, what an unlucky customer! He has only meat and water to cook boiled goat or beef… Whatever the case, we love such cooks very much because… there is nobody except God and these poor tea houses or caves to offer us a cup of tea, a piece of bread, or a slice of boiled meat. This is why, the minute we see a cave-type teahouse, we rush like children running to a toyshop.

In a land of “nos and nothings” — as Khalili puts it — people reach out to the beleaguered travellers with whatever they can spare. This is an Afghanistan not written about in the standard analyses of the country in the terms of geopolitics and international terrorism. Khalili is moved by the charity and kindness of ordinary people (including a man who threatened to shoot his horse if it was not accepted as a gift), and their resilience in the face of devastating war. When a man gives both him and his foreign travelling companion cornbread out of khayraat (charity) Khalili asks him whether infidels should also receive charity. The man gets angry:

“Where are you from, deewana (crazy man)? You do not know the real meaning of Islam. Charity is good for everyone. Your stomach is not Muslim or infidel, it is either full or empty. In the next world, God shall ask about the charity you have given, not about whom you have given it to.”

His own humility and conscience informs every page, and he is moved to tears in unlikely places. Perhaps uniquely in the story of a difficult journey, he is affected by the fate of the donkeys and horses who accompany him   seeing them as the innocent victims of a human war and distressed by their injuries and inevitable suffering. And, despite near-total gender segregation, Khalili makes a point of recording whatever he can about the Afghan women he meets along the way: the ones who cook for him and his companions, gypsy Gujjar women who communicate to each other by shouting across mountainsides, desperate refugee women, carrying their injured children and a fascinating account of a woman accused of adultery, who is eventually acquitted by a tribal court. When the wife of a local commander makes paranthas for his onward journey, he blesses her in in his diary — being unable to do so in person — and, unusually for a man, acknowledges how difficult it would have been for her to cook for them, with an entire household to otherwise manage.

At the heart of Khalili’s diary is an intimate portrait of Commander Massoud. We meet an intelligent and genial man, given to friendly banter when amongst friends and the appreciation of mystical poetry during rare moments of leisure, a focused commander who demands complete attention while talking and the committing of every strategic detail to memory, a man deeply involved with the fate of his country, one who saw the need for a larger vision and plan, above tribal loyalties and one very fond of his Maxwell instant coffee, beaten to a froth in imitation of a cappuccino.

No one can say today what Afghanistan’s future might have been under Massoud had he survived, but there has been a general agreement that the commander was committed to workable democratic politics for the country, and against a theocratic model. Ahmed Shah Massoud was a legend in both his life and death, and Khalili’s account of him is an important one for any future biography.

While Khalili survives a battle with Massoud, he comes closest to death as he returns to Pakistan. He and other civilian refugees are trapped on the exposed bank of the Kunnar river, waiting to cross. Soviet helicopters show up and drop bombs on the defenceless people, some of whom are already injured and waiting to cross into Pakistan for medical treatment:

“Oh God, a new tragedy was upon us. At the sight of these flying dragons, the mother of the wounded child started screaming loudly, ‘Allah, Allah, doomsday is upon us!’
“The dragons’ attack started and they mercilessly targeted our location… The sounds of rockets, the burning breath of fire and the tremors of the earth made everyone fall motionless and silent. Even the mother of the wounded child stopped screaming… All I could do was to pray in my heart for an end to this hell.”

Afghanistan’s hell, of course, carries on. Khalili’s diary shows us a people who have survived nearly three decades of a merciless war because of their innate strength and independence. More importantly, it shows us people who deserve peace, a future for their children, a democratic government and the basics of civilised life.

As someone who spent her childhood there, and who is distressed when Afghanistan is imagines as a forsaken wilderness populated by masked bandits, I can only thank him for placing his compassionate and insightful diary before readers: an account of — in my own biased opinion — the best country in the world.

Anupama Chandra is a film editor and bibliophile