Manoranjan Byapari: ‘I haven’t written my best story yet' 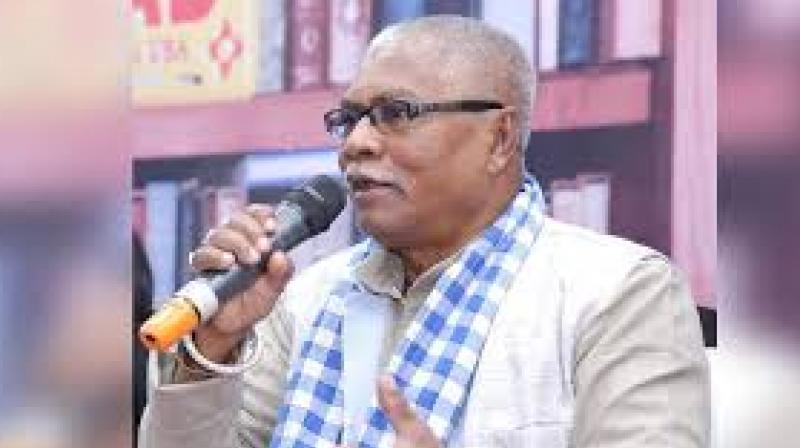 Manoranjan Byapari: 'Casteism decides on your behalf, it clips your wings, it curtails you.'

On the sidelines of the Jaipur Literature Festival, Manoranjan Byapari tells Sucheta Dasgupta all about what informs his craft, why he would like a break from the school kitchen and what it takes to become a writer of stories.

You are a working class hero and a man of many adventures. To inform our readers, could you tell us the different places you have lived in? What are the many jobs that you did for a living?

My jobs? I have been a goatherd, a tea shop help, a porter, a rickshaw driver, a night guard, a sweeper, a crematorium guard, a cook and so many other things. I was born in Barisal, Bangladesh. I have lived in the Bankura Shiromanipur camp, Siliguri, Jalpaiguri, Lucknow, Bastar, Kolkata and one or two other places as well. I have lived many lives in one, and I drew on them all to write my novel, Chhera Chhera Jeebon (Life in Slices).

When did you go to prison and for what reason? How many months did you spend behind bars? When and how did you secure your release?

When and how did you meet Shankar Guha Niyogi and what was the nature of your interaction with him?

I used to be part of a rickshaw drivers’ trade union and I came into conflict with Citu [Centre of Indian Trade Unions]. They wanted us to join them but we had seen that they would take subscription from us and disappear when we really needed help. Then they would force us to strike work and ferry voters for free during elections. When we did not agree to joining them, they beat us up. So I left West Bengal and went to Chhattisgarh. My father had once lived there. I began putting up in Bastar. I had heard of Niyogi’s good work in Dalli. He had been mobilising support for a Lok Sabha candidate in Dandakaranya and we joined him. That’s how I met him. I had been working under him for the Chhattisgarh Mukti Morcha since 1989. In 1991, he was shot dead.

Harichand Thakur led a fight against Brahminism. He founded a religious cult in which he said there was no need to follow ritual. He opposed the requirement of priests for conducting worship. He was influenced by Buddhism. Yet some people have turned him into an incarnation of Vishnu and brought him right back into the mainstream Hindu fold. Thus his movement has been brought down. So I researched his life and wrote Matua Ek Muktisena (Freedom Fighters of Matua). It was to preserve his legacy for the future generations.

Who are the other heroes of the Namasudras?

Jogendranath Mandal is the greatest political leader of the Namasudras. He was the man who has contributed most in terms of sending B.R. Ambedkar to the Constituent Assembly. Vallabhbhai Patel and his group had got him defeated in Maharashtra. It was Jogen Mandal who brought him to East Bengal, canvassed for votes on his behalf and got him to win the crucial ballot that sent him to the Constituent Assembly.

Do you write about the future or the past? Have you ever felt you lost a story because you lived through it until there was nothing left to write about?

I have lost many stories. But I haven’t written my best story yet. When I write it, I will feel that I have written everything, I will no longer wish to write anymore. I write about the future, too, and I write for the future, and to help build a better future.

What is the most satisfying piece you have written and why?

Every piece I write I feel happy I have written it. Two of my novels I waited long to write. One was Matua Ek Muktisena. The other was Maron Sagor Pare (Beyond Death’s Shore).

What is the connect between reading and writing? Do you find time to read?

The person who does not want to read cannot write. If you don’t read a hundred books, you cannot write one of your own. It’s not just about the information – how else will you know about switching perspective and about different styles of writing?

Who is your favourite writer and why?

I have four favourite writers – Mahasweta Devi, Samaresh Basu, Shrilal Shukla and Jajabar (Binoy Mukhopadhyay). Let me tell you about Shrilal Shukla’s Raag Darbari. It is set in Bihar where homes are built so close to one another that they don’t paint the outer walls. A motherless girl is told by her father – do not go out the door. There are men outside waiting to do evil things to you. The girl is a faithful daughter. She doesn’t disobey her dad. So she has never stepped outside the door. Whenever she needs anything, she jumps from terrace to terrace to go wherever she wants to go. As I said, it is all about perspective.

You call yourself a Chandal both by caste and by temperament. What is your comment on Kamalkumar Mazumdar’s Antarjali Yatra which revolves around just such a character?

Kamalbabu should have made the girl live and elope with the chandal.

Describe your wife. How did you meet her?

My wife is a very good girl. It is because she has stood by me through thick and thin that I can write my stories. I met her when I had fought off some people trying to abduct her. Later on, we became friends. I went to the orphanage where she lived and they arranged our marriage.

What is your next project?

I had lived with adivasis and observed them closely while I was working with Shankar Guha Niyogi. Their society, culture, and even sexual mores are very different from others. Have you heard of ghotul? Besides that, they barter their produce and there is relative prosperity. There is no feudalism. I had written a novella, Onyo Bhuban (A Different World), on their lives. Now they will republish it, so I am adding a few pages.

Does casteism exist in Bengal? How does it play out in Bengali society today?

Casteism doesn’t exist in West Bengal the way it does in Gujarat, Uttar Pradesh or Bihar. There is no untouchability. Low caste people cook in dominant caste homes and they eat the food. The trouble begins when a lower caste person acquires education or relative power and prosperity. When they see them as a rival, the upper caste people will plot to stop his progress.

Manoranjan Byapari has won a Sahitya Akademi award, the 24 Ghanta award, the Gateway Litfest Writer of the Year, the Hindu prize. He got shortlisted for the JCB Prize and the DSC Prize. He is a writer, no doubt, but he must still cook for a living. For five years, he has been requesting the state government of West Bengal for lighter work because his knees have been operated upon, so he cannot stand for too long, but no. The man has published 18-20 books, what more does he want to write? This is how casteism works; it decides on your behalf, it clips your wings, it curtails you.