Conceived by a few hard core professional IN officers in 1971, Operation X was innovatively conceived and meticulously planned and executed 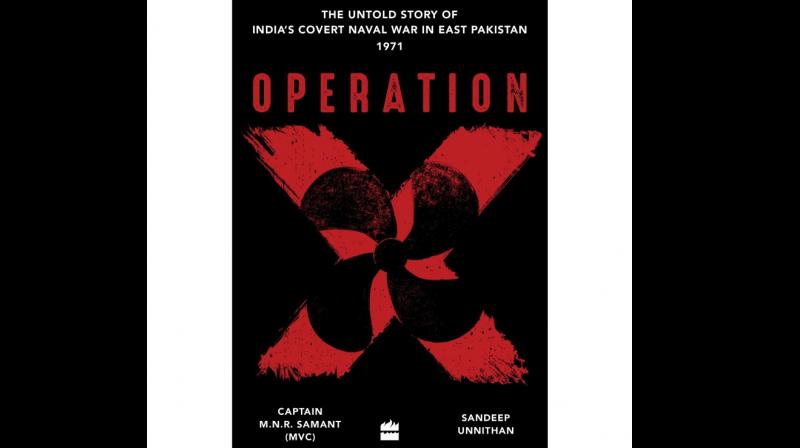 Codenamed ‘Operation X’, the untold story of India’s covert naval war in East Pakistan in 1971was put together in a book with the same title by Captain M.N.R. Samant, one of IN’s hardcore professionals and Sandeep Unnithan, the journalist son of a naval officer, and it turned out to read like an unputdownable thriller.

In 1971 the then Naval Chief Admiral S.M. Nanda got the green signal from then Prime Minister Indira Gandhi for the Indian Navy (IN) to participate in the 1971 Indo-Pak war. It was the first time since Independence that the Navy was used and it performed brilliantly.

While IN’s actions on India’s Western seaboard were quite visible and lethally effective in achieving a blockade of Pakistan’s Karachi ocean front in the Arabian Sea, not all its actions on the eastern seaboard/Arabian Sea and East Pakistan were known. And that was because a bold decision was taken by Indian Navy to launch a covert special operation to target Pakistan’s maritime activity and assets in and around erstwhile East Pakistan.

Conceived by a few hard core professional IN officers in 1971, Operation X was innovatively conceived and meticulously planned  and executed. Being the kind of operation which must be kept secret, it was also one with which the launching country would want to ensure that it cannot be connected.

Codenamed ‘Operation X’, the untold story of India’s covert naval war in East Pakistan in 1971was put together in a book with the same title by Captain M.N.R. Samant, one of IN’s hardcore professionals and Sandeep Unnithan, the journalist son of a naval officer, and it turned out to read like an unputdownable thriller.

The book recorded the painstaking process of preparing and training young men into combat divers. The first lot of trainees were some Bengali personnel of Pakistan navy, who hearing about atrocities by Pak army against Bengalis in erstwhile East Pakistan, were trying to desert and escape to get back there. Their attempts led them to be selected for this covert operation and they turned out to be master divers of a group raised in utmost secrecy by Indian Navy. Trained as clandestine swimmers, they eventually succeeded in devastating Pakistani warships and merchant vessels ferrying important stores for Pakistani forces before and during the 1971 India-Pak war and, importantly, contributed in the effort to liberate East Pakistan.

The book describes how between April and November 1971, this covert naval unit trained 432 Bengali youth and launched them to destroy merchant shipping which sustained the Pakistan Army in the run-up to the 1971 War.

The naval commandos, under the operational control of Naval Intelligence, sank and disabled over 1,00,000 tonnes of shipping destined for the ports of East Pakistan. Operation Jackpot involved 176 combat swimmers launching simultaneous attacks on the ports of Chittagong, Chalna-Mongla, Narayanganj and Chandpur on the night of August 15, 1971. They sank 44,500 tons of shipping and damaged 14,000 tons, the single largest attack by naval saboteurs since the Second World War.

On completion of the phase of training as clandestine swimmers, the next phase was to train the swimmers to go underwater a few feet to reach a ship’s hull and place limpet mines and swim away fast enough to escape death or injury by the explosion of the mine. All this was achieved by very exacting standards of tough training and, above all, secrecy.

Two of the key figures involved in what is considered as one of the largest covert maritime warfare operations since the Second World War spoke about their experiences in public for the first time in Mumbai on October 12, 2019, when this book was launched. They were Commander Vijai Prakash Kapil, Vir Chakra (retired) and Petty Officer Chiman Singh, Maha Vir Chakra (retired) were part of an ultra-secret Naval Intelligence unit which trained Mukti Bahini naval commandos before the outbreak of the 1971 India-Pakistan War. They spoke about their experiences during the book release function at the Indian Merchant’s Chamber, Churchgate, Mumbai. The book authored by the late Captain M.N.R. Samant, MVC, and journalist Sandeep Unnithan, was released by Admiral V.S. Shekhawat, former Chief of the Naval Staff and a decorated 1971 war veteran submariner. However, Captain Samant, the staff officer planning and training this covert unit, missed the launch of his book as he passed away in Mumbai on March 20, 2019, after a brief illness.