Books   15 Feb 2019  As polls loom, much to celebrate about India’s democracy, despite shortcomings
Books

As polls loom, much to celebrate about India’s democracy, despite shortcomings

The Indian Constitution was promulgated on January 26, 1950. 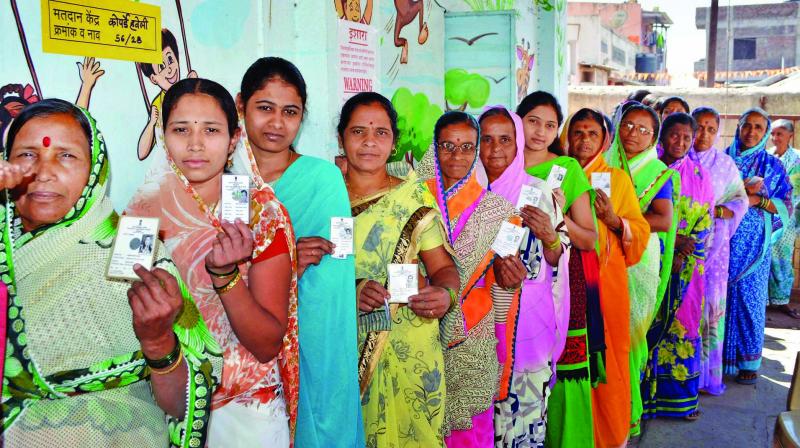 Democracy, a work in progress: At a zilla parishad panchayat samiti election at Koparde village in Karad, Maharashtra. (photo: PTI)

The vote is the most powerful instrument ever devised by man for breaking down injustice and destroying the terrible walls which imprison men because they are different from other men.
— Lyndon B. Johnson

Real freedom is experienced when citizens can speak freely without fear. Democratic elections provide the platform for citizens to assert their civil and political rights by holding their elected representatives accountable. Elections may or may not ensure that a society will become socio-economically equitable, but they do provide a starting point for justice, equality and good governance. Hence free, fair and representative elections are essential for consensus-driven development.

The value of the vote for every adult has long been recognised by our people. The demand for every man and woman to have a voice in nation-building lay at the heart of our freedom struggle. The history of the demand for universal franchise in India goes back to the nineteenth century. The Constitution of India Bill (1895) was the first non-official attempt at drafting a constitution, wherein it was declared that every citizen living within the territory had the right to take part in the affairs of the country and to be admitted to public office. The Nehru Report of 1928 reaffirmed this idea of progressive citizenship, as did numerous such reports and resolutions during the freedom struggle. The electoral process itself was far from a novelty to us, as we already had significant experience of running provincial governments due to the acts of 1919 and 1935. What was lacking was sovereignty — a government of, for and by the people.

Hence, despite doubts and fears from many quarters, founders of post-independence India adopted the system of universal adult suffrage without virtually any debate in the Constituent Assembly, thus reposing faith in the wisdom of the common Indian to elect his or her representative to the seat of power.

Needless to say, the socio-economic indicators were appalling when independence came directly in the hands of ordinary people. It was a period when approximately 84 per cent of Indians were illiterate, and an equal number languishing in poverty. The makers of our Constitution were fully aware of the long list of challenges facing this unfathomably diverse country, which was traumatised by the unspeakable horrors of the Partition and plagued by a highly fragmented social structure of caste-based hierarchy. It may be recalled that the UK granted voting rights to women in 1932, about 100 years after its first elections. The United States held its first presidential elections in 1789, but women voters had to wait for the 19th amendment to their Constitution in 1920 to be able to vote.

France and Italy did so only in 1944 and 1945, respectively. But our Constitution ensured that the oppressed masses of India had already voted in many elections before Switzerland allowed its women to vote in 1971 and Australia its aborigines in 1967.

The Indian Constitution was promulgated on January 26, 1950. But Article 324 of the Constitution, which created the Election Commission of India as a constitutional body, was among the very few provisions that were given effect a full two months earlier, on November 26, 1949. Interestingly, the ECI was set up on January 25, 1950, a day before India became a republic. Over the past seven decades, the Election Commission has delivered 16 elections to the Lok Sabha and over 400 elections to state Legislative Assemblies, thus facilitating peaceful and orderly transfer of power.

In the past 71 years, India has seen a deepening of democracy and respect for constitutional morality. Lowering of the voting age from 21 to 18 years in 1989 was an electoral reform of great significance. Heterogeneity of parties and the rise of coalition politics reflect a bouquet of diverse aspirations and the innumerable positives of power-sharing and consensus-building.

The 73rd and 74th amendments have enabled the realisation of grassroots-level decision-making in our villages and urban local bodies, which embodies the true spirit of “self-rule” as envisaged by our freedom fighters. The rise of political leaders belonging to the marginalised sections of the society, farmers, women, and minorities to head the national and state governments as well as the upward trend of participation of women, tribals, urban and rural poor in the decision-making process can be traced to the untiring efforts of the Election Commission in conjunction with an increasingly proactive civil society.

A stunning example of the inclusive nature of Indian democracy, which is a source of great pride and satisfaction, is that a country where 80 per cent of the population is Hindu has had four Muslim, one Sikh and two dalit Presidents, including the current one.

Several Muslim vice-presidents and a Sikh Prime Minister have adorned the top positions in our country. The largest democracy in the world is now ruled by a Prime Minister whose mother was a domestic help and who himself worked as a tea vendor to earn a living. There was also a time when four of the largest states (Uttar Pradesh, West Bengal, Tamil Nadu and Rajasthan) and Delhi, the national capital, were governed by women chief ministers. They all came to power through elections conducted by the Election Commission of India.

As India’s democracy marches on, our immense economic, demographic and social potential continues to stun the world and even our own selves. The potential of democracy is unparalleled as it accommodates diverse interests and aspirations. This is why Nobel laureate Amartya Sen has remarked that a country does not become fit for democracy, but becomes fit through democracy.

While there is so much to celebrate, it is also imperative to be mindful of some shortcomings in our system that leave a lot of scope for improvement in democratic mechanisms. Many electoral reforms are long pending due to lack of political will or plain lethargy. Reforming campaign finance laws, decriminalisation of politics and bringing in a proper law for transparent constitutional appointments to posts, such as that of the CEC, are just some of the many issues regarding which the ECI has repeatedly written to the government. Several important reforms have come through the intervention of the judiciary, which has always acted as a guardian angel of democracy. As the country moves forward, many old and new challenges are surfacing, calling for a swift and decisive action.

As we approach the 17th Lok Sabha elections, it is useful to look back and appreciate our momentous achievements while being mindful of our shortcomings over these adventurous seven decades.

This volume aims to do just that — celebrate seven decades of India’s unique democratic experiment by compiling opinions on various aspects of the electoral process from eminent voices all around the world who have proven their mettle in academia, social work, public service, industry, journalism and the cinema. It is an attempt to look at electoral democracy through different frames of reference — political, historical, social, economic, journalistic and administrative.

This is excerpted with permission from publishers Penguin Random House from the introduction to The Great March of Democracy: Seven Decades of India’s Elections, by S.Y. Quraishi, former chief election commissioner of India