Pride and prejudice in a percussion tradition

Caste dynamics also change over time, showing up this book as an outstanding work by a gifted musician. 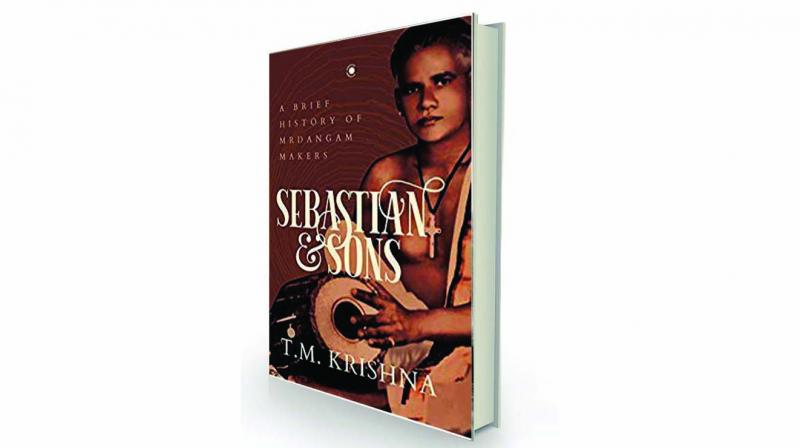 It is like a wake-up call thirsting for fraternalism of the human spirit. Sebastian & Sons is not about any corporate history as its conjunctive title may initially suggest. It is much deeper, a brave new narrative towards an archaeology of the social and cultural roots of the mrdangam, the primary percussion instrument in the Carnatic music tradition in the South, as seen in its institutional setting in modern times.

Taking forward his deep reflections on caste discrimination in his earlier book, A Southern Music: The Karnatik Story, eminent classical vocalist, activist and thinker T.M. Krishna in this latest offering has brought hides and skins into focus, a vital backyard awaiting full integration, in a raw, yet aesthetic faceoff between the mrdangam makers and players.

A work with multiple strands, it dovetails contemporary history, sociology, biographical notes, chemistry and physics, centred around the incredible, ultimate desire for tonality (pure “naada”) from a rhythmic instrument that defines its being and cultural niche.

Besides T.M. Krishna, a somewhat compelling half-Chomsky in Carnatic music circles, where eternal reverence is the norm, raising fundamental issues on the creative act of thinking and doing itself, this book is also a critique of the brahminical way of life, informed by strict rules of aachar, which define distancing and ritualistic pollution.

Topping these is a stronger supervening layer, the individual professional standing of star percussionists, mostly from upper castes, their “intellectual pride” in leading and shaping a musical tradition, and anonymous groups of families at the bottom of the pyramid, the mrdangam makers from among the dalits, occupationally tied to the “dirty work” for centuries.

From the “Superstar” Palghat Mani Iyer, the iconic mrdangam maestro at the top, more so since Carnatic music performances moved out of the patronising princely state scions, zamindars and landlords of a feudal era, to the evolution of the kutcheri format in urban areas with the birth of institutions like the Music Academy in Madras in 1928,  to the next-in-caste hierarchy and his main professional rival, Palani Subramania Pillai, there is a vast spectrum of cultural history and geography covered here.

Alongside, there is a long line of their distinguished successors, like Umayalpuram Sivaraman, T.V. Gopalakrishnan, Palghat  Raghu, T.K. Murthy from Trivandrum who became M.S. Subbulakshmi’s “most trusted percussionist” as the author puts it, the “formidable” Pudukkottai Dakshinamurthy Pillai, Trichy Sankaran, Karaikudi Mani and Vellore Ramabadhran to name a few, to the less blessed in the caste gradation, like C.S. Murugabhoopathy  and Thanjavur Upendran (who were from OBC castes like Servai, a sub-sect of the Thevars in the South, or even “lower” castes like the Isai Velalars), all the faces are pretty well-known.

But this narrative has shined the light for the first time in a path-breaking work on the complementing souls to these great artistes, the unheard-of and the unsung mrdangam makers, dalit Christians based out of Thanjavur, the once cultural hub of the erstwhile Madras Presidency in Cauvery delta.

Krishna writes that while the “earliest mrdangam artiste we know of and to whom we can trace the instrument is Narayanasvami Appa, a descendant of one of the families that migrated to Thanjavur when the Marathas were in power (1676 is when Ekoji became the first Maratha ruler of Thanjavur); he is considered the father of mrdangam-playing”.

However, there already existed a mrdangam-playing tradition influenced by the thavil, "which continues to be the only percussion accompaniment for Nadasvara ensembles." But the older styles were happily, “deliberately” forgotten, by the mid-1950s when the “Maratha-influenced Thanjavur tradition became the Brahmin style, while the Thavil and Sadir (as Bharat Natyam was earlier known) inspired Pudukkottai tradition became associated with the Isai Velalar aesthetic”, Krishna says.

Move a little further in the timeline, “the first mrdangam maker whose name appears in oral history is Arogyam”, chronicles Krishna, whose work is based on painstaking fieldwork and extensive interviews with both a range of artistes and the instrument-makers over at least three generations, a huge scholarly effort spread over three-and-a-half years. Arogyam was assisted by his son Sevittian (Sebastian) and from there a more definitive family tree of those from the “untouchable” caste who make mrdangams begins. Hence Sebastian & Sons, in which the author turns an empathetic ethnographer in documenting this history.

Sebastian was “nudged” by his Madurai-based cousin, Ratnam, that led to the “Thanjavur style” in mrdangam making, even as Sebastian’s three sons, oldest S. Shengol, second S. Parlandu (Fernandes) and youngest S. Antony (known as “Shetty”), later emerge as craftsmen.

The internal debate over at what point of time the Hindu caste system became too oppressive for these dalits and they “converted” to Christianity to enable their socio-economic mobility, lingers. Yet, what equally matters is their handicraft of meticulously working with skins of buffaloes, cows and goats, which go to make the three layers of the mrdangam to get the best tone and resonance from these skins when affixed to two sides of a wooden shell that makes it a resonance column in a complex binding process. In fact, a top artiste like a Palghat Mani Iyer would demand that tonal quality, if only to pip his rival Palani Subramanya Pillai at concerts, the author shows.

As Krishna walks and writes about this journey in a remarkably lucid style, a basic question that keeps popping up is this: Despite the benign paternalism of the mrdangam artiste towards the instrument-maker – Mani Iyer’s and Parlandu’s inter-dependency is again a classic example of both needing each other — it is the caste system legitmised “entrenched hierarchy of knowledge and skills” that relegates the mrdangam makers as inferior and dispensable. There is an in-built historical asymmetry in their relationship.

Besides questioning the dogmas of beef eating, Krishna takes us through sociologically absorbing lanes and by-lanes of how and why the mrdangam makers shifted to Madras from Thanjavur, the presence of other makers in neighbouring Andhra Pradesh, Bengaluru and Kerala, the women in the hides business, skins of different types, processes of curing, the enigma of the sounds from the wood of the jackfruit tree used for making the outer shell and so on.

Caste dynamics also change over time, showing up this book as an outstanding work by a gifted musician. On hindsight, Kalakshetra misreading its intent in cancelling its auditorium-booking for the book launch came as a blessing in disguise!