A bit of science, innovation and a lot of story telling

A bit of science, innovation and a lot of story telling 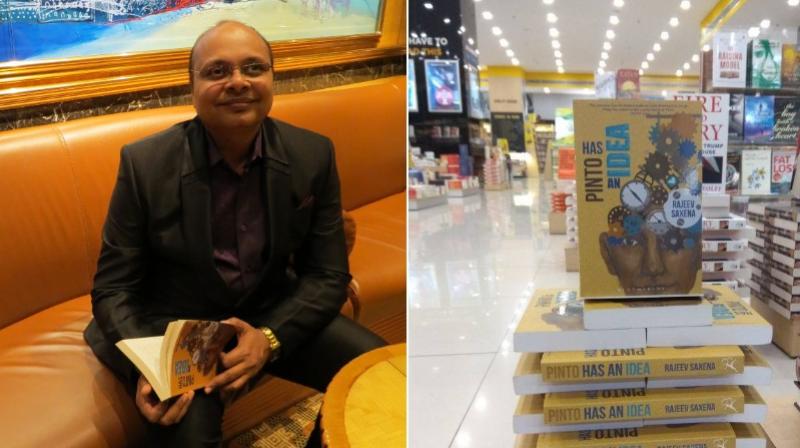 The IITian author adds that the most important motive he had was that he wanted to write a book.

Rajeev Saxena's debut novel Pinto has an Idea is the tale of Dr Pinto, a small-town boy who works his way to becoming an IITian and a scientist who is working in MIT. He suddenly experiences a life-changing revelation in the early days of his research and throws away his work on theoretical physics, setting out to solve everyday problems of the world he lives in.

Speaking to this correspondent, Saxena says that there was no single reason for him to write the book.

The IITian author adds that the most important motive he had was that he wanted to write a book.

“It was somewhere in the back of my mind that I need to produce something more serious in nature.”

Adding that he is a very keen observer Saxena elaborated that whenever there was something unique happening or whenever any idea came into his mind he would just jot it down and soon enough he felt that he had enough material to write a unique book.

“I feel this is just not a novel, it’s my way to contribute to the society. When you read the book, you’d realise it what kind of positive changes it can bring among readers.”

He further quips that perhaps hankering for a bit of appreciation too acted as a catalyst in him writing the book.

Saxena’s Pinto is not a conventional romantic hero. He is perhaps a geeky scientist, who feels that he has a greater calling in life.

Elaborating on the characterisation, he adds that these days our life is so much dependent on inventions and innovations that we can’t imagine a world without constant positive scientific changes. However, more often than none, we tend to forget the people behind those innovations. That is primarily the reason behind him choosing a scientist to be the protagonist of his novel.

“What kind of people they are, how they think, how their family life and love relations are and so on are some of the things I wanted to highlight,” he says, adding, “It’d also inspire young generation to choose scientist as a career path. Somewhat every one of us can think like Pinto, innovate and achieve like Pinto but we need some motivation, a little trigger to bring best out of us.”

Saxena calls his debut work a semi-Sci Fi. “I could have used a little more imagination to call it a complete work of sci-fi,” the author agrees, adding that a lot of ideas Pinto works on can be implemented immediately in real life.

As for whether Sci Fi is actually popular in India, he adds, “While Hollywood produces several Sci Fi blockbusters every year, Bollywood does almost nothing. I think readers in India are not ready for Sci-Fi. It’s like wine drinking in India. The taste will gradually develop.”

Elaborating further on the novel, Saxena reveals that in the book Pinto does not like to appear as a romantic person, and keeps women at bay. But when a certain Lavanya returns to haunt his life, she shoe-horns him into marriage and he obligingly falls in love.

Love, according to the author is extremely important but practical realities and challenges come on a person’s way.

“That’s the truth of life. As an author you have one of the two choices to make. Either you show the fairytale side of it that everything is going according to your dream and in an ideal way you’d want or you embrace the tough realities and real life struggles into it.”

The author says he chose the second option as his main motive is to inspire readers using novel as a medium.

“If my novel is not close to pragmatism, readers won’t believe in it. The positive side is that even though there are real challenges, if they are handled well, you’ll come out as a winner.”

Pinto Has An Idea, the author believes is not only replete with romance, fun, comedy and all other standard stuff but at the same time it touches the intellectual side at much deeper level, and has the ability to motivate a person and give a positive message to the society. “After reading it, I’m pretty sure that you’d like to do something for your people, country and the society. I’ve received several great comments from readers as well as endorsements from celebrities including from the late Bollywood superstar Sridevi,” he says.

As for what’s next, he concludes, “At present I’m busy with the promotion of Pinto Has An Idea. There are a few ideas in my mind. Hopefully my next book will be out by the end of 2018. I think it’d be too early to disclose anything.”

Notably the recently deceased actor Sridevi wrote about Rajeev Saxena’s book, “The moment I got the book, I could not resist finishing it in one go. You'll always be curious to know what Pinto is going to do next. I hope the author writes a series of it.”