Books   17 Jul 2021  Congruity, not clash, of civilisations is at root of Sen’s academic vision
Books

Congruity, not clash, of civilisations is at root of Sen’s academic vision 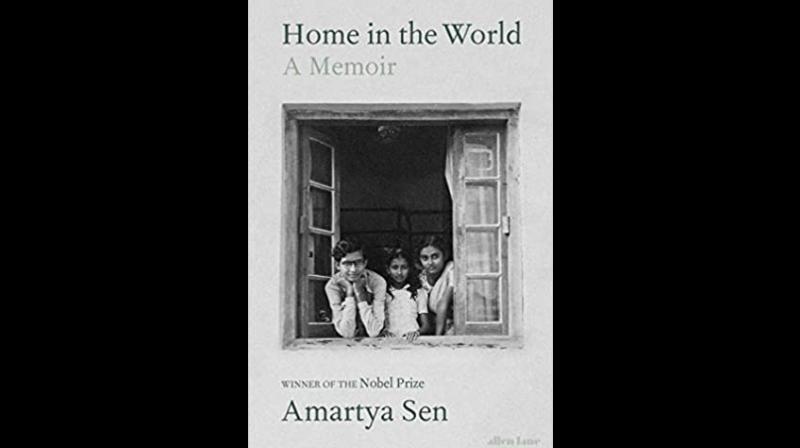 Cover page of 'Home in The World; A Memoir' by Amartya Sen. (Twitter)

Arguably, Amartya Sen is pre-eminent among the galaxy of world-ranking India economists. He has now published his memoir. Some parts of it may merely engage an Indian, even only a Bengali. Others, like his experiences at Cambridge, will engross a wider audience. Overall, it whets one’s appetite without satisfying it, for it is an unfinished effort, which leaves unattended his later rise to international stardom.

Sen spent three years of his childhood in Mandalay, Burma (where his father Ashutosh ventured as a visiting professor in chemistry at the agricultural college). His earliest memories emanate from there, and he says, “I could not have been happier.” He found it to be “a very agreeable place, with eye-catching buildings, beautiful gardens, intriguing streets, the old royal palace and its moat”. And he remembers his “breathtakingly lovely” Burmese nanny.

His formative years, though, were his decade at school in Rabindranath Tagore’s “Abode of Peace”, or Santiniketan, in rural West Bengal, and at Presidency College, Calcutta, with the nearby Indian Coffee House, where students retired for “engaging discussions and debates”. The book dwells in culture, history and society and limitedly in political thought. However, his launch into academics, he discloses, was founded on his vision of world civilisations as an inclusive conglomerate rather than the more recent shrill propagation of them being hostile to and incompatible with each other.

He found distinguished Cambridge economists less concerned about issues like inequality, poverty and exploitation. Referring to Joan Robinson’s thinking — which has become quite popular in India — that a country can turn to healthcare and education once it has become rich, he argues, “This approach is, I think, one of the more profound errors in developmental thinking, since the need for good health and good education is at its peak when a country is poor.” Thus, his plunge into welfare economics.

His maternal grandfather Kshiti Mohan Sen was an eminent scholar and author of a classic work entitled Hinduism. He was also Tagore’s lieutenant in curating Visvabharati as an educational institution in Santiniketan. The poet laureate chose his name, that means “immortal” in Sanskrit, but more literally “unearthly”, an interpretation the inheritor prefers.

Sen’s primary education began at St. Gregory’s School in Dhaka, where the boys would outshine students from everywhere else. But the Gregorian spirit didn’t suit him. He came 33rd in a class of 37. With Japan knocking on British India’s doors, he was moved to the sanctuary of Santiniketan, which didn’t interest Japanese bombers as the Calcutta docks actually did. Yet he would return to Dhaka for his holidays until the move away to West Bengal for the family when the guillotine of Partition struck.

Classes in a “school without walls” was “fun”; but academically “not particularly exacting”. After much debate, for the social climate in Santiniketan was strongly committed to non-violence, he joined the National Cadet Corps. This, though, ended in failure after the argumentative Indian got the better of him in the face of a Subedar Major. More importantly, he recalls: “My advocacy of impatience, which, rightly or wrongly, became a central theme in my writings, was, I suppose, already beginning to take shape in those early days.”

Sen remembers the Winston Churchill-inflicted Bengal famine of 1943, which killed two to three million people and which he believes would not have happened had there been a free press, as opposed to a subservient British media, to expose the laxity. Also, the shock of the bloody descent to Partition as his family were united on the “total falsity” of the Muslim League’s two-nation theory.

Tagore’s evocative song “Amar Sonar Bangla” (My Golden Bengal) was scripted to successfully resist Viceroy Lord George Curzon’s 1905 division of Bengal into east and west. The irony is post-1971 the rendition became the national anthem of just a portion of a presidency that stretched to Assam. Sen admits, “A Bengali identity has always been important for me,” and suggests this is, as Tagore declared at an Oxford lecture in the early 1930s, a derivation of “a confluence of three cultures, Hindu, Mohammedan and British”.

When he moved to Calcutta to read economics with mathematics at Presidency College, he was quite attracted to the major metropolis. Reformers from Ram Mohun Roy in the nineteenth century to post-Independence intellectuals had made it a centre of cultural transformation. “By the middle of the twentieth century,” he observes, “this intellectual ferment in Calcutta had given the city a reputation that was hard to match.”

Arriving at Cambridge, he was asked by his landlady wary of having a non-white lodger: “Will your colour come off in the bath — I mean in a really hot bath?” He reassured her that his colour was “agreeably hardy and durable”. An intended two-year stay at Trinity College for a BA degree escalated into a decade-long stint embracing a PhD and Staff Fellowship. Thirty-five years later he was to return as Master — the first non-white head of a Cambridge college — during which period he was conferred the Nobel Prize in Economics.

Sen feels he is equally at home at the Cambridges in England and Massachusetts and his ancestral habitat in Santiniketan. His status as a transnationally applauded economist probably echoes a song Tagore had composed about himself: “The sky is full of the sun and the stars/ The universe is full of life/ Among all these I have found a place/ And in wonder and amazement I sing.”