Excerpt from Newlyweds by Mansi Choksi 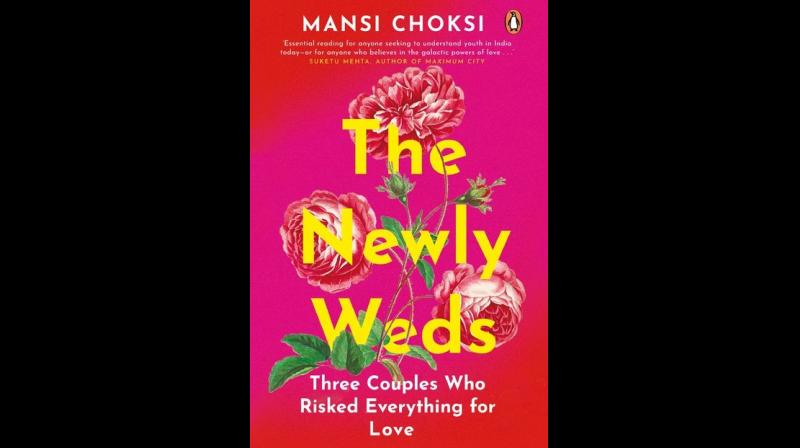 Cover photo of Newlyweds by Mansi Choksi. (Photo By Arrangement)

For most of my mother’s life, she has lived in the house she was born in. It is a roomy apartment on the second fl oor of a building with curving, dark stairs in an old part of Mumbai. Every afternoon, the sunlight presses through the stained glass windows of the corridor. Its big bedroom windows open into the canopies of trees. There is a powder-blue wall populated with old photographs of the city, and the drawers still sometimes reveal the belongings of people who spent part of their lives in this house, then moved on to go somewhere else. They include my great-grandparents, grandparents, uncles and aunts, cousins, my sister, and me.

When my mother was eighteen, she fell in love with a man and married him against her family’s wishes. After her eleven-year-long marriage crumbled, she returned to the house with two daughters. Even though she has lived in the same place for forty-eight years since, she carries an air of displacement everywhere she goes. She is always in a hurry. In a hurry to get somewhere. In a hurry to return. In a hurry to leave again. But to go where?

When I met the young couples whose stories make up this book, they were consumed with that same hurry. I met Neetu and Dawinder days after they had run away from their village and landed in the grip of a journalist-activist who promised to protect them.1 Weeks later, I met Monika and Arif when they were on the run from right-wing vigilantes. Finally, when I met Reshma and Preethi, a lesbian couple struggling to start their lives together in a town where they knew no one, I came to realise that the pursuit of love and its aftermath was ultimately a kind of displacement.

Two in every three Indians is under the age of thirty-fi ve. No other country has more young people. Yet we are torn about whether it is acceptable to be young and do the things young people do. If a survey asked us who we were or where we were going, we were expected to say that we are different from our parents because we look to the future and not to the past. Recently, such a survey was conducted, and it revealed that half our young people consider caste and religion to be the defi ning aspects of our identity. One-third of us believe that intercaste marriages will destroy Indian society. Half of us are completely opposed to interreligious marriage. Only one in seven of us approves of dating before marriage. Four in five of us married with permission from our parents, and less than 6 percent of us chose our own partners. Most of us think like our parents and conduct our lives based on the fear of disappointing them.

Marriage has a special place in Indian society. In many ways, it is the only intended outcome of growing up. It is an arrangement between two families belonging to the same warp and weft in the tapestry of religion, caste, class, clan, region, and language. The goal of marriage is to cement those boundaries to ensure the survival of power hierarchies because we are a society that places greater emphasis on collectivism than individualism. We derive our identities from the groups we belong to; our daily lives and our politics are arranged around them. When young people choose their own partners, we threaten order with chaos.
I wanted to know if love can endure with dignity if it becomes tainted with shame. I learned there is a great power in longing for love, but once we attain that love at the cost of moral injury, that space can become filled with a longing for acceptance.

Often when love is gained, it can start to feel unheroic. The process of reconciliation with our choices can be both beautiful and terrible. There is an expectation in Indian society that even if married life turns out to be hell, women will stay in the marriage and pray for the same partner for the next seven lifetimes. Our bodies are repositories of family honour, battlefi elds for political wars, and instruments for reproduction.

While reporting on the lives of these three couples, I often thought about why Indian society does not implode from the pressures of so many young people — especially young women — pushing against what we want and what we are expected to want. It also made me think about whether curiosity was really a trait that could be gained and then given up.

Neetu and Dawinder, Arif and Monika, and Reshma and Preethi grew up in villages and towns in different corners of the country, each of them internalizing a narrow spectrum of morality and an overwhelming sense of duty. They are exactly the kind of young Indians who are raised to resist the urge to surpass the boundaries of traditional Indian society. So, after they risk everything for the sake of love, they suddenly cannot recognize themselves. Each of them is tormented by one central question: Was it worth it?

Late one evening, when I went back to my mother’s home after spending the day reporting, I asked her if her decision to marry the man she fell in love with all those years earlier had been worth it. “I don’t know,” she answered.
We took our dinner plates to the television and sat down to watch a Hindi soap opera about another doomed romance.

Excerpted with permission from The Newlyweds (Penguin)