Review of Sanjeev Kumar: The Actor We All Loved By Reeta Ramamurthy Gupta and Uday Jariwala 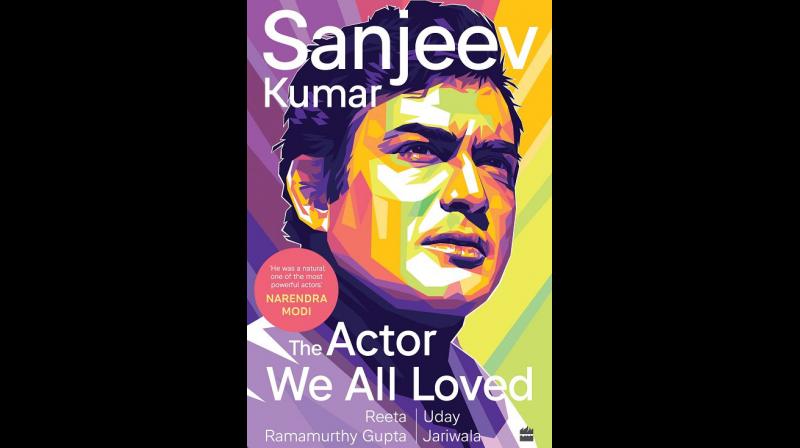 Cover photo of Sanjeev Kumar: The Actor We All Loved By Reeta Ramamurthy Gupta and Uday Jariwala (Photo By Arrangement)

Every generation needs or rather has its own heroes. However thespian someone might be, her or his footprints are certain to be wiped off from the sands of time.

People of my vintage may remember Sanjeev Kumar as the Thakur from Sholay or even the husband seeing another man openly flirting with his wife in the evergreen Holi number, “Rang Barse Bhige Chunarwali…”. But ask any Gen Z, “Who is Sanjeev Kumar?” and their only refuge will be Google.

Starting from Gujarati theatre Haribhai Jariwala became Sanjeev Kumar and then “the Sanjeev Kumar”, the actor nonpareil. Be it donning a simple kurta-pyjama or a well-tailored suit, Sanjeev was someone with whom the audience always connected. There was never a bad Sanjeev Kumar film. He truly was Sanjeev Kumar: The Actor We All Loved.

Biographers Reeta Ramamurthy Gupta and Uday Jariwala have painstakingly recreated the life arc of this actor. Sanjeev Kumar kept reinventing himself. He was never typecast. He got into the skin of the character he essayed. Be it the business tycoon R.K. Gupta in Trishul or Thakur in Sholay, he never shied away from playing second leads or non-glamorous characters.

The book does a wonderful job of reconstructing the entire personal life of Sanjeev Kumar. It tells us about his hardships, his struggle to make it big in the world of cinema, and his loneliness. As he himself remarks somewhere, “While Sanjeev Kumar has many friends, Harihar Jethalal Jariwala has none.”

The 357-page biography has been divided into eight sections with Section VI being the most interesting one. It has his friends and colleagues like veteran actresses Tanuja, Sharmila Tagore and Moushumi Chatterjee reminiscing about him. All sketches unanimously paint him as a sensitive person who lived life king size. In fact, it was his epicurean lifestyle that eventually took a toll on him.

However, a tad too much focus is on his personal life. According to the biography, he was linked with almost all the leading ladies of his time. Every other chapter deals with the women in his life. So much so that we end up knowing more about Sanjeev Kumar the person, rather than Sanjeev Kumar the actor.

Sadly, not much has been written about his acting process, which would be like a textbook in acting for today’s generation. What was his way of approaching a character, how did he select a movie, et al. Space devoted to Gulzar is inadequate compared to their association and the gems they produced. Also, missing are prominent voices like Jaya Bachchan with whom he had done three major movies. He plays her husband in Koshish, her parent in Parichay, and her father-in-law in Sholay. Indeed, fascinating and bold. He has also done Anamika and Naya Din Nayi Raat with her in which he created a record by playing nine different characters.

He was one of the few actors from the Hindi film industry who got a chance to work with legendary filmmaker Satyajit Ray in Shatranj Ke Khiladi. Though it finds a mention in the book, nothing much is elaborated upon. Sad.

An extremely charming actor who knew how to use his voice intelligently, Sanjeev Kumar owned the screen once he was on it. As timeless as Amitabh Bachchan and as versatile as Dilip Kumar, Sanjeev Kumar transformed himself into the character he was playing to the T.

There is a strange similarity one finds between Sanjeev Kumar and tragedienne Meena Kumari. Both were actors unparalleled, both were lonely in their personal lives, both were exceptionally devoted to their extended family’s welfare, and both were addicted to liquor which eventually led to their death. Needless to mention, both died very young.

Sanjeev debuted in the entertainment industry with a Gujarati movie, Ramat Ramade Ram, in 1963. His last movie, Professor Ki Padosan, was released in 1994, almost a decade after he passed away.  Someday, thanks to this biography, these three decades may eventually be turned into a riveting screenplay for a 10-part OTT series so that Sanjeev Kumar, the actor we all love, is never forgotten.