The uncle was a demagogue and a fiery orator. Raj too is a good orator, charismatic and aggressive while Uddhav is more reserved. 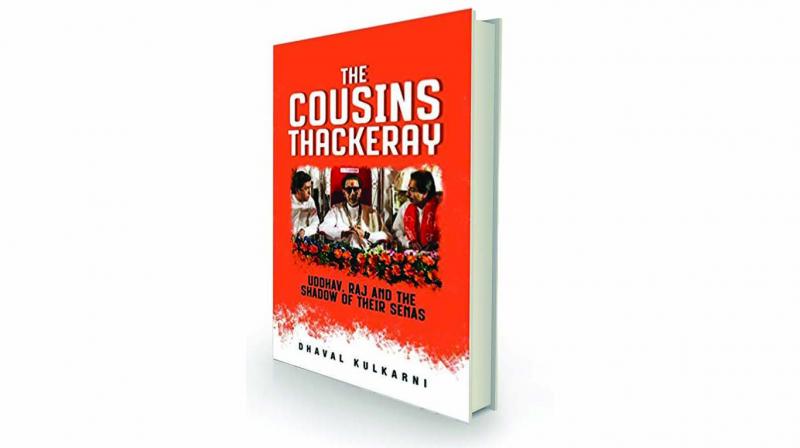 Families rule in India.  Politics is family business. Once the family expands it is inevitable that rivalries develop and there are fights between siblings, daughters-in-law and sons-in-law and in joint families between cousins. Journalist Dhaval Kulkarni gives an account of the fallout between cousins Uddhav (born 1961) , son of the founder of Shiv Sena Bal Thackeray and his nephew Raj Thackeray (born 1968).

The uncle was a demagogue and a fiery orator. Raj too is a good orator, charismatic and aggressive while Uddhav is more reserved. Raj a good mimic is supposed to have modelled himself after his uncle. It was expected that with the flamboyance with which Raj entered the family business and his uncle’s overt affection for him ,he would take over the top position after Balasaheb. But that was not to be. Uddhav slowly and steadily consolidated his position and his father handed over the party to him.

Kulkarni gives an account of  the rise and fall of Raj and the rise and rise of Uddhav. Neither were willing to talk to him. The narrative therefore relies on the author’s own experience in reporting  on Shiv Sena and MNS and the two cousins. He has talked to senior journalists, political analysts, friends of Raj and Uddhav  and family members.

Shiv Sena was founded by Balasaheb Thackeray in 1966.  Bal Thackeray’s  father Probhodhankar Keshav Sitaram Thackeray was an orator, writer, poet, artist and an intellectual spearheading the anti-Brahmin movement in Maharashtra. He  gave the party its name. Shiv Sena was formed to build a movement to ensure that job opportunities in Mumbai go to Marathi job aspirants. It touched the core of the Maharashtrian heart and has grown into a strong regional party.  It is also a party which believes in divisive politics and violent methods to prove its point. The larger parties in the state have used Shiv Sena to instigate and quell violence whenever it has suited them.

The story starts when Raj rises like a comet from the late 1980s  and Uddhav remains low key and works behind the scenes.  Raj  was getting associated with Bharatiya Vidyarthi Sena (BVS), Shiv Sena’s  youth wing and was made its President in 1988 marking his entry into politics. It was seen as the right move to attract youth to the party.

While Raj was addressing meetings and building his network and following the violent path of Shiv Sena like digging up cricket stadiums and spewing venom on outsiders, not all party members were happy. Many considered him high handed. His close associate being accused in the Ramesh Kini murder case did not help his reputation or image.

The rivalry between Uddhav and Raj was coming into the open.  The patriarch’s health was failing. He had lost his wife and his elder son one after the other and Balasaheb was beginning to rely more and more on Uddhav who was working behind the scenes and was not as visible as Raj. Party members and supporters started taking sides and playing games.

Uddhav was appointed executive president of the party in 2003. Narayan Rane the powerful Shiv Sena leader and Raj Thackeray left the the party in 2005. Raj launched his party  Maharashtra Navnirman Sena ( MNS ) in 2006. At that time it was widely believed that this was the end of Shiv Sena. The passing away of Bal Thackeray in 2012 strengthened this feeling. MNS also doing well electorally before it started caving in.

As it happened, Shiv Sena did not fade and Uddhav Thackeray has emerged a strong leader and is waiting to make his 29-year-old son Aaditya Thackeray the chief Minister of Maharashtra. Raj has been all sound and fury signifying nothing. He is described as all bluster and no action. However nobody is writing Raj off. People seem to like him in spite of his repeated failures.

Most of these events from the 1980s to now form the major part of the book. Unfortunately, it tries to cover too many things in these pages. Shiv Sena’s dalliance with other parties for electoral alliances, its relationship with BJP in the last 30 years, leadership struggles have all been packed in the dense narrative. A reader not so familiar with Maharashtra and its politics has to wade through a bewildering array of people events and dates. Cousins Raj and Uddhav sometimes disappear in this information onslaught. Not much is mentioned about the family dynamics and alignments.

In conclusion the author summarises the cousins’ personalities. “One is abrasive,  a fire breathing demagogue, who is blunt to the point of being arrogant, but remains one of the most popular crowd-pullers in Maharashtra despite a string of electoral reverses, the other is an introvert, soft-spoken, an enigma for many associates, and with his penchant for boardroom strategies, seems to be out of character for his rough and tumble party, which dominates the streets of India’s financial capital thanks to its muscle”.

It is possible to glean some nuggets from Cousins Thackeray. The Thackeray family’s origins can be traced to Bihar according Balasaheb’s father Prabhodhankar. The irony cannot be missed considering that  both Shiv Sena’s and MNS’s are virulently anti-North Indian, anti Bihari.

The writer is a senior journalist and author of Surge: Tamil Nadu’s Growth Story. She is now consulting editor for the Financial Express.