Extract from Gangster on the Run 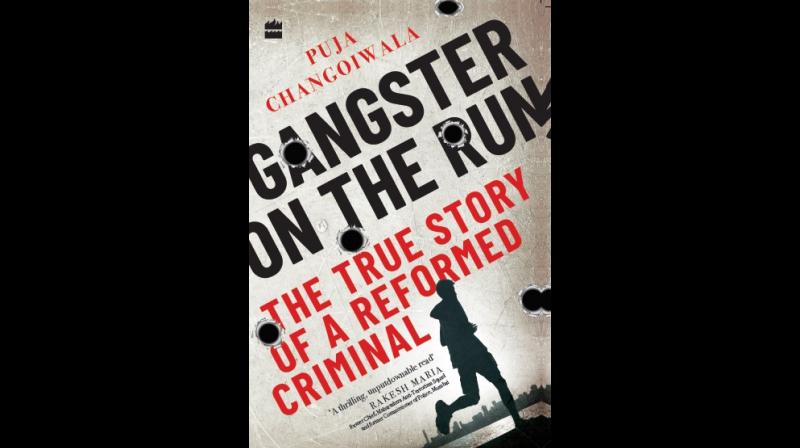 Gangster on the Run

As ten-year-old Rahul shut his eyes before he blew the candles on his fresh, home-baked birthday cake, he saw his best friend’s smiling face, how her eyes lit up when she jumped into a puddle of muck. The boy smiled too, and made his birthday wish — he wished to see her again. His birthday song echoed in the room as he quickly sliced the chocolate cake into uneven pieces. Soon, with no heed to his favourite samosas or mango drink, he walked out of his home, looking for the horizon.

While he was growing up, Rahul had heard countless stories about a creek near his home in Dombivli, a city on the outskirts of Mumbai. Flamingos would visit the rivulet, delicious tamarind and gooseberries abundant along its shore, and local trains would disappear into its majestic mountains. Although the air tasted salty from the heaps of garbage dumped into the backwater, the sky here was the purest blue — blue as the southern sea.

‘Take me there, maa,’ the child would tell his mother.

Each time, his request was shunned with, ‘There’s a demon in that creek, who feeds off young boys. As soon as he spots a kid, the waters swallow him up. Don’t you dare go anywhere close.’

Rahul’s parents were reasonable in designing the phantasms. The creek was a secluded, marshy wasteland, where local addicts indulged in gambling, hooch and homegrown marijuana. To the young boy, the forbiddance made the illusive inlet more attractive. Unaware of the creek’s location, he would walk by the gutter under his building, following its course, hoping it would eventually merge with the bay and take him with it. On one such expedition, eight months before his tenth birthday, he met Dina Lohar, his first best friend.

Dina was six years older than Rahul, but she was unlike any of the elders the boy had known – while his parents and siblings admonished him when he jumped into the gutter, Dina jumped in with him. While they had barred his visit to the creek, Dina took him to it. Every afternoon, after he returned from school, Rahul would cross the road outside his building, and disappear into a tiny forest, where Dina lived. She would wait for him by a well near her hut. As soon as he arrived, the two would walk one and a half kilometres to get to the stream. Rahul particularly loved their journey through a bamboo forest – dense and isolated, with rustling leaves playing a soothing symphony in their welcome. He would feel at peace in that jungle, as if he were finally home.

The children would bathe in the still, dirty waters of the rivulet, and build muck castles ashore. They would catch ‘long-tailed fish’, which were in fact tadpoles, and Rahul would put them in a small tank at home. Over a few weeks, the ‘fish’ would turn into frogs, and the boy would be ecstatic. ‘Magic!’ he’d exclaim each time he witnessed the metamorphosis. The world is a wizard, or maybe it’s my best friend, Dina.

While at the creek, if the two grew hungry, they would walk to a tiny temple nearby, and feast on the coconut offerings left for the deity. The shrine lay isolated on most days. When the priest was around — an old man with a kind face — he would give them milk cakes. The two would savour the treat and return home, content.

As days melted into months, Rahul realised Dina had never been to school. She was skinny because she did not have enough to eat. She would wear the same pair of salwar kameez every day because she did not have other clothes. Belonging to a tribal family, her migrant parents worked as labourers, who could not afford the luxury of education or regular meals for their three children. She, too, was forbidden from visiting the creek, he learnt – and their association soon became a cherished secret affair.

On his tenth birthday, Rahul’s father returned from work with the boy’s favourite Indian sweet, gulabjamun. Friends and neighbours had gathered at his home to celebrate his special day, but Rahul packed four of the treats in a plastic bag and told his mother he would return soon. He crossed the road, and rushed towards Dina’s hut. She was by the well as usual, looking deep into its bottomless waters. He’d always wondered what she’d stare at inside that well. He had even asked her a few times, but being Dina, she had always brushed the query aside with a story about a new bird she’d spotted or a colourful insect that had entered her hut.

‘It’s my birthday, Didi,’ Rahul spoke to her back, beaming. ‘Here, look what I got for you. They’re my favourite.’

Dina turned around and hugged him. Her brown, sunken cheeks wet with tears, she was trembling. She wasn’t shivering, no. She was trembling, as if it were freezing, as if she couldn’t breathe. Within seconds, she broke the embrace, climbed onto the well’s side-rail, and jumped.

Splash. Rahul heard her hit the water. Splash and silence. Silence so dark, so dark. 4

As locals rushed over in reaction to the sound, the boy, without turning around, began to retreat. He ran towards the temple near the creek. At a distance, he could hear the quiet turn into wailing. Too shocked for tears, he kept running as fast as he could, away from that conundrum, towards his friend. The boy had heard that when people die, they go to the gods. His mother had told him that. Dina, he was certain, was at the temple.

‘Come here, child,’ the priest, dressed in a white dhoti, said and asked Rahul to sit on his lap. ‘Tell me what happened.’

‘She jumped into the well. She died. She must come here now. Any minute, any minute.’

‘She won’t come here, boy,’ the priest explained. ‘Here, have some water, catch your breath.’

‘I don’t want water. Do you know where I can find her?’

‘You cannot find her, child. When people die, they go to the horizon – where the sky meets the sea, where the sun never sets. She’s there, too far.’

Tears now welling up in his eyes, Rahul jumped off the priest’s lap, and started running home. As his parents admonished him for making guests wait, he walked to the sponge cake and sliced it. He then turned to his school bag, took out the twenty rupees his father had given him that morning, and left.

A boy, who lost his innocence to the Mumbai mafia; a painter, who lost his art to the 9 mm pistol; a dreamer, who lost his ambition to cheap whisky; a romantic, who lost his love to dimly lit bars and brothels; and a son who lost his ideals to hard cash – this is the story of Rahul Ramakant Jadhav — a gangster, a gunrunner, a sharpshooter, an alcoholic, a de-addiction crusader and an ultramarathoner. A saga of grime and grit, it starts in one of the darkest phases of post-Independence India, when democracy was hijacked, left reeling under Prime Minister Indira Gandhi’s Emergency.

Rahul was born on 11 February, 1976, during the twenty-one-month state of Emergency. The historic chaos, however, hardly affected life in his sleepy, unimportant town of Dombivli, sixty kilometres northeast of Bombay. No enemies of Mrs Gandhi were being jailed here — the first prison in the district was only under construction at the time. There were no newspaper presses to have their electricity lines disconnected. No one came looking for anti-government propagandists or to impose ‘graveyard discipline’, and no one bothered with strikes, marches or riots. It was as if the world was oblivious to this city, until Rahul dragged its name to the news headlines.

Rahul’s seventy-two-year-old mother, Shalini, vouches for the accord in her city during the Emergency, when she was to deliver her third child. ‘No, they did not come after us to neuter my husband. Yes, we had easy access to public transport. No, we were not arbitrarily detained. In fact, it was a peaceful time. Buses had never been as punctual.’

Dombivli, now the biggest middle-class township in the Mumbai Metropolitan Region, derives its name from its first inhabitants — the ‘Dombs’, who conduct cremation rites at funeral pyres. Although the city is now a dormitory town, which works hard to keep the country’s financial capital breathing, it was not the same in the 1970s. The wooded commune had a population of 51,108 then, as opposed to its current 1.2 million. The land was rough and rocky, water was scarce, and wolves and foxes roamed the wilderness within the metropolis.

‘As I said, peaceful,’ the arthritic septuagenarian asserts, lying with her eyes shut on the only cot in her 150-square-foot home, the same one where the underworld hitman was born.

Gangster on the Run (pp. 283, Rs 399), releasing September 19, chronicles the story of Rahul Jadhav, a prominent gangster from the Mumbai underworld, his struggles with the bottle and his transformation into an ultramarathoner. This extract has been published with permission from HarperCollins India.