Tracing the rapid rise and speedy fall of Bhutto

Reading this book one cannot help thinking that Bhutto was probably his own worst enemy. 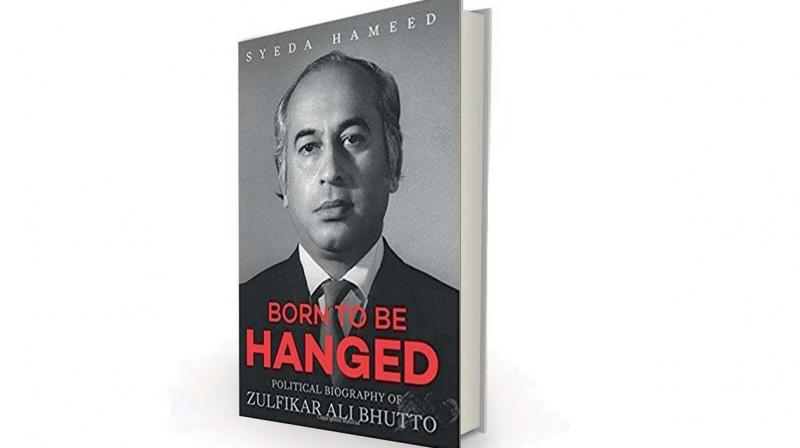 At a moment when all matters related to Pakistan appear to be combustible, it was interesting to read a book about a former Pakistani Prime Minister, Zufliqar Ali Bhutto. Especially as the author Syeda Hameed, an erstwhile member of the Planning Commission, writes about him with sympathy and even admiration. This is in short supply for most politicians, and thus the book draws you into reading it.

According to Hameed, the “extraordinary” Bhutto was as tragic a figure as Oedipus. Both cruelly doomed by destiny. She goes onto remorsefully trace Bhutto’s rise and fall, drawing parallels wherever possible between the both.

The book therefore raises the intriguing question whether Bhutto’s fate was sealed from the day he was born? For many readers this may not be obvious, as he grew up in a rich, feudal family. He need not have chosen politics and he certainly was not a martyr. In fact, right till his humiliating last few days he did not believe he would die. Intelligent, suave, good looking and a confident orator, he appeared to believe, despite the changed circumstances, that he was born to rule, not born to be hanged.

His rapid rise and speedy death came possibly because he had many inherent failings (some of which are enumerated in the book) — and like other politicians, he too fell prey to hubris. In any other country this may have just meant that he would be kicked out of power — but in Pakistan where the Army rules with an iron fist, it could only mean death. A political assassination, cleverly plotted by his successor, General Zia Ul Haq. This was the same Zia whom Bhutto had once called a “dog”, and who apparently cleaned Bhutto’s shoes when tea accidentally spilt onto them. Bhutto claimed that he had selected Zia to lead the Army only because the US had said he (Zia) was a “useless fellow”.

But reading this book (even if it is written with delicate admiration) one cannot help thinking that Bhutto was probably his own worst enemy. While he was at the top of his career, he became increasingly insecure. Isolated and lonely at the end, he became a victim of his own secret service. Yet, he continued to believe in his righteousness, and political power. He inflicted humiliation and jail terms upon those he suspected of disloyalty — and many close associates were expelled from the party (the People’s Party of Pakistan) he had launched. And finally, he was set up in a court case, accused of attempting to have a political rival murdered

Not Oedipus — but perhaps in his self-belief he was more akin to a woman Prime Minister across the border — Indira Gandhi, as they were both of the same vintage. Both were killed — one by the state and the other by her own bodyguards. Both their children, former Prime Ministers, also died in ghastly bomb explosions on the eve of a possible re-election.

And now their grandchildren are attempting to take the family baton forward. Yes, Indira Gandhi and Zulfiqar Ali Bhutto had a lot in common. Hameed, however, does not compare Bhutto with Gandhi — and the book is largely based on interviews she conducted with one of Bhutto’s long time associates, and co founder of PPP — Dr Mubashir Hasan.

A complex figure, Bhutto had as many admirers as enemies, perhaps. Some might accuse him of losing East Pakistan by badly handling an electoral debacle, and others would say that he was remarkably cruel to those who were close to him. Still others might denigrate him saying he was a little too fond of wine and women.

But Hameed puts him, wherever possible, on a higher plane: beginning her narrative from when he made an impact on the world stage, creating a sensation at the UN speaking about Kashmir, and a 1000 year war with India. His exuberance and loquaciousness made him into an instant hero in Pakistan. “His political agenda based on Islamic faith, democratic polity, socialist economy, and confrontation with India made him beloved of Pakistani masses,” writes Hameed.

Bhutto creates a new economic policy for Pakistan as he leaps into socialism. One of his first acts as President was to nationalise the banks (another penchant he would share with the lady PM across the border).

The style of the book is anecdotal, giving different aspects of the man — even focussing on how Bhutto tried to weed out corruption in Pakistan. Yet ironically, and contrarily, the book also documents how Bhutto bribed someone to bring him a “bottle” while in jail. Though Bhutto felt that he got the “bottle” because of the bribe he had given, it had actually been provided by the state because the man was a government agent, kept close to Bhutto in jail to spy on him.

While the book has some excellent information to share with us — the one problem is that it moves frequently back and forth in time. Sometimes the context is missing — possibly because it is largely based on the conversation the author had conducted with Mubashir Hasan. Thus the reader may have to do some research while reading. But overall, the book is welcome as it reminds us that we require more and more biographies of political leaders from South Asia, from differing points of view — especially in the words of those who had a chance to know them.

Kishwar Desai is an award-winning author