Voices that must be heard!

I want our voice to be heard as strong women who demand justice in this inhuman social structure,” she signs off. 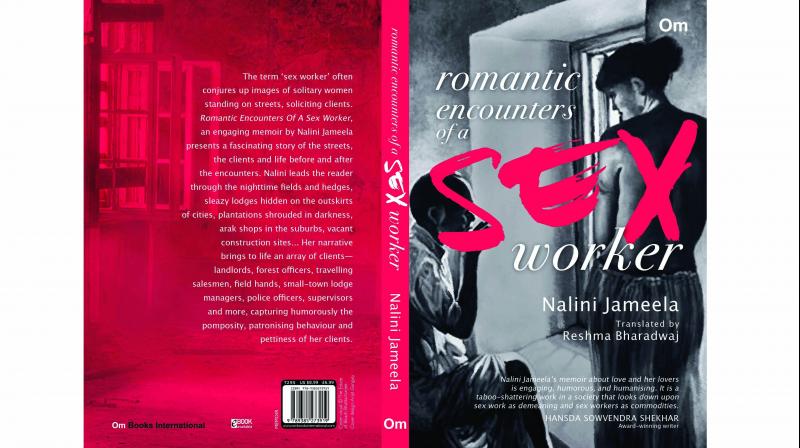 Starting off with a brief introduction it can be said that the term ‘sex worker’ often conjures up images of solitary women standing on streets, soliciting clients. Contradicting this, Romantic Encounters Of A Sex Worker, an engaging memoir by author, activist and sex worker, Nalini Jameela, presents a fascinating story of the streets, the clients and life before and after the encounters.

“The book is about my life as a sex worker and the clients whom  I had intimate relationships with. It is also about my life on the streets as a single working woman whose work was stigmatised so much that we almost acquired the tag of a criminal,” says Nalini Jameela.

“Usually there is a one-sided depiction of sex workers with stereotypical images like a person lurking in the dark alleys, running away from the law and the society, having fleeting relationships, having no friends etc. And the images of clients oscillate between cruel exploitative monsters or poor seduced mortals. I wanted to write something which evades such image traps,” she says.

In  early 2000, she was the president of Sex Workers’ Forum of Kerala (SWFK). It was a period when SWFK was very active. She recalls, “They held protest marches to bring attention to the atrocities faced by street-based sex workers at the hands of police and goons; large public meetings and conferences were organised to explain their politics. At that point of time the political sphere of Kerala was not yet ready to accept such a movement. The atrocities suffered by sex workers at the hands of police and goons was legitimised by the moral codes of Kerala which condemned the very existence of sex workers.”

Weaving a book on the hardships faced by sex workers, Nalini shares, “All my writings are about sex workers’ lives and I want it to be part of our resistance against mainstream politics that marginalises us.  I want our voice to be heard as strong women who demand justice in this inhuman social structure,” she signs off.