The trouble is that India has never really known how to address poverty by delivering quality education to the poor. 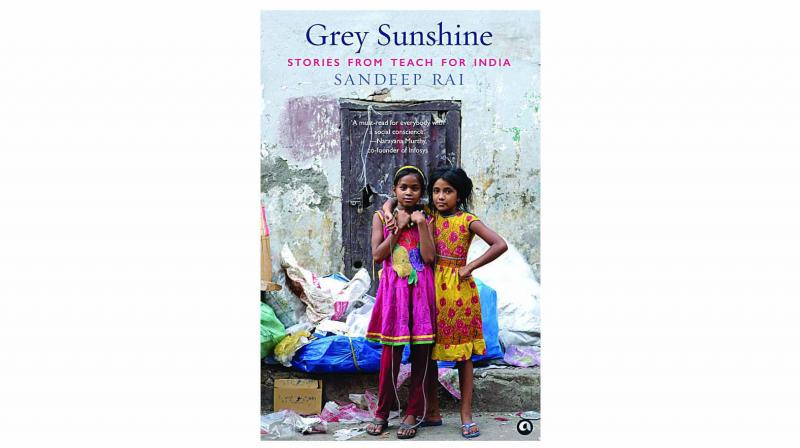 You will never feel the same after reading this book. The blurb by Narayan Murthy says that “it’s a must-read for all those with a social conscience”. Perhaps it is more important for people without a social conscience to read it, as they will be shaken out of their complacence when they are confronted with the plight of most of India’s children. This book will convince all that the only way to extricate these children out of a relentless poverty cycle is to give them access to quality education.

Grey Sunshine by Sandeep Rai comprises stories from “Teach for India”. These stories tell the reader about the lives of hundreds of thousands of children who represent the dismal statistics of India’s education. In other words, they tell the shameful story of India’s inequity. However, the stories are not only about the all-pervading greyness but also about sunshine penetrating the grey clouds because of the heroic efforts of Teach for India Fellows who work tirelessly to make amends for the dismal Indian education “system”. The author himself is the chief of city operations of TFI and has played a significant role in widening and strengthening the TFI movement.

The book is divided into three parts. The first part gives a first-hand glimpse into the lives of three children who live in abject poverty. The heart-rending stories of their trials and tribulations are also those of millions of other children like them. The next two parts tell the story of four young people who gave up comfortable lives to join the TFI movement. The founder of this movement, Shireen Mistri, gave up her seat in Tufts University, in order to work for India’s children. It was certainly not easy for Shireen or for other young men and women to convince their bewildered parents about choosing a rough and uncertain path over promising careers. Currently, there are 4,000 TFI Fellows who form just a microscopic drop of succour in the vast ocean of India’s uneducated children. This is “India’s most pressing crisis” — which Rai fervently hopes will be addressed by each and every Indian in the role that he or she deems fit.

The statistics are stupefying. This is the 21st century but life expectancy in Govandi (Maharashtra) is 39 years. Fifty seven per cent of the children are malnourished. Shivajinagar in the M- East Ward of Mumbai, houses 6,00,000 people who are so tightly packed that each person has “the space of a double-door fridge”. In addition to these appalling conditions, Govandi has to cope with violence, murder, drug dealing and rape. Ironically, clusters of families are kept safe by local gangsters.

After being exposed to these dark stories of India’s children it is but natural for the reader to feel angry while reading the chapter entitled “The Cards of Privilege” which describes the attitude of the privileged schools who have reluctantly accommodated some “RTE” children in their hallowed precincts. We realise with a shock that something “analogous to apartheid” exists in India —indeed it is a powerful hydra-headed monster that poor, helpless children are being subjected to all the time in the form of multiple biases and prejudices. According to Rai, the opposition to Section 12(1)c of the RTE Act is mainly because the privileged class is uncomfortable with diversity and inclusiveness. The horrifying story of Deepak will haunt the reader for a long time. Five-year old Deepak happened to relieve himself in class and the school made his mother come to the classroom to clean up the mess and suspended him for two days.  The question is, “would they have behaved like this with their 'regular admission' children and parents?”

Through all this, the passion and perseverance of the TFI teachers glows strong and bright. Nalika realises that accolades for her creative teaching were not enough — she had to bring out the best in each and every child in her class and encourage their diverse interests. Tarun’s story is amazing. He gave up a coveted job at Hindustan Unilever Limited to fight for his dream “for a changed nation”.  Asif’s is a TFI success story. He was a pinpoint of light in Luhianagar, being its only child to go to college abroad. Nandini’s story is equally inspiring. She was left by her mother in an orphanage and now she is studying in Franklin & Marshall College, Philadelphia. “They deserve to dream too!” say the TFI leaders and Fellows.

The trouble is that India has never really known how to address poverty by delivering quality education to the poor. Bureaucrats who make policies have little field experience and everyone wishes to work on policy and not on the ground. Our school system is obsolete yet crores and crores of rupees are given as donations to private schools. All these years India has been busy with “inputs” — with school buildings, rather than what has been going on inside them. Outcomes have never been taken cognizance of, so when they are measured now, we are appalled by the findings.

Thankfully, the book ends on a note of hope. The concluding chapter mentions five things to focus on “to get the sun to shine on all of India’s children”. Do read Grey Sunshine if you care about a more equitable India.

The writer is a veteran school educator based in Kolkata