A devil’s advocate who speaks to power

Karan Thapar’s book impresses that there once was a journalist who dared to speak to authority. 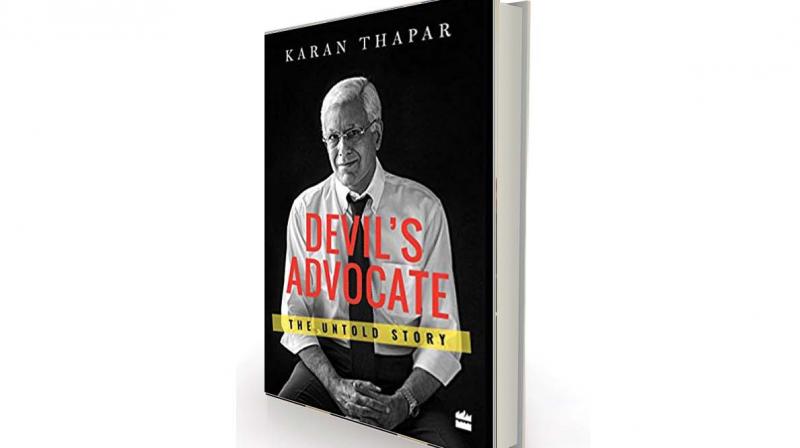 Neither does Karan Thapar dwell long to take credit for his pioneering role as a TV journalist who introduced several innovations to Indian TV news from the British media, where he was rising as a star when India beckoned, nor does he under-project his family background or try to hide an elitist start to life, lest they serve as a platform to attack him for bias in his career. Oblivious to the fusillades of hatred from the troll armies, or barbs likely from quarters closer, Thapar speaks his mind out, for neither is he writing a memoir with calculations of image correction, nor as a harsh mediaperson quipped — “is this your 200-page resume applying for a rehabilitation of a job to the Congress Party?”. It is an angry outburst of a screed when he feels being cornered into silence.

Dictating his book to his beloved assistant, Santosh (I chuckled thinking the last book I had read where the author had dictated the entire work to a steno and was the Mahabharata), the author lives up to the honesty and answerability of the standards he expected of guests on his shows. He reveals almost as if being shadowed by his fierce alter-self with questions to corner guests at every line, and satisfies the test of truth, transparency and where he breaks notions or values expected of his tribe, like the sacred law of omerta where scribes follow with sources. He is direct, intrepid and argumentatively boisterous enough to become endearing.

His creed and value-system seldom seems to have digressed, changed or evolved: he loves attention and was always willing to exploit any dimension of reality to get it. If a sunflower thrives in sunlight, Thapar, at whom life seems to have thrown very few bad lemons, sought, and got, perpetual limelight.

Born in an aristocratic Thapar family, his father served as India’s Chief of Army Staff during one of the country’s most difficult times, the Indo-China war of 1962, and subsequently as a diplomat, and named serendipitously after the royal scion-turned-politician, Karan Singh. Thapar quickly completes his childhood story — packed off to Doon School by a stern mother, then to Stowe, then Cambridge and Oxford, without much of nostalgia, or a reflect fury a la Catcher in the Rye. From what he almost nonchalantly dubs, “my unexpected arrival”, his father was almost 50 years when Karan was born, loved by his sisters, to his family’s close relationship with the then India’s first family, the Gandhi-Nehrus, with casualness, neither boastful nor apologetic.

He has early friendships with Sanjay Gandhi, a political scion brat impressing a young diplo-brat with daredevil aerial acrobatics and vehicular stunts, and a little more formal access to Rajiv Gandhi, who would later as Prime Minister play a role in bringing Karan back to India to help develop TV news in the country years later. Between the two Gandhi brothers, he takes us through his British college years, where he barely hides an infatuation for Benazir Bhutto, and explains how he built a strong bond with Aung San Suu Kyi, three of whom he would go on to interview, the three who headed a country each.

He falls in love with England too, and transforms into an unabashed Anglophile. Almost an archaically Nirad babu types, and with little more than an instinct to lead, he dumps economics for journalism and starts his career in the UK, where a start in print helps him learn the tricks but was almost waiting for his real arena to unfold, and embrace him as much as he embraces it — becoming the relentless intelligent inquisitor of the idiot box.

Karan Thapar understands pace; each second on TV has a premium, and he maintains it. How he bagged interviews with Prime Ministers P.V. Narasimha Rao, Chandra Sekhar, V.P. Singh and Atal Behari Vajpayee, and the tales behind his interactions, famous interviews, what went wrong, how they reacted to him are all revealed without ado.

The more controversial stories, earning the wrath, and a verbal spanking from Ram Jethmalani, the acrimony of an infamous interview with Jayalalithaa, and the tension as they were recording it, as well as the impromptu improvisation of a coup on Amitabh Bachchan about affairs with fellow heroines in front of his family, or pushing Kapil Dev to emotional turmoil, and tears, and keeping him there for as long as the interview lasted — he reveals with a candor rare for any memoir; intrepid, and quite frankly, in the manner of a Rhett Butler in Gone with the Wind, “Frankly, my dear, I don’t give a damn”.

The one touching story in the book, and perhaps a tragedy from which man-boy never grew up after from, was the beautiful love he found, and married, and lost — his wife Nisha. For an indulgent sophomore who jokes he loved it that British boys thronged to his first debate at Pembroke, Cambridge, possibly mistaking Karan to be a girl Karen, or says he was told he “looked gay”, or the one who asked the young and single Ms Bhutto, president of the rival student union, “Madam, you are proposing sex before marriage… would you care to practice what you preach?”, he confesses — “She loved both the child and adult in me. I will never find someone who could love me like that again.” So he remains single. Unexpectedly, I felt my eyes moist on those few pages.

Then Narendra Modi takes centrestage. The interview he walks out of, the promise of continued friendship from a man who would go on to become a Prime Minister, the one who would never give Thapar an interview, and after a while, ensured his party spokespersons started boycotting his show. The irony is bizarre: a kind of journalist who cemented a national narrative that made a rapidly rising political party an untouchable returns the gift; and a journalist born into privilege and access, is turned pariah.

Without any remorse, the book reveals towards the end as to how and why Thapar broke the trust of Sambit Patra or Pavan Varma, about how and why the BJP was boycotting him at the behest of Mr Modi, who even tells Prashant Kishor, “…he will take his revenge”.

At the end of the book, I felt as most readers would also feel, that Karan Thapar brought a stern quality evocative of British democracy to our media, where politicians submitted to dissent-packed questioning. He was a pioneer, and a rare breed of a person; part Victorian, part Elizabethian. But above all, his book impresses that there once was a journalist who dared to speak to authority. In an age where TV anchors easily slip into the roleplay of a God, or a judge, or both, we realise and cherish the value of a devil’s advocate.

Sriram Karri is the author of the bestselling MAN Asian Literary prize longlisted novel, Autobiography of a Mad Nation, and the  non-fiction, The Spiritual Supermarket.