Zehra writes, had not factored in the “critical problems of logistical stretch.” 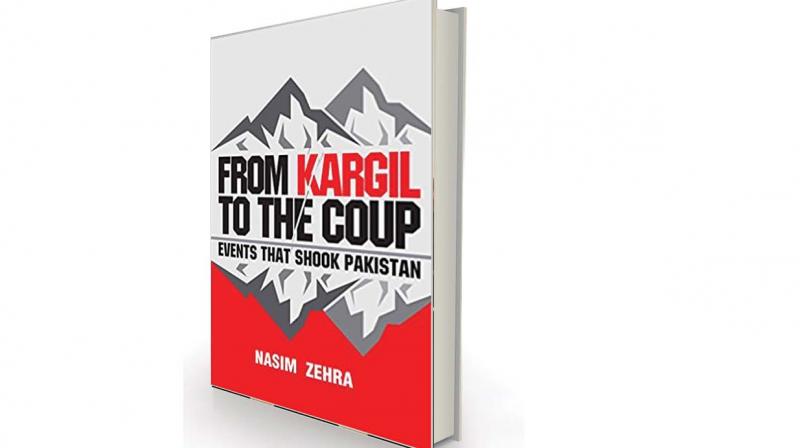 From Kargil to the Coup: Events that shook Pakistan by Nasim Zehra, Sang-e-Meel Publications, Rs 2,283

At the height of the Kargil crisis in June 1999, Nasim Zehra was one of a handful of journalists who accompanied Pakistan’s foreign minister Sartaj Aziz when he travelled to Delhi for talks with India’s foreign minister Jaswant Singh and then Prime Minister Atal Behari Vajpayee, where the Indian government made it plain that Pakistan must withdraw its troops or face a full-scale retaliation by the Indian Army.

In her recently released book, From Kargil to the Coup: Events That Shook Pakistan, Zehra does what few in Pakistan have had the courage to do — nail the lie that the Pakistan Army attempted to perpetuate to the world some 20 years ago: that it was not behind the hare-brained scheme to capture the Kargil heights.

To my mind, while the book is extremely well-researched, especially when recounting the role played by the Clinton administration in getting India and Pakistan to walk back from the nuclear brink, Zehra has been braver still in nailing the other, equally damaging half-lie that has continued to haunt former Prime Minister Nawaz Sharif: that he was fully and completely on board right from the start and worked closely with Kargil mastermind, Gen. Pervez Musharraf, on the undeclared war.

In a dangerously post-nuclear subcontinent, the crossing by Pakistan troops of the Line of Control into India through April 1999, could have easily led to a cataclysmic conflagration that could have annihilated both countries. Of all the ill-conceived wars between these two neighbours in their often brutal 71-year old history, Gen. Musharraf’s Kargil misadventure must rank as the most foolhardy.

As Zehra says in this eye-popping tell-all, the briefing by director-general, military operations, Lt. Gen. Tauqir Zia to Mr Sharif on May 17, 1999, well after Pakistani troops, posing as mujahideen had occupied the heights, was kept deliberately ambiguous even by military standards.

Clearly leavened with huge doses of flattery, it was also meant to give Mr Sharif very little room to manoeuvre. Presented with a fait accompli, the Pakistan Army cleverly fed him a back story — that this was not just payback for the Indian Army’s occupation of Siachen, but also the re-taking of Kashmir through fair means and foul. To everyone else outside that circle — especially a shocked Sartaj Aziz and the minister for Kashmir Majeed Malik — it was military hubris by a general who lacked the tactical ability to think beyond the immediate. As Zehra notes and as is pretty well known, it was a plan that Gen. Musharraf had even presented to Benazir Bhutto when she had taken over as Prime Minister. Only, she had the sense to shoot it down.

Zehra’s book lays the blame for Kargil, and rightly so, at Gen. Musharraf’s door. But to my mind, for Mr Sharif to endorse an infraction that had happened without his knowledge, but under his watch, is the real story of the book.

As Zehra recounts in one of the book’s most riveting chapters, Lt. Gen. Tauqir Zia tells Mr Sharif: “Sir, as per your desire, we have made a plan to upgrade the freedom movement in Kashmir.” It fed into Mr Sharif’s pride — a Kashmiri native brought up in Lahore — that it would be under his prime ministerial watch that Pakistan would wrest Kashmir away from India, even if it meant breaking with the Lahore Declaration that he had signed with Vajpayee.

“It would be a five-phased operation and the first phase has been completed,” he explained. He then proceeded to show on the map scores of positions that had already been taken. However, military maps without any text were used for the briefing. Nothing was written and they only had symbols on them. Normally, even military men receiving briefings on such maps, with only symbols, first require orientation to understand what these maps represent. For example, the LoC was not clearly demarcated on the map. Hence, during the presentation, when Pakistani and Indian positions were pointed out to Prime Minister Sharif, he was unable to fully comprehend the locations of these posts. Instead, for him, the main focus of the briefing was the achievements of the Pakistani troops. There was no mention of Pakistani troops crossing the LoC, nor of the Pakistani troop build-up 5 to 10 km beyond the LoC.

As Zehra tells it: “Sartaj Aziz pointedly asked his PM whether the plan, that the Army had made, was not contrary to the undertaking in the Lahore Declaration.” “Sartaj Aziz Sahib, can we ever take Kashmir through paperwork? We have here an opportunity to take Kashmir,” was a relaxed Mr Sharif’s response. By contrast, his foreign minister was perturbed. He was clear that this operation would not help Pakistan get international support for Kashmir. The other obviously perturbed man in the room was Mr Sharif’s minister for Kashmir and northern areas, Majeed Malik. A retired general, Malik grilled the Commander 10 Corps about the logistics for the forward troops. He questioned how supplies would reach troops under “adverse weather conditions and in a hostile environment”. He recalled the hazardous terrain he had personally visited.

“Lt. Gen. Mahmud’s curt response was that times had changed, that ‘our troops are fully covered’.”

“The retired general also asked the DGMO, ‘What if the Indians do not remove their troops from the Valley and instead induct air power in the conflict theatre?’ Meanwhile, the silent worrier in the room, Mr Sharif’s defence secretary, also a retired general, opted to not raise any questions. At the conclusion of the formal meeting, he merely whispered to other military officers, ‘The foreign office will never be able to handle this’.”

“There were glaring flaws in both the planning and execution of the so-called Operation Koh Paima or Operation KP as it came to be called in Pakistan,” Zehra says. The troops — and not the shepherds and mujahideen that the Pakistan Army said were behind the operation — were trapped in high-altitude dugouts, with no food or water, surviving on grass as Indian soldiers retook the heights and forced a surrender. Gen. Musharraf and his Kargil clique’s flawed strategy,

Zehra writes, had not factored in the “critical problems of logistical stretch.”

In the end, though, while Mr Sharif may have been presented with a fait accompli, the question of why, as Prime Minister, Nawaz Sharif did not call Gen. Musharraf’s bluff and call back the troops goes to the heart of the systemic failure and the inability of one civilian government after another to tackle the Pakistan military’s overreach.

On Kargil — and the coup that was to come when Gen. Musharraf finally overthrew Mr Sharif — Zehra had access to the Army’s top brass, including former Chief of General Staff Gen. Ali Kuli Khan and Gen. Musharraf’s “blue-eyed boy”, Lt. Gen. Shahid Aziz. For Pakistan watchers like me, it will be interesting to see if the author and now celebrated television anchor will get the inside story on how the Army plotted the downfall of Mr Sharif in yet another attempt to cut a homegrown political force down to size, in a continuing game of one-upmanship that mars Pakistan’s fractured polity.