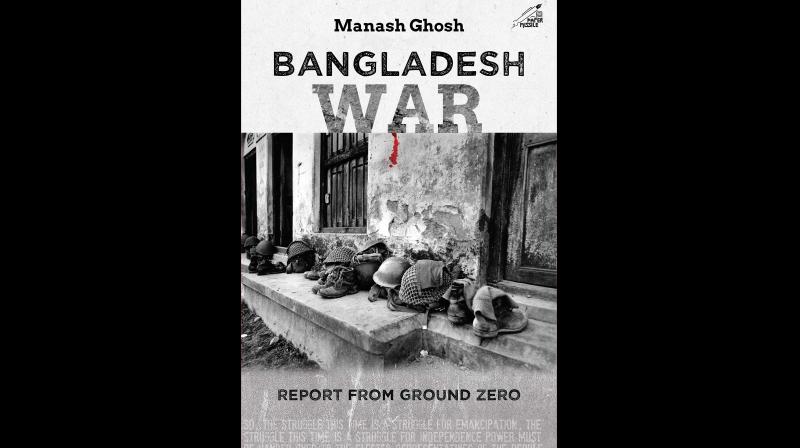 It is not always that a journalist gets a chance to be part of history in the making. But that is exactly the opportunity that came to Manash Ghosh, a young reporter in The Statesman newspaper during the time of the Bangladesh liberation struggle. A chance encounter with three East Pakistani Bengalis during a car rally led to momentous revelations and the adventure of a lifetime.

East Pakistan was in ferment and the world either did not care or was completely unaware of the cataclysmic events unfolding. A young Calcutta-based journalist was destined to make India and the rest of the world aware of the tragic and profound events within that country. The book Bangladesh War: Report from Ground Zero is a personal and compelling account of that journalist’s experience.
Veteran journalist Manash Ghosh recalls the heady times as a young cub reporter covering the Bengali uprising in East Pakistan that eventually led to the dismemberment of Pakistan and the creation of independent Bangladesh. For the author, the events were in many ways the best of times and the worst of times.

As a reporter he had an unprecedented opportunity to go where no one had gone before: into the depths of a largely unknown catastrophe that had emerged in neighbouring East Pakistan. West Pakistan’s military and civil leaders had unleashed a genocide and Bengalis were resisting. It was the worst of times because the world had not seen a similar carnage in recent history. Millions were being massacred and Manash Ghosh was among the first persons to record and report it.

The book reads like an adventure story, which in many ways it was for the author. His reporter’s instinct, doggedness in getting to the bottom of things and courage led to the finest coverage of the liberation struggle in what eventually became Bangladesh. His newspaper supported him to the hilt and he was even able to cross the borders into hostile territory to report on events. After the war, he was rewarded by being assigned the prestigious position of bureau chief of The Statesman in Dhaka, the capital of the newly liberated Bangladesh.

The book is not just about his personal experience but a first-hand account of developments during that period of intense conflict in Bangladesh. It explains the fundamental political issues, Awami League supremo Sheikh Mujibur Rehman’s travails, the reaction of the West Pakistani overlords, the brutal army crackdown  and most of all the heroic actions of thousands of East Pakistan Bengalis who were determined to rid themselves of the shackles of the West Pakistanis and their collaborators.

The book will also serve as a refreshing retelling of the events that led to the liberation of Bangladesh, which many among today’s generation of Indians would not be aware. The author has made it a point to include stories of people like India’s Major General Shahbeg Singh and Brigadier Sant Singh, whose unflinching commitment to the training of East Bengali freedom fighters contributed hugely to the success of the liberation war. In fact, the book affirms the view that the story of Bangladesh’s creation needs to be told and re-told in the subcontinent and its lessons never forgotten here.

He quotes the unforgettable December 4, 1971, address to the nation on All India Radio by India’s Prime Minister Mrs Indira Gandhi:

“A war has been forced upon us. We repeatedly drew the world’s attention to the annihilation of an entire people whose only crime was that it had voted democratically. But the world ignored the basic causes and concerned itself with certain repercussions…Today, war on Bangladesh has become war on India and this imposes upon me, my government and the people, an awesome responsibility. We are left with no other option but to put our country on a war footing. I have no doubt the united will of our people will decisively repel this wanton and unprovoked Pakistani aggression with fortitude.”

The war that followed was one of the swiftest and most decisive the world has ever seen. In a matter of a fortnight the Indian army helped by Bangladeshi freedom fighters sliced through East Pakistan and reached Dhaka where the Pakistani army was forced to surrender.

“Many seemed unprepared for this historic and dramatic development”, Ghosh writes. “Even I was overcome with an overpowering sense of fulfilment; it was as if I had realised a goal I had set out to achieve on March 27, when I first went to the Petrapole border to report on the liberation war and decided to stand by the persecuted and hapless Bengalis.”

Manash Ghosh deserves to be commended for his commitment as a young reporter during those momentous times as well as his recent labours in recording his experiences in a book that will serve as a lasting reminder of a significant moment in the subcontinent’s history.