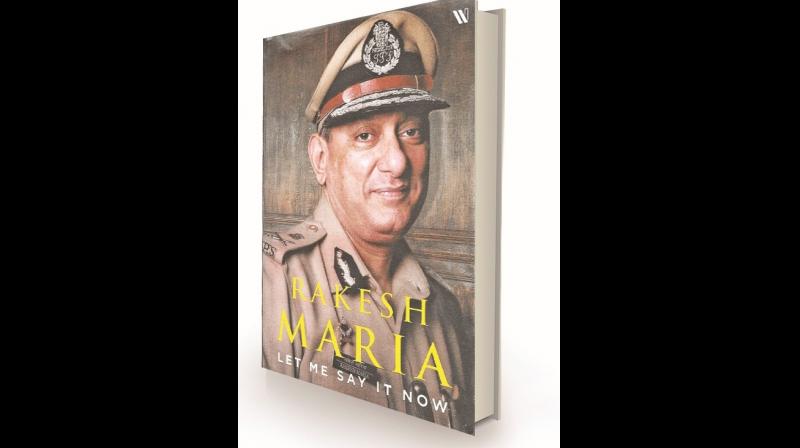 September 30, 2015. That was when Rakesh Maria’s most eventful term as Mumbai Commissioner of Police was to end. With his son Kunal studying in the US around that time finding “his soulmate” in Deeksha, a Mumbai girl, Maria and his wife were doubly happy that he could now at least have some time for the family, get down to organising his son’s wedding after that date.

Maria confides he even wrote as early as August 1 that year to both the home secretary and the principal secretary to the chief minister that on completion of his term as commissioner, he preferred a “quieter non-executive posting”. But bang came a case under the Arms Act registered at the Khar police station on August 21, 2015. It was about a young woman, Sheena Bora, allegedly killed by her own mother. It became an instantly sensational one, more so as the mother, Indrani, had married an enterprising media baron, Peter Mukerjea.

While his investigation team worked very hard on this to unravel the horror, Maria writes that with less than five weeks left for his term as Commissioner, he wanted to ensure there were no slip-ups. Maria himself interrogated Indrani, “in the presence of all officers” concerned and later Peter Mukerjea too; but trouble began when the media started reporting that Maria “knew” the Mukerjea couple, implying some sluggishness in the probe. He himself writes that he did not.

It was like instant culling for a decorated police officer who stood tall in handling some of the biggest serial blast cases the country has seen after Independence. Maria was shunted out as DG Home Guards, though officially on promotion. It was the “perfect stepping stone to retirement” but what pained him most was the “unceremonious exit” from the Commissioner of Police office.

The Maharashtra government's communication that he would still be “heading the Sheena Bora murder case” did not stop media speculations. And another twist came when the government shortly later decided to transfer the case probe to CBI. All this happened when Maria's team was in the process of filing the charge-sheet.

When bouquets are near, brickbats are not far away, more so if one had been placed in some of the key posts in the police force like Rakesh Maria. Was he not the same “controversial commissioner” who walked the streets to supervise the security arrangements for Yakub Memon’s funeral, he rhetorically asks the reader. It is to drive home that in the age of the Internet, “all versions will coexist in different forms and it will be for the reader to sift facts and separate the grain from the chaff”.

At 614 pages, Let Me Say It Now is a monumental memoir from the former Mumbai top cop, Rakesh Maria.

Maria handled some of the most challenging investigations, including the 1993 serial blasts and the November 26, 2008, terror attacks on Mumbai. Yet, by the end of January 2017, when he retired as DG Home Guards, his cup of woes was full. Written in the lucid style typical of a “Bandra boy”, his memoir aims to set the record straight, while reminiscing about his policing days, especially during communally charged settings. It shows how actors and those acted upon suffer, often disproportionate to their karma.

Maria’s father was born and brought up in Amritsar and had attended the Hindu College in Lahore. His father was passionate about music and had come to Bombay to work in the good old Hindi film industry in the early 1950s. Bombay being a “mini-India” resulted in a cosmopolitan upbringing for Maria.

A good chunk of Maria's memoir is devoted to the 1993 serial blasts, how he and his team, armed with perseverance and luck, cracked just in time Tiger Memon's involvement in the blasts, followed by his “discovery of Sanjay Dutt’s involvement”. Even the "Bombay underworld got divided on religious lines" after the Babri Masjid demolition; till then it was by and large “secular”; Maria offers. "The serial blasts completed the divide," observes Maria. Maria also traces the origins and evolution of the Indian Mujahideen.

However, the 26/11 terror attacks on Mumbai were of a totally different order. The chapter, “It was War”, is graphic and riveting. The account also highlights problems associated with the handling of the post-blast situations, the complexities of command and control, deploying limited manpower to different locales at the quickest possible time, as the terrorists by then had chosen their targets including the CST railway terminus and iconic Taj Mahal Palace Hotel, and also attending to the injured among others. Mind-boggling multi-tasking, in a word! Maria was then Joint Commissioner of Police (Crime) and in command at the control room.

Maria, who personally interrogated Ajmal Kasab, one of the jihadi youth captured live to tell the story, writes: “Kasab had said that they were 10 in all. But we could not take his word for final…The conspiracy against India had to be unravelled completely, and evidence gathered meticulously… The onus was yet again on the Mumbai police.” It was after three days he stepped out of the control room on November 29, to attend the funeral of Hemant Karkare and he lent a shoulder to his bier.

The heartburns and factionalism within the police force - sample the allegations by the late ACP Kamte's wife accusing Maria of “inept handling” of the control room — has prompted him to marshal all the facts to refute those charges. In fact, the Maharashtra government-constituted Pradhan Committee report, which many thought was “biased against Gafoor (then Mumbai Police Commissioner)”, “however created a template for a future police structure to avert, handle and tackle terror attacks in the Urbs prima”. Coming from two professionals with a deep understanding of police working, “the Report is an important document,” writes Maria.

Maria’s chance snoops into cricket spot fixing, the controversy kicked up by former IPL boss Lalit Modi’s brief meeting with him in London, which he has explained here to refute misconceptions, how a team man like him became victim of a media sting operation and his reflections on the media's role all add zest to his breath-taking story.