'My award will help regional writing’ 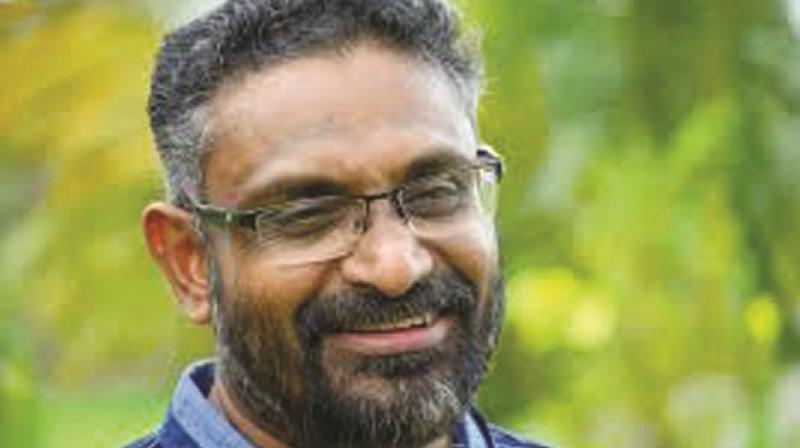 “Everything in this story is real and fictional,” reads the preface in acclaimed Malayalam author Benyamin’s new novel in translation, Al Arabian Novel Factory (Juggernaut, translator Shahnaz Habib). The literary thriller, featuring a “secret” and “dangerous” novel within a novel, is set in the aftermath of the Arab Spring in an unnamed Middle Eastern city. It is the companion novel to Jasmine Days, which won the inaugural JCB Prize in 2018.

Though originally released in Malayalam in 2014, it speaks uncannily to present times in India, with its themes of state repression and public fear. But Benyamin cuts through its heaviness with a charming lightness and dazzling quirkiness. At the Kerala Literature Festival in January, Benyamin spoke candidly to me about how he likes to change his style with every book, why it was important for him to write them as twin novels, and how translations have changed the fortunes of his novels and craft. Excerpts from our interview:

Tell us a little about what led to Al Arabian Novel Factory and Jasmine Days? Why did you write them as twin novels?

Both of them are all about the Arab revolution. I was in the Gulf for 20 years and I met many Arab people. Initially I thought they were all living there happily. But after about 10 years of knowing my friends, they revealed to me that they do have democratic ambitions. All of a sudden, the Jasmine revolution started in Tunisia, Egypt, and in Bahrain too, where I lived. That’s when I realised how frustrated they were, with thousands of people demonstrating on the streets. They broke the code and started talking against the government. Unfortunately, the protests were suppressed. That’s when I thought I should write about it. That was the idea behind both the books.

It was planned as a single novel. But when I collected the material from many areas I knew that I could not include it all in a single novel. Then I separated the material: the incidents and experiences from the period of the revolution went into Jasmine Days, and the period after the revolution into Al Arabian Novel Factory. In Malayalam, it was published as twin novels and released together, but in English, it was released one after the other. You can read either novel first and then the other, there is a connection between the two.

So you moved back to Kerala and then wrote the novels here. You were already known for writing the bestselling Goat Days. What did Jasmine Days winning a major award in translation change for you?

After winning the JCB award I got so many readers from outside India, from Europe and Latin America especially. Earlier, it was mainly the critics who told you what to read but these days readers tend to also look for books that have won an award. This is perhaps the first time that a regional book won a major award in India. The award has helped the translation process very much. Now publishers are looking for new books not only from Malayalam but other regional languages. It will help regional writing and I’m happy about that.

You’re mischievous with your writing and plotting. Talk to us about how you developed your style?

It’s my duty to keep readers with me till the end of the book, so I use many techniques to keep them engaged. It takes 3-4 years to get clarity on the novel, to decide from which character’s perspective I will tell the story. My style develops along with the novel, and every book must be different from the precious one.

Reading Al Arabian Novel Factory is a bit surreal, given how much of it seems applicable to the situation in India today. What do you make of it?

When I wrote it, I never thought those things will happen in India. I chose to come back here because I thought it is the most freedom giving country. But all of a sudden everything changed, there is fear everywhere and no one is willing to speak openly. But I am thinking positively. Our youth is bold and strong, the kids are on the streets, and I am with them.

What kind of working relationship do you share with your translators?

I do not interfere much because it is a entirely different process of transforming the text from one culture to another. A translation into English must address a world reader and elaborate on things that a Malayalam reader already has knowledge about. In the final stage, when they share it with me, I may make some corrections. If they have any doubts, I clear them. Otherwise I give all the freedom to them. I was so happy with Shahnaz Habib, who is in New York and knows what a global reader is. The two books she translated have done very well.

Has the success of your translated novels changed the way you write in Malayalam? Do readers respond to your books differently, depending on the language they read them in?

Nowadays I think I should think about readers in other languages as well. If I use a word or an idiom in Malayalam, I do think about how it will translate or how it will be communicated to a world reader. It does affect my writing now. Readers in Malayalam connect with me as the writer of Goat Days and compare the new novels to it. English readers read more openly. The twin novels have been better received in English, because they came out at the proper time. In 2014, when they released in Malayalam, readers thought the events in the books were happening somewhere else and were not related to their lives. But now, the novels are reading well, very differently from when it was first released.

What are you working on at the moment? Does the current socio-political moment in India inspire you to write?

The current situation might come into our books after 10 years. It will lie in our mind for some time. Nowadays I am trying to write about the travels of Malayalis. It is a fictionalised account of the community and their travels around the world, their migration, their suffering.