No blood and gore, fists don’t fly either

If you pretend that this book is not part of the Millenium series, it’s absolutely fine. 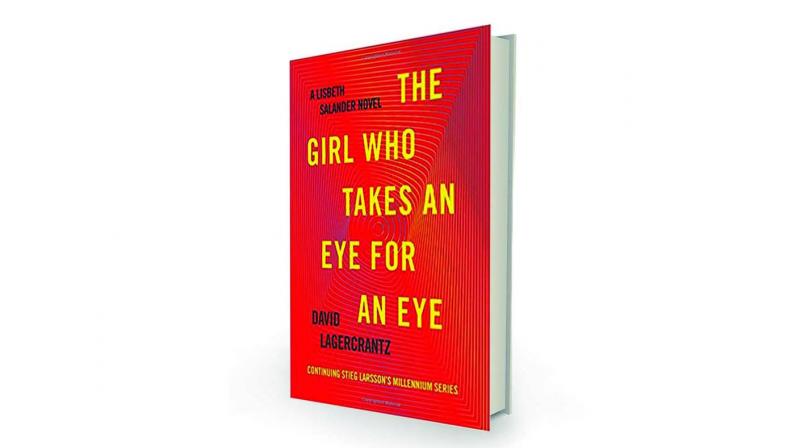 The Girl Who Takes an Eye for an Eye by David Lagercrantz Hachette India, Rs 599.

For those who came in late, Swedish journalist Stieg Larsson’s Millenium trilogy was published after he passed away in 2004. The Girl with the Dragon Tattoo, The Girl Who Played with Fire and The Girl Who Kicked the Hornets’ Nest were raw, gritty and gut-wrenching, with fascism, sexual violence and torture by institutions of the state as the central theme. The victim, punk hacker Lisbeth Salander, took our breath away by playing a fiery avenging angel — she was the heroine the world was absolutely ready for. We couldn’t help but cheer as she teamed up with a crusader, journalist Mikael Blomqvist. And as we flinched and winced our way through the graphic violence, sexual assaults and glaring injustice, we grew deeply attached to both of them.

Swedish journalist and author David Lagercrantz was asked to continue the Millenium series, and The Girl Who Takes an Eye for an Eye is his second contribution. Lagercrantz goes a little beyond Sweden’s problems in this book. The most pressing topics, as far as Blomqvist is concerned are “the refugee catastrophe, the terrorist attacks, the rise of right-wing populism and fascism across Europe and the US”. Also, sinister cyber surveillance, alt facts, fake news and disinformation campaigns. Russia is dutifully mentioned, naturally: “No one knows who in Russia is behind it. The gentlemen in the Kremlin claim to have nothing to do with it, of course.”

Salander is in jail and she feels protective towards a Bangladeshi origin inmate, Faria Kazi, who is being harassed by another inmate — an extremely strange and evil comic book character-like woman called Benito who has a swastika tattooed on her throat. Benito is in for murder, she’s in touch with criminals and terrorists in the outside world (in fact, the prison practically runs on her command), and has a thing for knives. Holger Palmgren, Salander’s guardian and lawyer (one of the few people she trusts), visits her in jail and tells her a former secretary at the psychiatric clinic where Salander was abused as a child had given him some documents relating to Salander. The Registry for the Study of Genetics and Social Environment is mentioned, and Salander dismisses it as “some idiots who imagined you could study the impact of social environment and heredity by sending children away for adoption.” This is a big “aha” moment, of course (remember, Salander has an evil twin in Russia). Meanwhile, an unexplained
hacker attack makes stock markets crash and then boom again. And with this, the ball starts rolling.

Now, for an important question: just how squeamish are you? If the answer is not at all, then you may well be disappointed. In fact, if you’re a die-hard Larsson fan, you will be forgiven for believing that Larsson had a deep and meaningful discussion with Mahatma Gandhi in heaven and became a disciple of non-violence. The usual blood and gore has been replaced with genteel injections, sort of like euthanasia. Fists don’t fly in a frenzied manner — they decisively aim for the solar plexus and other parts of the anatomy that instantly disable the adversary. If a film is made on this book (which I’m sure it will), the choreographer hired for the fight scenes will be sorely disappointed — even Harry Potter and the teenybopper Twilight series had more violence! If you are terribly squeamish, however, you have no reason to whine. Apart from the fact that this reads like just about any ordinary thriller. It’s a page turner alright, with Bangladeshi honour killings, ghastly Mengele-like experiments on the poor and m
inorities, and hackers playing their disruptive games on the world.

The real mystery for Larsson fans, however, is why Lagercrantz decided to shove Salander into the background? She pops up occasionally, but this story doesn’t really revolve around her issues — she’s fighting for justice for Faria Kazi and her boyfriend, a Bangladeshi blogger: “Before they had properly introduced themselves he was telling her (Faria Kazi) about the blog he had contributed to in Dhaka which promoted free speech and human rights. The bloggers had ended up on Islamists’ hit lists and had been targeted for murder, one after the other. They were butchered with cleavers, and the police and the government did nothing, ‘absolutely nothing’, he said. And so he had been forced to leave Bangladesh and his family, to seek asylum in Sweden.”

Fighting for someone else is all very well (and it would be cruel to wish that Salander is still being abused and tortured), but does her character have to be fiddled with as well? It hurts to see this watered down version of one of the strongest characters in modern fiction (like the Salander of old, you may even want to take revenge for this travesty). Her visceral hatred for the establishment is mentioned frequently, but she comes across as just a sulky, moody teenager. She even reacts like a reasonable person when Stockholm chief inspector Bublanski tells her: “Eventually you’ll have to start trusting people, Lisbeth, even the police.” Gosh. Oh well, maybe Lagercrantz decided it was time Salander grew up.

On the other hand, if you pretend that this book is not part of the Millenium series, it’s absolutely fine. Entertaining too. It would be nice to read more thrillers by Lagercrantz — with characters of his own creation, however. Salander should be left alone. As the saying goes, “if it ain’t broke, don’t fix it”.

Tags: girl with the dragon tattoo