What keeps ties between US and Pakistan ticking

The US decision to make Pakistan an ally and stand by it no matter what has often hurt India. 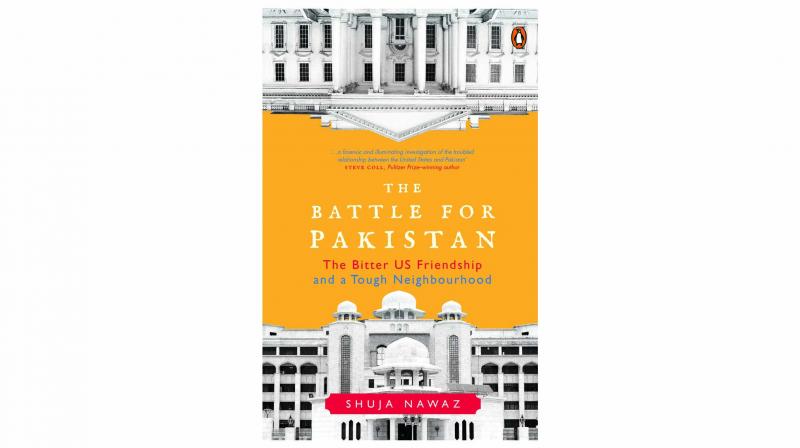 The Battle for Pakistan: The Bitter US Friendship and a Tough Neighbourhood, By shuza nawaz Penguin Random House pp.374, Rs 799.

The strategic establishment in the United States realised in the late 1940s the importance of Pakistan’s geography in the emerging world order with the Soviet Union hanging over Asia and the oil rich Middle East wedged between unstable, competing regional forces. Pakistan thereafter became a key factor in Washington’s Asia policy. And while much might have changed in the US-Pakistan equation, this fundamental fact has not.

This explains why relations between Washington and Rawalpindi, despite all the strife and bad blood, have not snapped. The subject of strategic writer Shuja Nawaz’s latest book, The Battle for Pakistan, addresses precisely this fact.

“The US-Pakistan relationship has often been compared to a bad marriage,” the author writes in his preface. “In many ways, the seventy-year-old US-Pakistan relationship, with its many ups and downs, alternately filled with both tantrums and fulsome praise for each other, has become a tragicomedy on a regional political stage, with numerous bad actors and confused heroes and heroines.”

Although the author has dealt with this troubled relationship in a previous book (Crossed Swords), times are rapidly changing which calls for a follow up. Global equations are changing and the United States, once hostile to India, has become a friend and Americans in general have become less tolerant of Pakistan’s Islamists, especially after Osama bin Laden was found hiding in its backyard.

The author believes that Washington cannot absolve itself of blame for the soured relationship: “During the period 2008-2018, the US chose to continue to deal with the powerful Pakistani military as its preferred and main interlocutor, despite the emergence of a fledgling democracy in Pakistan… America failed Pakistan by relying too much on its military partners in Pakistan and mollycoddling the corrupt civilian leadership. It also failed the Pakistani people by ignoring them in the main…”

“The arrival of President Donald Trump in 2017 brought with it a new muscular US foreign policy and a shortsighted view of regional relationships. Hence, the US risks losing not just the war in Afghanistan and peace in South Asia, but also losing Pakistan as a potential friend in stabilising the Middle East.”

The US decision to make Pakistan an ally and stand by it no matter what has often hurt India. Few in India will ever forget how in 1971 when the Pakistan Army in East Pakistan was butchering Bengalis by the thousands, Washington instead of admonishing or curbing the Pakistani war machine threatened India by sending the US Seventh Fleet into the Bay of Bengal.

Subsequently, the US decision to ignore Pakistan’s nuclear weapons programme in order to ensure the success of the anti-Soviet Afghan jihad turned out to be a huge strategic setback for India and an enduring threat for the entire region.

Many would therefore contest the author’s view that Washington is not mindful or fully appreciative of “Pakistan’s existential struggle”. For, it could be argued that much of Pakistan’s fundamental problems arise from the fact that it chose to make India its enemy right from the time of its creation. The belief that Hindu India is an “existential threat” to Pakistan is of its own making and no outsider can do anything about it.

All this is one reason why Indian strategic experts might find fault with many of the author’s assertions and explanations. But that is not what the book is about and nor does that ultimately reveal its worth.

The greatest strength of the book is the author’s mindset. Nawaz is no Islamist zealot or a Pakistani Army lackey; nor is he a Pakistan-baiter. Despite leaving Pakistan and migrating to the United States where he has taken up citizenship, Nawaz is known to have maintained good relations with the powers in his home country. He remains proud of his Rajput ancestry which naturally places him on the side of Pakistan’s martial classes.

At the same time, he continues to be a critic of his country’s military, especially its propensity to dwarf and manipulate genuine democratic forces.  In his previous, much acclaimed book titled Crossed Swords: Pakistan, its Army and the Wars Within (2008), the author dispassionately traced the Pakistan Army’s tradition of interfering and often sabotaging civilian governments.

Yet the author is not completely hostile to the Pakistan Army and this allows him to analyse without prejudice many of its important actions and explain much of its motivation. As in his previous book, Shuja Nawaz provides the reader an invaluable glimpse behind the steel curtain that the Pakistan Army shrouds itself in. That in itself is reason enough for Pakistan watchers to treat this book as a must read.