Books   23 May 2021  Book Review | If only our netas read Gandhi, instead of making him a deity
Books

Book Review | If only our netas read Gandhi, instead of making him a deity

With Covid fatalities soaring, we can hardly dispute the Mahatma’s opinion 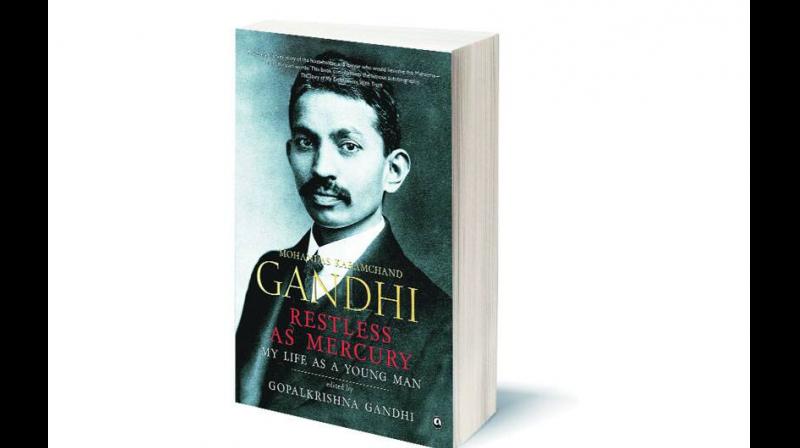 Gandhi might have thought it was the universe whose position needed slight adjustment. (Image by arrangement)

Symonds thought that was because of Pyarelal’s translations. But the sparkling prose of Restless as Mercury: My Life as a Young Man leaves readers in no doubt that the future Mahatma needed no translator to brush up his language.

I was not at all surprised, therefore, to gather from the text that the book’s catchy title is Gandhi’s own description of his personality. It may have been originally coined by his sister, as the jacket blurb claims, but Raliyat Gandhi, who does not appear in the story, would have used a Gujarati version of the phrase. Four lines after admitting “I used to be restless as mercury, not sitting still even for a little while”, Gandhi stresses how “revolting” he found the spectacle of “cows freely eating human faeces”. He says “the feeling has persisted to this day”.

If India’s leaders had read Gandhi instead of elevating him to a deity and worshipping the deity for their own political purposes, people would not have been deluded today into believing that cow dung and urine cure coronavirus. They might then have been spared the agony of mucormycosis, the aggressive “black fungus”, among Covid-19 patients. Of course, by his own admission, Gandhi, too, was a slave to quackery, insisting when his wife was ill in South Africa that she give up salt and pulses.

Typically, he responded to her protests not by scientifically explaining the benefits of this sacrifice but with the emotional coin of himself also giving up salt and pulses.

The childhood encounter with cows is one of many episodes in this engrossing book that recall the wisdom those old sayings “morning shows the day” and “the child is father of the man”. Gandhi can say with the Alexandrian poet, Constantine Cavafy (quoting from memory after fifty years), “Under the passions of my youth/ Were being formed the patterns of my poetry,/ The province of my art was being planned.”

In a sense he was shaped in the crucible of South Africa. Continuing the analogy, it can be said of the enigmatic and intriguing man who shook the mighty British empire, (as E.M. Forster said of Cavafy) that he stood “at a slight angle to the universe”.

Gandhi might have thought it was the universe whose position needed slight adjustment. Some might say such grandiosity came later when the acclaimed Mahatma parleyed on equal terms with the representative of the King-Emperor. They would be wrong. One episode in this book explains that the self-esteem was always there. A letter from his son Harilal, with whom relations were strained, prompted Gandhi to ask himself if he had “failed to take sons’ interests into account”. His answer was a resounding and uncompromising “No”. As he explains, “I did consider their interests, too, according to my own lights.” His own lights! It was all that mattered.

There is nothing to beat honest righteousness. One can understand the intense frustration that must have inspired South Africa’s General Smuts’ “The saint has left our shores, I sincerely hope forever” when Gandhi returned to India for good in 1916.

In much the same vein, Bhimrao Ramji Ambedkar claimed that Gandhi’s national status owed something to a tendency to speak less than “the whole truth.” But the Dalit leader should have known there was no conscious suppression: Gandhi merely shared what he thought relevant.

Under the passions of his poetry (returning to the Cavafy analogy) also lurked a healthy respect if not for Britons, then for the institutions they had shaped and the beliefs that had inspired them. “Englishmen must learn to be the Brahmins, not Banias” he wrote elsewhere. He spoke of the Imperial Crown, of being British subjects, of Magna Carta.

The alternative to genuinely believing in the praise he frequently heaped on Britain and the British would cast too much aspersion on
Gandhi’s character to be acceptable.

This record of his years in South Africa also traces the beginnings, emergence and gradual solidification of ahmisa and satyagraha, the weapons of war (or peace) that he wielded with such deadly effect.
The fasts, convictions and jail sentences they resulted in brought to an end eight years of struggle against an iniquitous racist dispensation.

Later, Gandhi employed those same methods with devastating effect against a much more formidable adversary. But that story has been told many times already.

His grandson and editor, Gopalkrishna Gandhi, has recreated this section of his life from Gandhi’s own writings scattered in many places.
It must have been a monumental enterprise, possible only because it was a labour of love. All the greater the pity that minor flaws sometimes mar the effect. I am curious about “India Club” in Calcutta; also the “India House” in London Gandhi stayed in. One or two personalities could have been explained. Moreover, computer spellchecks don’t spot words that are correctly spelt but accidentally misused. There is no mechanical substitute for thorough proof-reading. Such minor infelicities cannot of course be blamed on Gandhi. His writing grips the reader from beginning to end. Once started, I could not put down the narrative.

Let me end with Symonds as I started. I can’t be sure from the context whether it’s the same Symonds to whom lavish compliments are paid on page 139 but Gandhi was obviously fond of the young Quaker.
When he fell ill of typhoid in Delhi, Gandhi took him into Birla House, allowed him to drink a glass of beer and nursed him back to health saying that a public hospital would kill him. With Covid fatalities soaring, we can hardly dispute the Mahatma’s opinion.

The writer is a senior journalist, columnist and author

Mohandas Karamchand Gandhi: RESTLESS AS MERCURY: MY LIFE AS A YOUNG MAN