Just a handful of them rise above their small-mindedness, but this is as true a picture of average Indians as any. 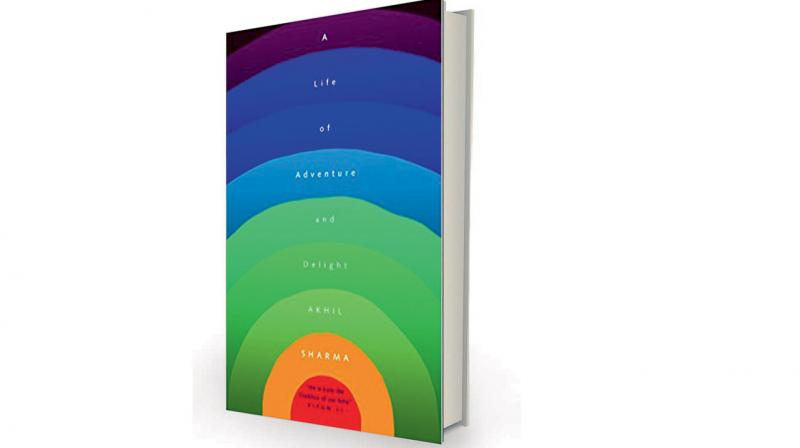 A Life of Adventure and Delight by Akhil Sharma, Penguin Random House, Rs 599

Remember the spoofy Channel V promos featuring the absolutely charming and dashing Quick Gun Murugun?  The tagline, “We are like this only,” could well be used for Akhil Sharma’s collection of eight  stories in A Life of Adventure and Delight.

While Sharma’s stories are far from being spoofs (he writes of his characters with affection, understanding and a touching degree of earnestness), they bring out the foibles and cultural characteristics of conservative, small town/village Indians who reside in the US and India. The sort of Indians who are always worried about what people will say.

Sharma’s simple prose is effortlessly elegant, and the open-ended stories are slice-of-life situations about ordinary people who mostly live mundane lives.  Meet retired Gopal in Cosmopolitan. He’s reduced to reading girlie magazines for tips on how to woo women after his daughter flies the nest and his wife leaves him. Then there’s young Gautama, your typical hormonally-charged Indian who wants lots of sex before marriage.

Marriage is a recurring theme, and arranged marriages are the norm:

“Arun Kumar had just turned twenty-four when he decided that he would marry the chubby, round-faced girl he had never met.”

There’s a newly married woman who falls in love with her husband for just a few hours. A newly married man whose family is furious that the bride’s parents have reneged on the promised dowry and all they have received are a few thousand rupees and a pointless washing machine: “They give us a washer and we have water two hours a day? Would sane people do that?”

Then there are other stories that break your heart. Like the little boy in You are Happy whose mother is an alcoholic. And another little boy in Surrounded by Sleep who prays a lot because his brother is in a coma; this story is lightened, however, by black humour, particularly on the Indian habit of bargaining with God:

“Ajay, in his nervousness, spoke the truth. ‘I’m asking God to give me a hundred percent on the math test.’ His mother was silent for a moment.

‘What if God says you can have the math grade but then Birju will have to be sick a little while longer?’ she asked.

Ajay kept quiet. He could hear cars on the road outside. He knew that his mother wanted to bewail her misfortune before God so God would feel guilty.”’

Be warned, though: it’s not easy to warm to the characters because most of them are petty, small-minded and terribly exasperating, to say the least. Your eyes will get a fantastic yoga workout with all the involuntary eye-rolls you’re bound to do. Here are two examples:

“Gautama was an ordinary middle-class boy. He knew he would have to get married one day, and he hoped to have as much sex as possible before then, but he also believed that any Indian girl who had sex before marriage had something wrong with her, was in some way depraved and foul and also unintelligent. He wished he could have sex with Sunny Leone.”

“The food came and we ate quickly and mostly in silence, though all of us made sure to leave a bit on the plate to show how full we were.”

You cannot help but cheer as Sharma nails the inherent cheapness of Indians in A Heart is such a Heavy Thing:

“A waiter passed, and Arun ordered a drink. ‘Can you fill the whole glass?’ he asked. He had drunk perhaps five times in his life, and hated alcohol, but because it was free he felt obliged to consume as much as possible.’

And would a book on Indian foibles ever leave out the nepotism-happy, apple-polishing Indian who expects his bosses and friends to get jobs for his family? Certainly not! “Prasad Kumar raised his voice to make sure they heard: ‘All Mr Gupta has to do is look at someone and the person gets a job, a wife, a government flat.’ He nodded at his own words.”

In the stories on Indians in the US, we catch glimpses of cloying insularity. Characters who have lived in America for decades mainly socialise at homes of fellow Indians, Hindu cultural associations and temples, and even young visiting students tend to stick to each other:  “The graduate students from India, even when they didn’t know each other well, treated one another with the politeness of people who live in the same lane.”

Relationships with White women are fraught with insecurity and lack of understanding. Gopal’s tantrum in Cosmopolitan while wooing his White neighbor is a fine example:

“When you talk about how your breasts fall or how your behind is too wide, I always say that’s not true. I always see you with eyes that make you beautiful.”

“Because I want the truth,” she said, also angry.

It’s impossible to like any one of the characters, really. Just a handful of them rise above their small-mindedness, but this is as true a picture of average Indians as any. We are like this only, wouldn’t you agree?

Tags: book review, a life of adventure and delight