A nostalgic touch to children’s adventures

So it’s an apprehensive bunch of children who step off the train at the village. 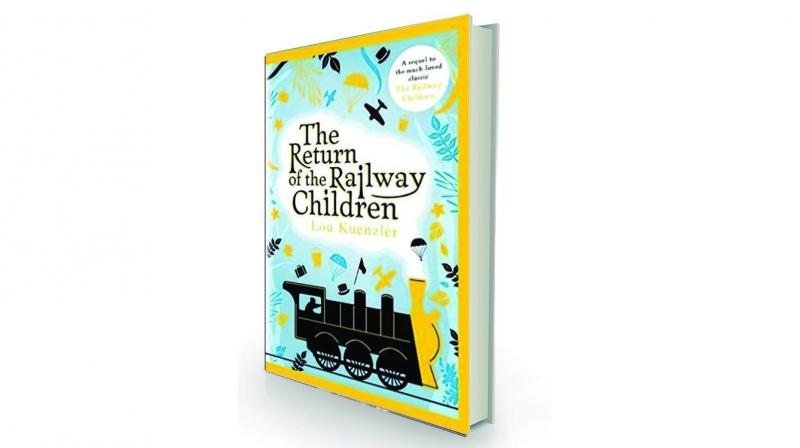 The Return of the Railway Children by Lou Kuenzler Scholastic, Rs 755

I was 11 years old when I first discovered the books of E. Nesbit, a Victorian writer of children’s books. A fabulous new bookshop had just opened in Calcutta and its children’s section stocked much, much more than the usual Enid Blyton and Hardy Boys and Nancy Drew books: there were shelves and shelves and shelves of books by authors I had never heard of before. Thanks to a pair of indulgent parents, I had the means to go through the shelves with the kind of thoroughness that my school teachers would have loved to see in my homework, and that’s when I came across E. Nesbit, a writer who, within the first few pages of the first book of hers I ever read, became such a favourite that I continue to seek her books even now, nearly four decades later.

Of all Nesbit’s books, The Railway Children became my ultimate favourite. It is placed right up there in the category of book beloveds that I call “comfort books” — books that I turn to whenever I feel low, and whenever the nastiness of the world feels too much to cope with. It’s about three children who are taken away by their mother from their comfortable life in London to a small cottage by a railway station in a village; they have been told that their father is making a long journey elsewhere, and that is why their lifestyle must change for a while.

Within weeks, these three children, Roberta, Peter and Phyllis, adopt the station by which they live, wave to every passing train, have train-related adventures, and become Railway Children in every way. The book is more than lovely, it gives me goosebumps, and I still re-read it whenever I need to.

Last week, browsing through the several publishers’ newsletters I have signed up for, I discovered The Return of the Railway Children, a sequel to The Railway Children. Not by Nesbit herself, unfortunately, but a modern writer, Lou Kuenzler, who has set the book during World War II, and introduces Phyllis’ daughter Edie, and two other children, Gus and Greta, all three of whom are being evacuated out of London to escape the Germans’ bombing.

Edie is going to stay with her Aunt Roberta in the same cottage that Roberta, Peter and Phyllis grew up in, but she’s a little nervous — Phyllis and Roberta have been estranged for a long time, apparently because Roberta disapproves of Phyllis’ lifestyle as a pilot and unmarried single mother. In which case, wonders Edie, how awful will her aunt be to her?

Gus, on the other hand, has worse things on his mind. His father is a German who has been placed in a camp for enemy aliens, and in the anti-German climate of Britain during World War II, he is both angry about what has happened to his father, and overly defensive about what might happen to him and his fiver-year-old sister Greta should anyone learn that they are half German.

So it’s an apprehensive bunch of children who step off the train at the village. But over time, the village station and the trains that pass through it capture their imagination, and just like the generation before them, Edie, Gus and Greta become the Railway Children.

The three children have many, many adventures, of which the biggest of all is hiding a German pilot from the authorities after his plane crashed close by, and outing a nest of spies. The tension is high in these chapters, but the smaller adventures are light and funny, and altogether I thoroughly enjoyed reading this book.

Kuenzler’s writing does not quite manage the warmth with which Nesbit wrote, but it is fairly close, and so I read The Return of the Railway Children not gnashing my teeth and planning terrible types of torture for the authors concerned as I tend to do while reading the work of modern writers trying to muscle in on popular series by long dead authors (Sebastian Faulkner’s nightmarish attempt at P.G. Wodehouse’s Jeeves series comes to mind, as does Sophie Hannah’s relentlessly rubbishy books starring Agatha Christie’s Poirot). Instead, I rather loved The Return of the Railway Children: not only did it return me to a book I love, but it also took that book and made it if not better, then at east bigger in scope and potential for delight.

Incidentally, this is not the first “sequel” to a book by E. Nesbit. A couple of years ago, I was thrilled to stumble upon a book titled Five Children on the Western Front by new-to-me author Kate Saunders.

This book features Cyril, Anthea, Robert, Jane and the Lamb from Nesbit’s exciting Five Children and It, in which the children meet a sand fairy called the Psammead who provides them with tonnes of adventures. But the five children are now grown up, and the Psammead, who had vanished at the end of the original book, has suddenly reappeared in their lives to help them deal with the awful effects of World War I.