How ‘Indian gymnast’ stopped being an oxymoron

The book has some priceless photographs from the history of gymnastics in Tripura and some personal ones from Dipa’s household in black and white. 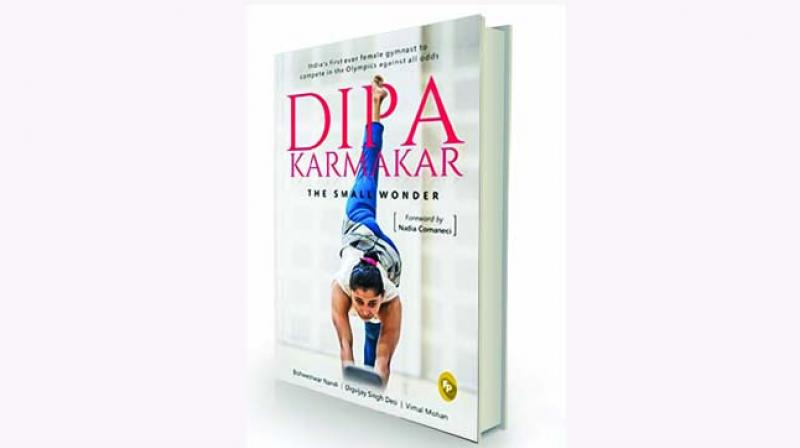 History will remember the gutsy Tripura gymnast, Dipa Karmakar, as a case of so-near-yet-so-far at the 2016 Rio Olympic Games. She finished fourth in the vaults and missed a bronze medal by a margin of 0.150 points. But she won the hearts of millions of Indians who admired her courage. Her execution of the dangerous Produnova, one of the most difficult routines in gymnastics, made Dipa a media sensation. Suddenly, the daughter of a Sports Authority of India (SAI) weightlifting coach was being considered to be for gymnastics what Sachin Tendulkar is to the game of cricket. Her natural simplicity did not do her any disservice either.

Short and with big upper legs, Dipa is the opposite of the svelte ballerina-like gymnasts of eastern Europe, one of whom is the five-time Olympics champion, Nadia Comaneci, who wrote the foreword for this book. She rather reminds one of  Simone Biles of the United States, who has also defied stereotypes to become a star.

From faraway Tripura and anonymity to near glory at Rio de Janeiro has been Dipa’s trajectory. Her struggles and sacrifices, the decade of hard work she put in (Dipa trained six to eight hours a day) — all stories are expertly documented in this first-ever book on an Indian gymnast. Sports journalists Digvijay Singh Deo and Vimal Mohan are good at their job. Her relationship with her coach Bishweshwar Nandi, who is co-author of this book, is captured. It is an informative biography. The focus is not only on Dipa, her family, her training and childhood memories, but also on her home state Tripura, which has a history of producing outstanding gymnasts.

An unusual narrative structure makes this book engrossing. It is told in first person, by the gymnast herself. The story goes backwards and forward in time. The start of the book takes us through Dipa’s incredible performance at Rio 2016, how her euphoria at coming fourth turns into misery at missing the medal, all due to media pressure. Just when friends, family and numerous Indian fans were celebrating her performance, she broke down. From Rio the narrative then moves to Agartala, Tripura, describing it as India’s gymnastics capital between the 1960s and the 1980s. Dipa recalls the contribution of late Dalip Singh, a National Institute of Sports-qualified coach, whom she anoints as the godfather of the sport in Tripura. Dalip, who hailed from a farmers’ family in Mahendragarh, Haryana, is credited with raising the first crop of national-level gymnasts from the region. Bishweshwar Nandi was one of his disciples. There are tributes and brief life-sketches of the pioneers — Bharat Kishore Deb Burman, Mantu Debnath, Kalpana Debnath and Banasree Debnath.

The side stories in the book give it a wider dimension. Nandi’s career as a promising gymnast is traced. He was three-time national champion and he participated in the 1978 Commonwealth Games, and the 1978 and 1982 Asian Games. He was captain of the Indian gymnastics team in six tournaments, reaching the finals on several occasions. But he only won medals in invitational tourneys in Karachi and Iran.

But then four decades ago, the apparatus for gymnastics was basic. As Dipa narrates, “Most of the apparatus in centres across India were sourced from a company in Ambala. It was not possible to improve drastically while using them.” A few months before the 2014 Commonwealth Games, Nandi spoke to SAI project officer Indrajit Singh Pabla for a foam pit for Dipa to practise the Produnova. Pabla persuaded then director general Jiji Thompson to procure one and within a month it was installed at the Indira Gandhi Indoor Stadium at `25-30 lakhs.

When Dipa reached the vault finals in Rio, her coach was asked by Injeti Srinivas, then D-G, if anything was needed. Nandi said, “We need the physio, Sajad.” There were no bureaucratic delays. Srinivas promptly issued orders for Sajad’s journey to be cleared. The physio, who had worked with Dipa earlier, landed in Rio the very next day.

Expectedly, Dipa also faced her share of gender slandering. After the 2010 Commonwealth Games in Delhi, a male athlete dismissively referred to her and Nandi as “a buffalo and a donkey”. But Dipa brushed it off and went on to win her first big medal, a bronze, in the 2014 Games. In another instance of prejudice by mainland journalists, Nandi was asked how Tripura could be the base for a gifted champion. Dipa has written: “Not sure whether they were trying to find an analogy of mine with Tarzan as I definitely did not learn gymnastics jumping from tree to tree.”

At the Glasgow Games, Dipa first attempted the Produnova. Her coach had watched this difficult routine on YouTube several times and then coaxed his ward to attempt it. She is said to have replied, “Sir, I am even ready to jump from the second floor of a building [should you so bid it].”

At Glasgow as well, Dipa injured her ankle warming up during the preliminaries. She performed with her injured ankle and still qualified. The doctor in the Games Village thought it was a hairline fracture but Dipa wrapped her foot in a tight crepe bandage. The ankle held up. Exuding confidence, she completed the Produnova amid thunderous applause and bagged her medal.

At Rio, the pressure of expectations on Nandi was huge. So much that he started surviving only on pizza slices and lost three kilograms. On the day of the final he woke early and paced outside Dipa’s room. Dipa, a foodie, enjoyed a hearty breakfast of cornflakes and milk, followed by chicken and yoghurt and packed some fruits in her bag so that she did not get hungry before her afternoon event. Dipa’s birthday came just before the final. A cake was arranged. Dipa cut it and though she has a sweet tooth, on the instructions of her coach, did not take a bite.

The book has some priceless photographs from the history of gymnastics in Tripura and some personal ones from Dipa’s household in black and white. There are also colour photographs of her training routines and with personalities like Prime Minister Narendra Modi, former chief minister of Tripura Manik Sarkar, iconic actor Amitabh Bachhan and Tendulkar.

The road to the top is lonely and tough. But the last words belong to Dipa: “Once again, it is the turn of the donkey and the buffalo to prove everyone wrong. We have done it once, and we can do it again.” Dipa is now focussed on the Tokyo Olympics in 2020.