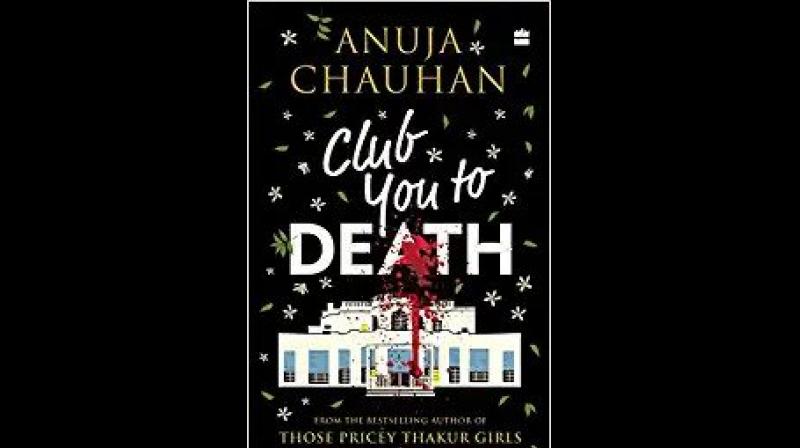 There are three qualities that Chauhan novels are famous for: a toe-curling romance, mostly between polar opposites; a larger story where said polar-opposites are required to rise up to a challenge. — DC Image

In Club You to Death, her sixth novel (and first cosy crime), bestselling author Anuja Chauhan chooses to set the action in the posh Delhi Turf Club, located in the salubrious environs of Lutyens Delhi. Modelled mostly on the Delhi Gymkhana — though in the Acknowledgements Chauhan credits, in addition, several other clubs from across the country — “The Army Club in Dinjan”, “the DSOI at Dhaula Kuan”, “the Press Club of India at Raisina Road”, “the sunny sky-blue Bangalore Club, the multi-balconied Catholic club, all clubs, basically!” — DTC, that bastion of “old, established Dilliwallas”, automatically brings her fans right back to the territory where her most memorable book Those Pricey Thakur Girls was situated.

Of course, TPTG was about the genteel, sometimes even shabby, lives of the propertied elite in an India that was still socialist, while, in stark contrast, CYTD is about the capital’s super-rich, whose portfolios have multiplied several hundred times since liberalisation, and their kin, the not-particularly-wealthy-but-still-super-privileged upper-classes — retired home secretaries and generals — whom we get to see up close and personal, warts and all, through Chauhan’s wacky (and prismatic) lens.

There are three qualities that Chauhan novels are famous for: a toe-curling romance, mostly between polar opposites; a larger story where said polar-opposites are required to rise up to a challenge, whether war, investigative journalism, politics or cricket, that brings about a kind of coming-of-age — this is what gives Chauhan’s popular fiction its signature heft; and most importantly, the way she uses a polyglossic register to bring alive a specific world, in English. And it is safe to say that in CYTD she doesn’t disappoint on any of these counts.

The story begins with Akash ‘Kashi’ Dogra, an idealistic lawyer who tries to live down all his elite connections — schooling in “TVVS” and Doon for instance, and the DTC membership his father has bestowed upon him much like a family inheritance — by living in a barsaati in Nizamuddin, representing slums in the Supreme Court (and winning them large compensations from the government), and being continually inspired by his fiery girlfriend Kuhu Banerjee (“JNU ki Bangalan” to his mother Mala) who is busy building a school in Kalahandi.

Much against his will, Kashi finds himself at DTC on “Tambola Sunday”, and realises that he hadn’t abandoned “the sprawling, sunlit, dahlia-edged lawns” awash with “the well-remembered Sunday morning bouquet of candyfloss, tandoor smoke and strong beer” because of his principles but chiefly because DTC is second home to his ex-, Bambi Todi, pint-sized heiress to the vast Todi fortune, who had dumped him unceremoniously three years ago, when her parents had fixed her match with tycoon Anshul Poddar, who also happened to be one of the most eligible bachelors in the national Marwari community. (However, Anshul had died tragically after the engagement.)

Fate conspires to throw Bambi and Kashi together again — rekindling old sparks — when, the day after Tambola Sunday, the club’s handsome Zumba instructor Leo Matthews is found dead in the gym at DTC, and investigations reveal he had been poisoned. ACP Bhavani Singh, the true breakout character of this book, “cute as a cheeku and keen as a cheel”, is deputed to solve this case. Married to an English teacher and father to two grown-up daughters, Singh is mellow, decent, fit — single-handedly redeeming the image of the Delhi Police — and invariably uses the charming “hum” that is common in eastern UP and Bihar versus the “main” of I-obsessed Delhi, that Chauhan has translated cleverly into “we”. (That Singh uses the royal “we” is definitely one of the linguistic masterstrokes of this book.) Aided by his deputy, the irascible Padam Kumar, Bhavani Singh realizes quickly that he needs an “insider” or two to navigate the murky corridors of DTC, and drafts in Kashi and Bambi to help. And soon secrets begin to tumble out by the dozens, leading, 350-odd pages later, to a proper Agatha Christie-like finale, where “Cheeku-cheel Bhavani” performs like Poirot in front of a gathering of all the players.

Having dominated the rom com segment for a decade now, it is understandable that Chauhan would want to venture into new territory — the cosy mystery — and, with Baaz, she had in fact experimented with the element of suspense in her tale. But it is also arguable that thanks to the OTTs, which seem to have rejected the Indian rom com firmly in favour of crime and drama as genres, its corresponding ripple effect in popular culture, seems to be translating into the popular fiction market as well. Is the age of rom com or chick lit — that term despised by Chauhan herself — over? At least for a phase? That is a question one cannot help but ask. (Meenakshi Madhavan Reddy’s new novel, still in manuscript form, is a murder mystery too.)

I must confess, my next question is somewhat shameful.