The book is all about izzat, mother’s tears, father’s pride, a child who needs a mother, a mother who needs the company of her son. 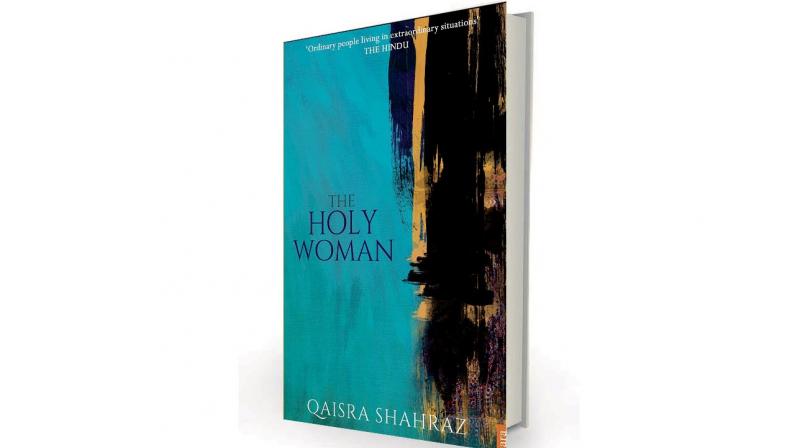 Khushwant Singh, after reading a much publicised but not-so-acclaimed novel Lajja by Taslima Nasreen, had categorically advised her to learn how to write a novel. I was wondering what would have been his reaction to the present work, The Holy Woman? Perhaps just one word — Dragon-fruit! With blood red colour and tentacles on the outer surface, but a bland atta-halwa inside!

The book centres on the notion of patriarchy and the fact that its many manifestations, irrespective of caste and class, are aimed at establishing one age-old dictum — that a woman “…is like a ship on a journey, and doesn’t know which way she is heading… Like all ships, hers will eventually have to return to its harbour” (page 508). No prize for guessing that the much cherished harbour is the husband and family. But life is also a “Street Car named Desire” and there seems to be a battle between desire versus devotion and holiness versus happiness.

Unlike Tehmina Durrani’s personal account of patriarchy in My Feudal Lord, this debut novel is basically a story about Zarri Bano, a young beautiful daughter of a rich Muslim landowner. With her “green eyes, curly hair and dimpled cheeks”(you’ll find this description on every second page and it literally tests your patience), Zarri Bano claims to be a feminist but with “conditions applied”. She declares, “I am a free woman. I will decide if I want this or any other man”(page 11) but “don’t be fooled by the modern image that confronts you. I may look the part, but on the inside I am very much a product of my clan”(page 50). Zarri Bano falls in love with Sikander and wants to marry him but after a tragic death of her only brother, her life and destiny takes a different course altogether. Zarri Bano’s father, Habib Khan, with his eyes as cold as the Kashmiri mountains (page 18), decides to make Zarri his heiress and in order to keep the land within the family, forces her to become a Shahzadi Ibadat — a woman wedded to her faith. One cruel statement by her father “…you want a man in your life”, silenced all her protests, using sexuality as ammunition. The father-daughter relationship has shades of Electra Complex though only from the father’s side who is unable to share Zarri Bano’s love and affection with any other man. The veiling ceremony of Zarri Bano, her transformation from a worldly woman to a holy woman, should have been the most gripping part of the book, but ironically the description is so lifeless that it fails to move you and feel the pain of a young woman being sacrificed in the name of tradition and honour.

This was not the only betrayal Zarri Bano had to face. As she slowly adjusts to her new role and new identity as Shahzadi Ibadat which gives her freedom and an opportunity to travel around the world, and at the same time, burqa becoming her second skin, she receives another jolt when her younger sister is married to Sikander, the only man she had ever desired. The story of Holy Woman, then, slowly but surely turns into Hum Aapke Hain Kaun.

The book has its own set of irritants — irksome repetitive description of Zarri Bano’s beauty, dramatic dialogues and expressionless use of the language. Here’s a tiny glimpse—”Please, Sister Sakina, come and sit on this armchair”. “Thank You. Sakina went over to the armchair and sat down”(page 159). The 560-page book is full of sermons and dialogues like, “No, Habib, No”(page 19); “No, my son, No” (page 311); “No, Mother, No”(page 64).

There are some spelling mistakes as well — the years as he years (page 80). There are chapters as short as only of three pages (chapter 39). The book provides some wrong information as well. For instance, mention of Imran Khan and Jemima Goldsmith as happily married. It is really surprising specially when the book is published in 2017 and the writer lives in Manchester. Qaisra Shahraz seems to be ignorant of Imran Khan’s second marriage and Jemima Goldsmith’s links with Hugh Grant and Russell Brand.

The book is all about izzat, mother’s tears, father’s pride, a child who needs a mother, a mother who needs the company of her son, women saying No to men and men making them putlis (puppets), and so on. In addition to this, there are chapters fully devoted to Islam, Hajj, burqa, inheritance rights, segregation of the sexes, benefits of daily prayers, etc. No wonder, the work appears to be a guidebook on “How to be a Good Muslim Woman”.

One last advice or warning— Those with a habitus of reading books of the likes of Salman Rushdie, Günter Grass, Gabriel García Márquez should keep a safe distance from The Holy Woman, lest your act will be termed as “juvenility of the adults”.

And as if it was not enough, there are three books forthcoming in 2017. Our reaction is, “No, Qaisra, No”! Though, like your television serial Dil Hi To Hai, The Holy Woman can be a superhit drama.