Book review: Our lives, our stars

The book sends out the message that our lives are pre-ordained, that we are all here to fulfil certain karmic obligations. 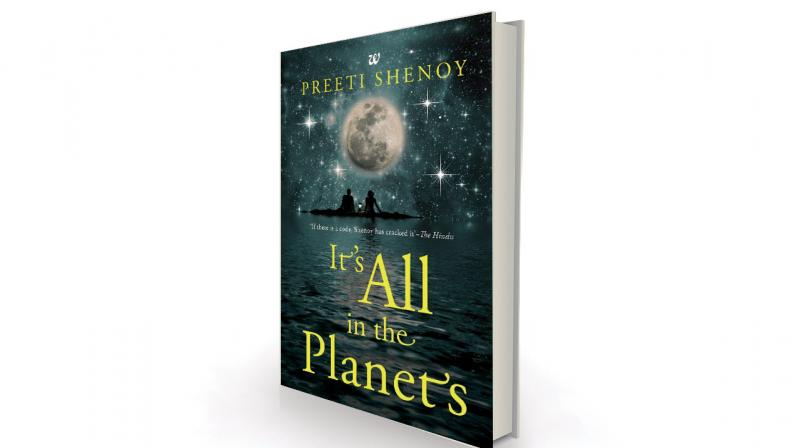 It’s All in the Planets by Preeti Shenoy Westland, Rs 225

The title of Preeti Shenoy’s book, It’s All in the Planets, gives a hint about what the plot is all about. For astrology buffs this book is a gondsend. Twenty-seven-year-old Aniket, podgy, boy next door and a Leo, meets 32-year-old Nidhi, a Sagittarian, in the Shatabdi Express that’s going to Chennai from Bengaluru.

Conveniently, since they are sitting next to each other, Nidhi overhears Aniket’s conversation with his friend and colleague Subbu, about the letter his girlfriend Trisha, a model, has emailed him. Nidhi and Aniket’s conversation starts when he apologises for talking loudly and she remarks that he seems to be having girlfriend trouble. They start off by asking each other about their professions. Nidhi has chucked her high-paying corporate job in favour of teaching pottery at a studio called Mitti, while Aniket is a software engineer. Soon they arrive at the Chennai station and Aniket realises that Nidhi has left her book behind.

With the help of Google, Aniket finds her Facebook page and sends her a message while she is updating her blog where she discusses relationships. They decide to meet for lunch.

By then two things happen; Aniket is forced by his parents to meet a girl for marriage purpose because he is unable to tell them about his girlfriend as she has asked him for “breathing space”, and because she has sent him a long email, issuing an ultimatum: she tells him to lose weight, cultivate a hobby, give her surprises, get her gifts, or else...

At this point, if Aniket was sensible, he should have dropped his girlfriend and moved on. But if he had done so, then there would have been no need for this book.

When Aniket meets Nidhi for lunch, he requests her to be his relationship coach and help him get back on track with his girlfriend. Nidhi, who has her own set of problems — in the form of her obnoxious fiancé who keeps badgering her for marriage — agrees to be his tutor. I did briefly wonder why she had agreed when she herself wasn’t in a great relationship, but all her advice seemed to be practical. But whether or not it worked in Aniket’s case, is something you have to read the book to find out.

Though the story doesn’t have anything new to offer, you can’t help but fall in love with Aniket. Shenoy brings to life the serious techie who is eager to please his demanding girlfriend. Written in the first person, with both Aniket and Nidhi narrating alternate chapters, what I loved about the book were the astrological predictions at the start of each chapter, a sort of harbinger of what would happen next. The book sends out the message that our lives are pre-ordained, that we are all here to fulfil certain karmic obligations. I had read one of Shenoy’s earlier books and, to be honest, wasn’t much impressed. But It’s All in the Planets is a vast improvement in terms of writing, plotting and character development. The book is a good travel companion, meant to while away the hours on a long journey.