To finish Hindu state project, Modi has to return to power

The past five years have been very special for the politico-religious far right in India associated with the country’s religious majority. 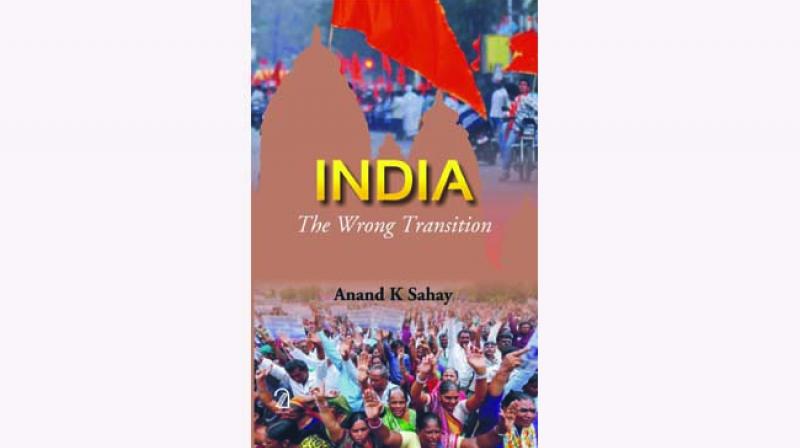 This is an extract from the introduction of Anand Sahay’s just-published book India: The Wrong Transition. Excerpted with permission from the publishers, Aakar Books:

In the past five years, since the advent of Prime Minister Narendra Modi on the scene, India finds itself in the throes of messy developments and institutional subversion.

For votaries of the special genus called Hindu Rashtra, or a Hindu-supremacist re-ordering of India that can only be brought about through a denigration of the core values of India’s present Constitution, relative success in the near-term of the experiment begun under Modi depends crucially on the BJP returning to power after May 23 — when the poll result for parliament is due — with a majority of its own, as in 2014.

Should this fail to materialise, the sustained work done for the Hindutva cause under the leadership of the current prime minister is at risk of dissipating, though ideological battles will not cease.

The past five years have been very special for the politico-religious far right in India associated with the country’s religious majority. This element has gained the opportunity to build a scaffolding on which to fabricate an edifice of a certain type. Such a prospect had not been yielded when the late Atal Behari Vajpayee, the first prime minister from the RSS-BJP fold, came to office in the late 1990s.

The demolition of a medieval mosque in Ayodhya in 1992 under the aegis of the RSS, the fount of Hindu Rashtra inspiration which has spawned dozens of ideologically spirited outfits that do not balk at violence, and the simultaneous movement to build a Ram temple where the mosque had stood, had helped turn the BJP into a mass party.

For the first time this Rightist force was able to extend its reach into northern India’s hinterland and could, on the basis of provocative pseudo-religious slogans, successfully tap into the votes of non-privileged Hindu caste groups — the OBCs (intermediate caste groups categorised as such on the basis of educational and social backwardness), and the dalit (the former untouchables of Hindu society) sections.

This was great going for a party that was grounded in upper-caste, Hindu elite, histories and traditions which it sought to present as India’s national values that were at the core of Indian culture. But the tendency had not been forceful enough to give the BJP of those years a parliamentary majority of its own.

In the Modi period, the RSS-BJP were helped by a key factor. Their main ideological and political rival on the national stage, the Congress party, which  was largely instrumental in creating the template of  post-colonial India, had an insignificant presence in the Lok Sabha.

It had fared poorly in the parliamentary poll of 2014, although in the preceding ten years the two governments it led gave strong economic growth on a decadal average basis, lifted more people out of poverty than any other government in a comparable time frame, passed important legislation in the field of citizens’ right to information, and created what is arguably the world’s largest guaranteed rural employment scheme for the poorest sections. But the Congress party’s leadership appeared watery and uncharismatic.  Its organisation had weakened visibly. These had caused its influence in the public sphere to erode over time.

What’s more, while Congress’ credo — which emphasised pluralism, personal liberties, democracy, a programmatic inclination to raise the lives of the needy through state intervention and balanced regional development, and placed a premium on autonomy of action in the world arena- remained more or less intact, in practice more was expected of the “the party of freedom” to stand up for its core beliefs.

In his election campaign for the Lok Sabha five years ago, the man who would be prime minister formally proclaimed a broad-spectrum persona to attract all, harnessed the energy of the unsuspecting youth by promising jobs and a bright future (the achche din slogan), dog-whistled his way into the hearts of the communal-minded Hindu who finds merit in the idea of disadvantaging the religious minorities, comprehensively won over the Hindu traditionalist, and also paved a path to reach the votaries of the market-alone principle by promising “maximum governance, minimum government”.

Modi also projected for himself a larger-than-life figure, a man of the masses who had risen to the top through hard work and was a “nationalist” to the core. By this, of course, he meant a “Hindu nationalist”, his description of himself in a Reuters interview in the run-up to the 2014 election which earned him plaudits from his expanding constituency. This set up a contrast with “Indian nationalist”. India was evidently changing.

Many loved the “New India” — Modi’s coinage — that was unfolding under the ‘great leader’, but serious fears too came to be expressed. The poor got little out of it, the owning classes didn’t feel they were supported, the unemployed youth were adrift, the farmers seemed to lose hope, and there was violence against Muslims and Christians (mainly the former), against the dalit community, against journalists and intellectuals if they didn’t fall in line, and against the very idea of dissent.

And yet — such was the scale of the support from a craven media, especially television- Modi, in opinion polls that are routinely published on God knows what basis, remains India’s most trusted leader, the safest pair of hands in the country to take us to “glory”, to take us to the point where India will be acclaimed as vishwa guru or teacher to the world — which is actually a demand put forth by the current RSS chief, Mohan Bhagwat.

So disappointing have been the results of government policy in the past five years, the famous journalist-author Arun Shourie, who was a minister in the Vajpayee cabinet, asked with acuity, “There is a lot of sizzle, but where’s the steak?”

Together social media and conventional media have worked to magnify the government’s and the RSS-BJP’s message, and lampooned their opponents. It is, in fact, plausible to argue that while the Modi government is no doubt a creature of RSS ideology and organisation, it may have found it difficult to establish itself if it weren’t for the fawning media, which was responsible for the building of the Modi persona.

In the absence of institutional restraint, and of independent journalism, which is not afraid to excavate the wrong-doings of the rulers and expose the mechanism through which their dark deeds are performed, democracy in India can today be said to be on the brink of a precipice.

It has never been laid so low before, though there have been bad times for democracy in the past and unedifying policy failures.

The Modi government has been unlike any other government India has known. Its actions show that it has been ideology — driven in the extreme, and has limited inclination for the material development of society — which is serious, dogged, time-consuming, business. Its aim appears to be no less than the transformation of both state and society in India along prescriptive religious lines through the misuse of state power.

This has been sought to be done not only through governmental effort and public funds, but also the odious organised actions of a cadre of tens of thousands of persons outside of government — akin to a paramilitary force in civvies — who resort to physical violence and threats, all the while uttering traditional Hindu pieties.